How hot peppers and marijuana could help cure gut problems

Just don't try to fix your colitis with Sriracha 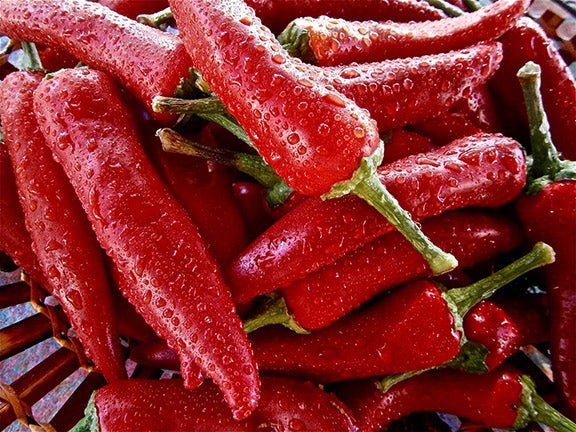 Your gut is something of an immunological mystery.

Unlike the rest of the body, which tends to treat foreign invaders with a singular purpose—seek and destroy—the stomach cannot afford to be so indiscriminate. It exists to help fuel the body, and that means routinely welcoming foreign bodies in the form food.

“If we injected ourselves with the food that we eat, we would have a massive immune response,” said Pramod Srivastava, an immunologist at the University of Connecticut School of Medicine.

When our gut’s immune system starts acting more like that of the rest of the body, the gut gets inflamed and starts attacking its own cells. The end result is illness. Diseases like celiac (an autoimmune reaction to gluten) and ulcerative colitis (one of two types of Inflammatory Bowel Disease, the other being Crohns) occur when the gut’s immune system starts treating food, and our own body, like an interloper. These conditions often leaves sufferers in tremendous pain and at an increased risk of both malnutrition and colon cancer. But if researchers could figure out how to calm down that immunological response, it might be possible to create a treatment.

Srivastava’s recent study in the Proceedings of the National Academy of Sciences suggests we may be one step closer to finding a cure. He found that anandamide, a chemical that the body makes naturally and that is very similar to chemicals found in marijuana, helps calm down the immune system—at least in the guts of mice. If his studies hold up in humans, he says it could eventually lead to a cure for ulcerative colitis.

To understand how Srivastava came to this conclusion it helps to look at his earlier work. Srivastava found that when he exposed immune cells to hot temperatures that the cells became highly activated—in other words, the immune cells went to work. Previous studies have shown that elevated body temperatures (better known as fevers) can help immune cells work better. But what Srivastava wanted to know was why. How exactly did the cells know that it was getting hot in there?

“It was known that there were certain calcium cells that open up in the nerves when they are exposed to high temperature,” said Srivastava. “So, if the hand encounters a hot stove, those calcium cells open, calcium falls into the nerve and that nerve impulse goes to the brain, and we know that it is warm or hot.” It turns out that the same calcium channel is also how immune cells knew that their Petri dishes were getting warm.

But our cells aren’t exposed to capsaicin directly when we bite into a spicy dish. So Srivastava fed the chemical to mice with type 1 Diabetes (which, like IBD, stems from autoimmune inflammation) to mimic our actual exposure. Since the Petri dish experiments showed that heat and capsaicin tended to make immune cells more active, the mice fed capsaicin should have developed more diabetes than the control group. But the opposite happened. Srivastava found that capsaicin didn’t ramp up the immune cells in their guts—it chilled them out. The mice fed capsaicin actually stopped being diabetic.

It turns out something else happens when a mouse chows down on capsaicin. A special kind of immune cell, CX3CR1, also gets activated. And that immune cell tends to suppress immune responses in the gut. Since the body can’t really depend on a steady diet of chili peppers to keep us healthy, Srivastava went looking to see what else binds to the same calcium channel as capsaicin. He discovered that anandamide does.

Anandamide was discovered in the 1980s when researchers were trying to make sense of why our body, especially the brain, has cannabinoid receptors. Cannabinoids, found in marijuana, are part of a class of chemicals that can alter neurotransmission in the brain. Nature didn’t develop those sensors just so humans could get stoned: anandamide is similar to the cannabinoids found in marijuana, but our body actually produces it.

“The person who discovered anandamide had an interest in Indian languages,” said Srivastava. “And in India, the word ‘ananda’ means bliss.”

Nobody knows whether anandamide actually induces a sense of bliss, but mice fed anandamide experienced the same healing effects—stretching from the esophagus down through the stomach—as mice fed capsaicin. Srivastava also discovered that when he gave mice capsaicin, it seemed to stimulate their bodies’ production of anandamide. In both cases, it was ultimately the anandamide that was healing the gut, which suggests that other cannabinoids like marijuana might have a similar effect.

As with all studies, there are some limitations. Srivastava’s work was done in mice, not people. But it does fall in line with anecdotes from IBD sufferers who have found that marijuana relieves some of their symptoms, and other studies that have found that people who eat chili peppers live longer.

Because anandamide is a cannabinoid, it’s pretty heavily regulated—you can’t just give it to humans. As a result, Srivastava hopes to work with public health authorities in Colorado—the land of medical (and recreational) marijuana—to see if legalization has led to any improvement in colitis patients who consume edibles. If it has, that could help Srivastava make the case for a study that repeats his experiment in human patients.

In the meantime? Well, if you live in Colorado and want to try something new for your IBD, you’re sure in luck. But most patients should probably hold off on trying to mimic the study results at home: many IBD patients report negative reactions to spicy foods, likely because they increase stomach acid and often contain nightshade plants. So guzzling hot sauce might not be a safe way to boost your body’s anandamide production.