Beyond Pluto: Meet The New Horizons Spacecraft’s Next Target

This summer, the mission may get funding to travel to a mysterious rock at the edge of the solar system 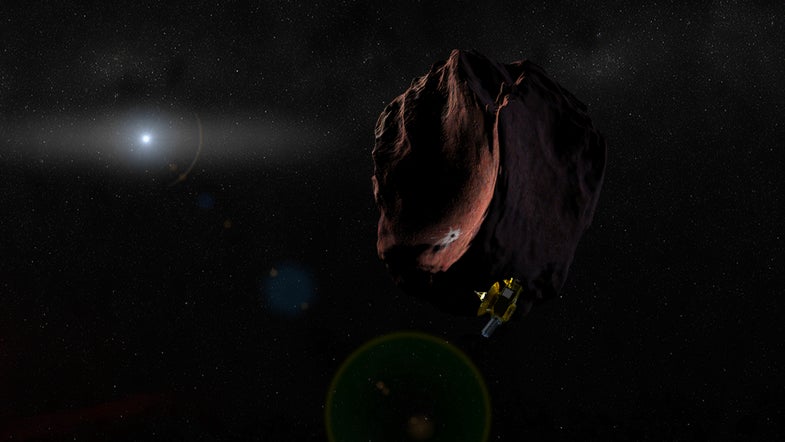 The Pluto flyby was arguably one of 2015’s top scientific achievements, maybe even one of the most memorable moments in the last decade. We now know what our ex-ninth planet looks like, and it’s spectacular. Pluto turned out to have some surprising features like glaciers, nitrogen lakes, ice volcanoes, and the list is growing. The New Horizons mission to Pluto has surpassed everyone’s expectations, and the good news is, the team has no plans of stopping yet. This summer, they’re hoping to win an extended mission to explore another strange new world.

2014 MU69 is the official name of the icy rock that New Horizons hopes to explore next. Not much is known about MU69, but it orbits the sun a billion miles past Pluto, and NASA thinks it could be a time capsule from the earliest days of our solar system.

MU69 is one of several types of objects (or KBOs) in the Kuiper Belt–the ring of rock and ice debris that encircles our solar system. “Scattered KBOs,” like the dwarf planet Eris, were flung outward by the influence of Neptune, explaining their highly elliptical orbits. “Resonant objects” like Pluto are locked in a stable orbit with Neptune. MU69, on the other hand, is a “cold classical object,” meaning it has gone relatively undisturbed since the beginning of the solar system.

“The Kuiper Belt in general, and the cold classical objects especially, are the most primordial objects,” explains Simon Porter, post-doctoral researcher on the New Horizons mission. “They were never pushed around by the giant planets; they’re pretty much where they formed and haven’t been disturbed except for occasionally bumping into each other.”

The term “cold classical” doesn’t actually refer to the temperature of the objects, but rather that their orbits don’t bring them close to anything else.

Humankind has never visited a cold classical object before, so this flyby, if it gets funded, could be huge for filling in gaps about how our solar system formed some 4.6 billion years ago.

Because MU69 is so small and so far away, ground observations aren’t able to specify its exact brightness and size, but the educated guess is that MU69 is about 20-30 miles across. The team hopes to find a moon at MU69 as well.

“We can’t conclusively say if it has moons or not based on the Hubble images,” says Porter. “For the big cold classicals, something like 30 percent have known moons. There’s a pretty good chance that this thing’s got at least one satellite. It could be a small one. It could be a big one, could be several. We really don’t know.”

Porter and the team are also looking forward to counting the craters, if any, on MU69. “We are already using the craters on Pluto and its moons to constrain how many small Kuiper Belt objects there are. MU69 is an even better test, as it sees much fewer potential impactors than Pluto, we think.”

In November the New Horizons team executed a series of four fuel burns to send the spacecraft in the direction of MU69, even though the team is still awaiting an official mission extension approval from NASA. “The spacecraft is on its way to MU69, but in order to actually have the flyby, NASA has to approve keeping the spacecraft on for that long,” says Porter. “If they don’t then we would literally turn off the spacecraft this year. ”

New Horizons was one of the least expensive NASA missions to date, costing only $700 million, which works out to a mere $0.15 per person per year. Because of its small original budget and what the research has already yielded, the team is hopeful about getting permission to study MU69. If the mission extension does get approved, the science team will turn on the spacecraft’s instruments while it flies through the Kuiper Belt, studying other bodies along the way.

Team members John Spencer and Marc Buie started searching for the second flyby target almost immediately after the mission was funded in 2003 to see whether or not it was a plausible option. Because Pluto is currently passing by our Milky Way’s galactic core, the brightness of the dense star field made it difficult to find anything, let alone an object convenient enough to visit. The search began on the ground and then moved to the Hubble Space Telescope, leading scientists to the path of MU69.

The flyby is due to take place on New Year’s Eve of 2018, but by the time the team receives the signal of confirmation it will be 2019. At the time of the flyby, MU69 will be 4.2 billion miles away from Earth. Because of this extreme distance it will take the signal from New Horizons 6.2 hours to reach Earth, and that’s just one way. New Horizons will sweep past MU69 at a blistering 45,931 feet per second. During the flyby it’ll turn on its imaging instruments, RALPH and LORRI, as well as its UV imaging spectrometer, Alice, to gather data about MU69’s surface composition, brightness and size. The details will help to complete the puzzle of the Kuiper Belt.

Right now there are more questions than answers when it comes to average cold classicals like MU69. There are no clues as to its surface composition, whether or not it has craters, or what types of surface geology it might have, if any.

“We’ve never been to one of these objects before, so we really have no idea what it’s like,” says Porter. “We’ve been to comets, but comets are degraded versions of these things. We’ve been to moons that are about that size, around Pluto, around Saturn, but they’re moons so they’re formed in a completely different way. They’re probably made of completely different stuff. It’s the last unknown type of object in the solar system that we’re going to visit.”

The team expects to hear back from NASA sometime this summer with a yea or nay on a mission extension. Since there’s already a perfectly good spacecraft en route, let’s hope that NASA chooses to get more science done while we’re in the neighborhood.