The stars are aligning to let Lucy visit a record-shattering eight asteroids. 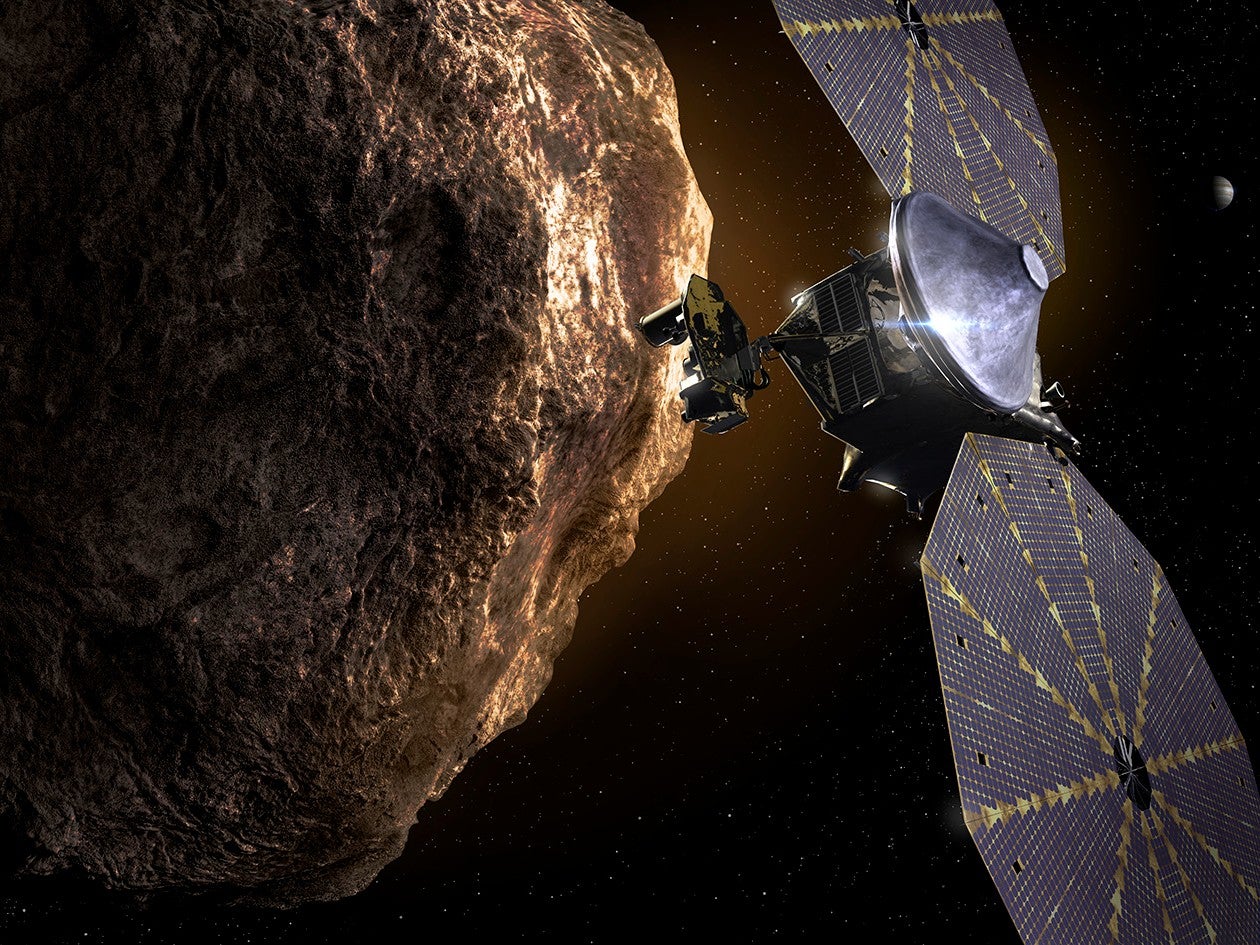 This illustration shows the Lucy spacecraft passing one of the Trojan Asteroids near Jupiter. Southwest Research Institute
SHARE

Today, NASA engineers will begin packing a freshly built spacecraft, Lucy, into the tip of an Atlas V rocket. When Lucy launches in October, it will attempt a journey unlike any previous mission. Over the course of 12 years, the wandering spacecraft will fly by a whopping eight asteroids, mostly in the vicinity of Jupiter.

The scientists behind the mission think of themselves as cosmic paleontologists, naming the mission after the renowned “Lucy” skeleton, which revealed a new chapter of human evolutionary history. The Lucy spacecraft will chase down a handful of Trojan asteroids, fossil-like fragments left over from Jupiter’s formation that the gas giant has harbored in two gravitationally protected zones for the last 4.6 billion years. From Earth, the Trojans show up only as specks of light. The $981 million mission represents NASA’s bid to examine the planetary fossils up close.

“Whatever Lucy finds will give us vital clues about the origin of our solar system,” said Lori Glaze, the director of NASA’s Planetary Science Division, at a press conference on Tuesday.

More than a dozen spacecraft have journeyed to asteroids before (a few particularly daring machines have even snagged samples), but most previous missions have visited at most two asteroids or comets. Lucy will fly by four times as many targets.

After launching, the spacecraft will stay close to Earth for a few laps around the sun, using Earth’s gravity to fling it farther and farther toward Jupiter’s orbit. En route, it will test its instruments on a main-belt rock, Asteroid 52246 Donaldjohanson, which was named in 2015 for one of the paleoanthropologists who discovered the Lucy skeleton.

In 2027, the main event will begin: The vehicle will reach the “leading” swarm of Trojan asteroids, which races ahead of Jupiter in a zone where the planet’s gravity neutralizes the sun’s gravity, creating a sheltered pocket where thousands of space rocks have piled up over the eons. There, Lucy will whizz by a series of four asteroids, studying each from about 600 miles away.

One highlight of this group will be Eurybates, a 40-mile wide asteroid that hosts its own half-mile satellite asteroid orbiting around it. The mission planners were thrilled to spot this itty bitty bonus companion with the Hubble Space Telescope only in 2018, well after Lucy’s path had been planned.

Over the next six years, Lucy will swing back toward Earth for another boost that will put it in an orbit trailing behind Jupiter, where it will fly by one last target in a second swarm of Trojans that chase the gas giant. Its final destination will be a double header, twin asteroids swinging around each other, that bring the total number of space rocks reached to eight. “We’re visiting more asteroids than any other spacecraft in history,” said Hal Levison, Lucy’s principal investigator from the Southwest Research Institute in Boulder, Colorado, at the same press conference.

The fact that a single looping orbit could bring the spacecraft to so many asteroids, all zinging around the sun on their own paths, took even the mission architects by surprise. They had initially set out to study two asteroids of different colors, red and grey. But the planets aligned to offer them a much richer odyssey than they had imagined.

“This is an amazing trajectory that will not be possible again in the near future,” Levison said. “A lot of it was simply just luck.”

In addition to passing by a record number of asteroids, Lucy will also venture farther from the sun than any other solar-powered vehicle in history. To survive in deep space, Lucy will carry two round solar arrays flanking the spacecraft’s main body. Tipped on end with the arrays fully extended, Lucy would stand as tall as a five-story building. That collecting area will generate about 500 watts of power at Jupiter, not quite enough juice to run a hair dryer.

But it will be more than enough to power Lucy’s handful of electricity-sipping cameras and sundry instruments, which researchers will use to record as much data as they can during each hours-long flyby. A color camera will study what an asteroid’s surface is made of. An infrared camera may pick up traces of water embedded in minerals. A high-resolution camera will look for rings and satellites while also counting craters on each target’s surface. Another infrared instrument will monitor how each asteroid releases heat. And by tracking how much Lucy lurches toward a target due to its gravitational pull, researchers will be able to gauge each asteroid’s mass.

Together, the readings will take objects that researchers know only as single red or grey pixels in their telescopes, and transform them into a diverse range of time capsules, each untouched for billions of years.

“Despite the fact they are in a small region of space, they’re very physically different from one another,” Levison said. “This is telling us something very fundamental about the formation of the solar system.”

A future of possibilities

After the last flyby in 2033, NASA may extend Lucy’s journey. The solar panels, for instance, have been designed to keep working even if a few sectors die of old age or get smashed by micrometeorites. “We can take a hit and we can survive it,” said Rich Lipe, a spacecraft program manager at Lockheed Martin, where Lucy was built.

If Lucy remains spry into the mid-2030s, Levison already has a list of more than a dozen additional objects the spacecraft could visit during an extension. When the mission eventually does end, Lucy will continue tracing out the six-year loop between the leading and trailing Trojans for the next million years, Levison estimates, becoming a fossil of its own.