Pluto may be made up of a billion comets

But we won't know until we get there. 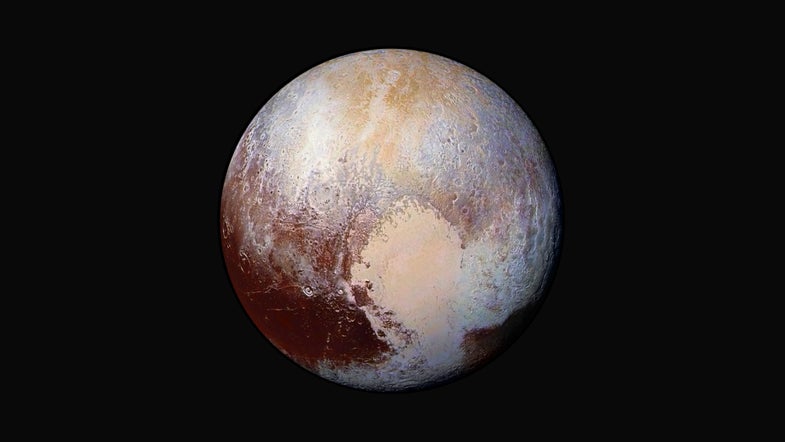 Perhaps we’re looking at Pluto the wrong way. Planet, dwarf planet—this semantic debate might be irrelevant, because in reality. . . maybe Pluto is actually sort of a giant comet? In a paper published this week in the journal Icarus, scientists from the Southwest Research Institute pitch a new theory that Pluto might really just be the aggregation of a bunch of comets. Billions of them.

Scientists typically thought Pluto was born in the usual way for a planet: in the ancient infancy of the solar system, a rocky core formed amidst a slew of gas and dust, and gravity slowly accreted more and more material, leading to a small spherical ball we now call Pluto. But more recent findings in the ‘90s of other small icy objects like Pluto in the Kuiper belt suggested some other, more unique shared origin story to unravel.

“The current paradigm is that bodies in the outer solar system were built by the accretion of rocks and ices,” says Christopher Glein, a scientist from the Southwest Research Institute and lead author of the new paper. “We think that comets are leftover building blocks from the formation of larger bodies, and previously, it was suspected that Pluto might have formed from cometary building blocks, but we didn’t have the data to really test that. This study is trying to take the next step forward in that process.”

The data for this paper comes from two sources: the New Horizons mission in which scientists were able to make observations of a nitrogen-rich glacier on Pluto called Sputnik Planitia; and the chemical composition of comet 67P/Churyumov–Gerasimenko, studied by the European Space Administration’s Rosetta spacecraft (RIP). The paper’s authors found that the glacier’s nitrogen content was similar to what other models would predict if Pluto had been formed by the mashup of billions of comets like 67P.

“We first used information from New Horizons,” says Glein, “to estimate how much nitrogen is on Pluto and has escaped from the atmosphere of Pluto,” setting a constraint that represents a target for theoretical models. “Then, we used the nitrogen abundance from Rosetta, and scaled that up to the mass of Pluto. What was really interesting is that the two approaches give values that agree well.”

This new “giant comet” model is jarring, but so was the discovery of an atmosphere on Pluto, and hints that it might possess a subsurface ocean. But for safe measure, the researchers also developed what they call a “solar model” that suggests Pluto formed from cold ices containing an abundance of nitrogen similar to that in the sun. “The solar model provides a lot more nitrogen than we see at Pluto,” says Glein. “But, we can’t rule out this model because we lack a detailed understanding of how much nitrogen has escaped from Pluto’s atmosphere over its history.” New Horizons is “just a snapshot in time,” and there’s no telling how nitrogen rates changed over the course of billions of years.

Like all peculiar new ideas, this one is far from bulletproof. According to Glein, the biggest limitation to the model is that New Horizons detected a pretty low abundance of carbon monoxide on Pluto, even though comets tend to carry high amounts of carbon monoxide. Much of this may have been buried deep under Sputnik Planitia, so New Horizons would obviously miss detecting it at the surface, and a subsurface ocean could have led to the destruction of carbon monoxide as well. “I find the latter hypothesis to be especially intriguing, because there is other evidence from New Horizons suggesting the existence of such an ocean,” he says.

In addition, while Glein thinks most scientists have received the study warmly, he does admit some folks have raised issues with the “giant comet” connotation. “I’m not saying that Pluto is a comet,” he says, “but instead its composition could be related to a model of a super-sized comet.” There’s a lot of nuance here that could be easily lost if this distinction is not explained carefully.

Ultimately, the only way to confirm or refute this new theory will be in studying Pluto directly. That means going beyond a flyby mission like New Horizons, and sending an orbiter—and maybe even a lander—to Pluto. Glein votes for landing on Sputnik Planitia, for obvious reasons, where we could sample some of those cool glacial ices and analyze them with a mass spectrometer. It’s difficult to see a mission like that getting greenlighted any time soon, but the success of New Horizons means the clamor for going back to Pluto will only get louder and louder.