It's a serious problem, but a little laughter goes a long way 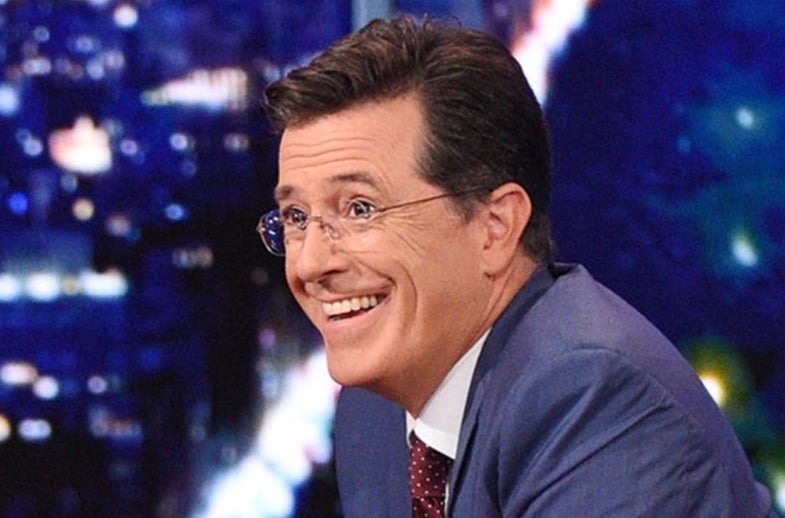 Last year, ABC News devoted just 13 minutes of airtime to covering climate change in its nightly and Sunday news shows — about as much as CBS’s The Late Show with Stephen Colbert. This may be as much an indictment of ABC’s news coverage as it is a testament to Stephen Colbert.

“It is certainly notable that Colbert spent as much time as he did on climate change, given that his show is a comedy variety show,” said Rutgers professor of communications Lauren Feldman. “I think it reflects a continuation of the attention he paid to the issue on The Colbert Report.”

Feldman explained that TV satirists are regularly pulling double duty as America’s ambassadors to science — whether geeking out with Neil DeGrasse Tyson or riffing on the latest climate science. Colbert, Seth Meyers, Jon Oliver, Jimmy Kimmel, Trevor Noah and (until recently) Jon Stewart have lent valuable airtime to a vital issue that garners too little attention in traditional news programs.

What’s more remarkable than the sheer amount of time given over to climate change is the fact that late-night comics are actually able to make the research accessible — serving up the latest science with a side of humor.

“People watch these comedy shows in large part to be entertained. They’re not there for the science. They’re sometimes there for the politics,” said Feldman. Airtime on comedy shows, Feldman said, is “going to get a whole lot more people paying attention to science.”

In a 2011 study, Feldman and her colleagues found that people who watched The Daily Show and The Colbert Report were more likely to follow news about science and technology—and particularly global warming. The effect was most pronounced among viewers without a college education.

Authors credit a sort of bait and switch. People tune in to The Daily Show because they want to laugh, and they end up learning about climate science. The study finds that “satirical news helps information about science and the environment reach a broader swath of the American public than ordinarily seek out such information.”

Unlike members of the traditional news media, comedians can have a critical voice. They are in a position to skewer climate change denial. Earlier this year, Jimmy Kimmel assembled a group of scientists to clear the air on global warming.

Jon Oliver adopted a similar tactic. He lambasted news outlets that give equal time to scientists and climate deniers. “If there has to be a debate about the reality of climate change — and there doesn’t — then there is only one mathematically fair way to do it,” said Oliver. He then brought out 97 scientists to spar with three climate skeptics.

According to Feldman, satirists tend to practice what they preach. In a 2013 study, she found that The Daily Show and The Colbert Report rarely brought on climate deniers as interview guests. Stewart and Colbert were more likely to feature scientists, science writers, and other environmental experts (a practice Colbert has kept up in his new job).

“By virtue of the people they were interviewing about climate change, they were able to highlight other dimensions of the issue, whether it be economic implications or public health implications or some of the underlying morality issues,” said Feldman.

That’s not to say satire isn’t without its stumbling blocks. Comedians rely heavily on sarcasm, Feldman explained, and not everyone is in on the joke. Jon Stewart might quip that climate change is a hoax because it feels cold in January. Some viewers won’t understand that he’s being sarcastic. On them, the humor — and the social commentary — is lost.

Feldman explained that late-night comics also tend to make light of the climate change. “I’ve long warned you about the dangers of global warming: melting ice caps, rising seas, reusable grocery bags,” said Colbert in a 2014 segment. And, like the traditional news media, they are prone to focus on political conflict, devoting ample time to lampooning partisan gridlock and government inaction.

The greatest shortcoming of satire, however, is that it can be divisive. To some, satire signals a shared understanding, but to others it can feel like an attack. For viewers who dismiss climate science, jokes about global warming deniers can feel alienating.

“I think, fundamentally, comedy has the potential to disarm people and persuade people with different views, because of the way in which we process comedy. Our defenses are lower. We’re less prone to counter-arguing,” Feldman said. “But if the humor is built on an attack on people who don’t agree with you, that’s not going to get us anywhere.”

Feldman acknowledges that crafting comedy around climate change is no easy task. “I’m not a comedian, and I would never be any good at writing this stuff,” she said. It’s hard to squeeze laughs from such a complex, frightening, and divisive issue.

Jena Friedman, a comedian who worked on The Daily Show with Jon Stewart and the Late Show with David Letterman, also acknowledged the difficulty of writing about climate change. “It’s definitely on my mind, but I’ve yet to find a way to make it ‘funny,'” she said. “As a comedian, I really do believe comedy can be an effective tool at speaking truth to power, and I do try to do that.”

For Feldman, this is key. Satirists can share science with viewers who might not otherwise care. Those viewers, once armed with the facts, can be more informed citizens and more critical news consumers.