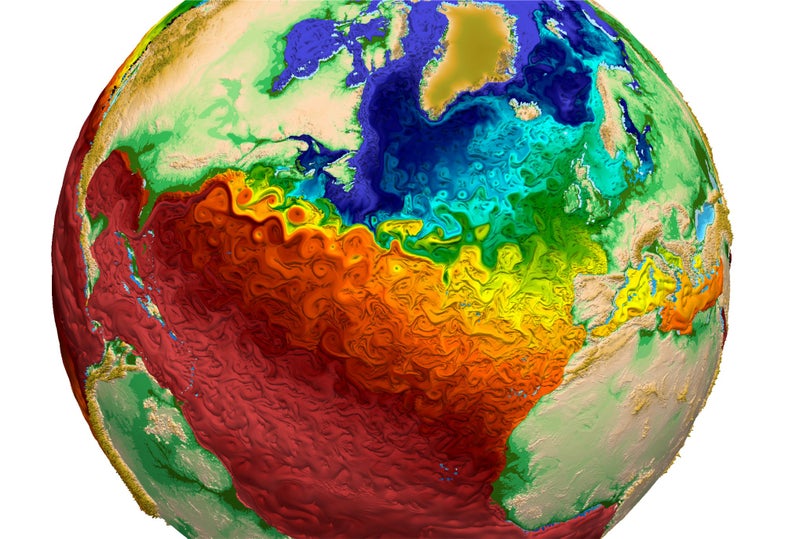 Climate scientists tell us it’s going to get hotter. How much it rains and where it rains is likely to shift. Sea-level rise is apt to accelerate. Oceans are on their way to becoming more acidic and less oxygenated. Floods, droughts, storms and other extreme weather events are projected to change in frequency or intensity.

But how do they know what they know?

For climate scientists, numerical models are the tools of the trade. But for the layperson — and even for scientists in other fields — climate models can seem mysterious. What does “numerical” even mean? Do climate models take other things besides the atmosphere into account? How do scientists know if a model is any good?

Two experts in climate modeling, Andrew Gettelman of the National Center for Atmospheric Research and Richard Rood of the University of Michigan, have your answers and more, free of charge. In a new open-access book, Demystifying Climate Models, the pair lay out the fundamentals. In 282 pages, the scientists explain the basics of climate science, how that science is translated into a climate model, and what those models can tell us (as well as what they can’t) — all without using a single equation.

AtmosNews sat down with Gettelman to learn more about the book, which anyone can download here.

What was the motivation to write this book?

There isn’t really another book that sets out the philosophy and structure of models. There are textbooks, but inside you’ll find a lot of physics and chemistry: information about momentum equations, turbulent fluxes — which is useful if you want to build your own model.

And then there are books on climate change for the layperson, and they devote maybe a paragraph to climate modeling. There’s not much in the middle.

This book provides an introduction for the beginning grad student, or someone in another field who is interested in using model output, or anyone who is just curious how climate works and how we simulate it.

What are some of the biggest misperceptions about climate models that you hear?

That’s because the energy that warms the Earth, which radiates from the Sun, and is absorbed and re-emitted by Earth’s surface — and also by greenhouse gases in the atmosphere — is part of the same spectrum of radiation that makes up radio waves. If we didn’t understand electromagnetic waves, we couldn’t have created the technology we rely on today. The same is true for the science that underlies other aspects of climate models.

But we don’t understand everything, right?

We have understood the basic physics for hundreds of years. The last piece of it, the discovery that carbon dioxide warms the atmosphere, was put in place in the late 19th, early 20th century. Everything else — the laws of motion, the laws of thermodynamics — was all worked out between the 17th and 19th centuries.

We do still have uncertainty in our modeling systems. A big part of this book is about how scientists understand that uncertainty and actually embrace it as part of their work. If you know what you don’t know and why, you can use that to better understand the whole climate system.

Can we ever eliminate the uncertainty?

To better understand, it might help to think about the uncertainty that would be involved if you had a computer model that could simulate making a pizza. Instead of trying to figure out what Earth’s climate would look like in 50 or 100 years, this model would predict what your pizza would look like when it was done.

The first thing you want to know is how well the model reflects the reality of how a pizza is made. For example, does the model take into account all the ingredients you need to make the pizza, and how they will each evolve? The cheese melts, the dough rises and the pepperoni shrinks. How well can the model approximate each of those processes? This is model uncertainty.

The second thing you’d want to know is if you can input all the pizza’s “initial conditions” into the model. Some initial conditions — like how many pepperoni slices are on the pizza and where — are easy to observe, but others are not.

For example, kneading the pizza dough creates small pockets of air, but you don’t know exactly where they are. When the dough is heated, the air expands and forms big bubbles in the crust. If you can’t tell the model where the air pockets are, it can’t accurately predict where the crust bubbles will form when the pizza is baked.

The same is true for a climate model. Some parts of the Earth, like the deep oceans and the polar regions, are not easy to observe with enough detail, leaving scientists to estimate what the conditions there are like and leading to the second type of uncertainty in the model results.

Finally, the pizza-baking model also has to deal with “scenario uncertainty,” because it doesn’t know how long the person baking the pizza will keep it in the oven, or at what temperature. Without understanding the choices the human will make, the model can’t say for sure if the dough will be soft, crispy or burnt.

With climate models, over long periods of time, like a century, we’ve found that this scenario uncertainty is actually the dominant one. In other words, we don’t know how much carbon dioxide humans around the world going to emit in the years and decades to come, and it turns out that that’s what matters most.

Any other misperceptions you frequently hear?

People always say, “If we can’t predict the weather next week, how can we know what the climate will be like in 50 years?”

Generally speaking, we can’t perfectly predict the weather because we don’t have a full understanding of all the current conditions. We don’t have observations for every grid point on a weather model or for large parts of the ocean, for example.

But climate is not concerned about the exact weather on a particular day 50 or 100 years from now. Climate is the statistical distribution of weather, not a particular point on that distribution. Climate prediction is focused on the statistics of this distribution, and that is governed by conservation of energy and mass on long time scales, something we do understand.

Did you learn anything about climate modeling while working on the book?

My background is the atmosphere. I sat down and wrote the whole section on the atmosphere in practically one sitting. But I had to learn about the other aspects of models, the ocean and the land, which work really differently. The atmosphere has only one boundary, a bottom boundary. We just have to worry about how it interacts with mountains and other bumps on the surface.

But the ocean has three hard boundaries: the bottom and the sides, like a giant rough bathtub. It also has a boundary with the atmosphere on the top. Those boundaries really change how the ocean moves. And the land is completely different because it doesn’t move at all. Writing this book really gave me a new appreciation for some of the subtleties of other parts of the Earth System and the ways my colleagues model them.

What was the most fun part of writing the book for you?

I think having to force myself to think in terms of analogies that are understandable to a variety of people. I can describe a model using a whole bunch of words most people don’t use every day, like “flux.” It was a fun challenge to come up with words that would accurately describe the models and the science but that were accessible to everyone.

AtmosNews reports on the work of the US National Center for Atmospheric Research.