Revealing the deadly effects of an invisible pollutant 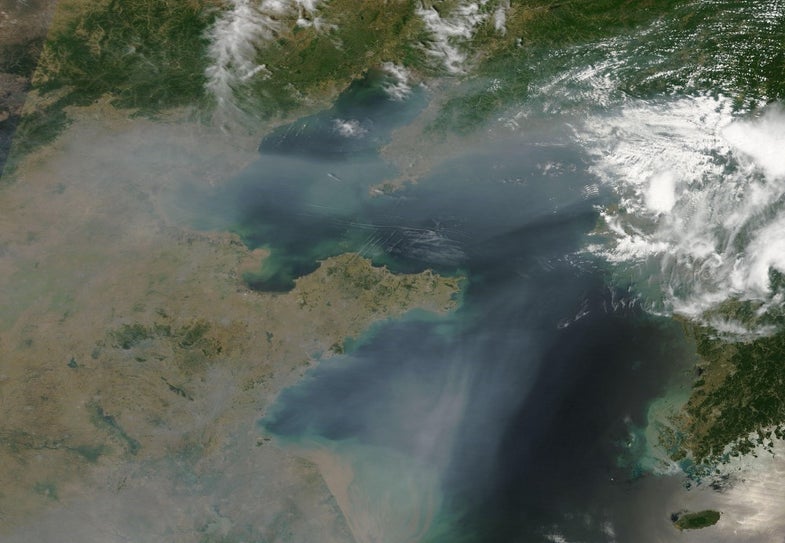 China has become a world leader in the fight against global warming, but its severe winter air pollution has worsened—likely as a result of changing atmospheric circulation caused by climate change, according to a new study published in the journal Science Advances.

While emissions are decreasing in China, the winter haze is not improving “because of a very rapid change in the high polar regions where sea ice is decreasing and snowfall is increasing,” said study author Yuhang Wang, a professor of earth and atmospheric sciences at the Georgia Institute of Technology. “This perturbation keeps cold air from getting into the eastern parts of China, where it would flush out the air pollution.”

The scientists studied these effects in the East China Plains — where Beijing is located — during the winter of 2013, when instruments measured high levels of particulate pollution. These are tiny particles in the air that reduce visibility and can travel into the lungs.

Long-term air quality measurements aren’t available in China, so the researchers had to piece together estimates based on visibility measures and satellite data. To analyze the historical records, they created a new Pollution Potential Index that used air temperature anomalies and wind speeds as a proxy for ventilation conditions over eastern China. Wang said this paper is the first to connect sea ice and snowfall to localized air pollution.

“As emissions were reduced, the ventilation condition worsened,” he noted. “It shows that improving air quality is a complex process and sometimes unforeseen factors require a doubling up of the efforts.”

Sarah B. Kapnick, a research scientist with the National Oceanic and Atmospheric Administration’s geophysical fluid dynamics laboratory who was not involved in the study, called the research “novel for identifying how a large-scale event, low sea ice, coupled with a regional event — snow in Siberia — contribute to altering regional circulation — the East Asian Winter Monsoon — to create conditions ripe for extreme pollution.”

But Kevin E. Trenberth, a scientist with the climate analysis section of the National Center for Atmospheric Research (who also was not involved in the study), cautioned against concluding that climate change was responsible for the anomalous conditions. “Yes, atmospheric circulation matters a lot, and it varies from year to year, and can indeed worsen pollution, or improve it,” he said, adding that a specific link to climate change “seems highly speculative.”

“We know that a lot of variations occur for natural reasons,” said Trenberth. “The effects of Arctic sea ice may be present in late summer, but not so much in winter, largely because in winter the Arctic Ocean is covered with ice.”

Wang said that the impact of global climate change may be unique to China because of its geography and sensitivity to changes in atmospheric circulation. The study results should encourage China to continue to combat climate change. “In this case, emission reductions of both air pollutants and greenhouse gases help,” he said.

The researchers examined sea ice, snowfall and large-scale weather patterns. Their analyses found correlations between stagnant air conditions and Arctic sea ice — which reached a record low in the fall of 2012 — and snowfall in northern Siberia, which had reached a record high earlier in the winter. They then used atmospheric models to study how those factors changed large-scale circulation patterns and pollution over eastern China.

The winter of 2017 saw the same factors, with low levels of Arctic sea ice in September 2016, high snowfall and severe haze. Wang says those factors are likely to continue as climate change disrupts the normal structure of the atmosphere.

Wang said he plans to continue the study using new data from China’s air quality monitoring network. “Despite the efforts to reduce emissions, we think that haze will probably continue for the future,” he said. “This is partly climate-driven now, so it probably won’t get much better in the winter. Emissions are no longer the only driver of these conditions.”