40 percent more likely now than in the 20th century, according to NOAA study

The floods that hit Louisiana last month killed 13 people, and damaged over 60,000 houses. The flooding was caused by intense rains from a storm that was essentially a precursor to a hurricane, and that researchers at the time characterized as a one in a thousand year event.

But forecasters and climate scientists also noted the because of climate change, that 1 in 1,000 years estimate might be off, and that deluges like the one in Louisiana might be more likely now than in the past thanks to human-caused climate change.

Preliminary results from an analysis of the rainfall event in Louisiana by an international group of scientists that included the non-profit group Climate Central and researchers from the National Oceanic and Atmospheric Administration (NOAA), found that not only were those events 40 percent more likely now than they were in 1900, they were also likely to be 10 percent more intense.

“We found human-caused, heat-trapping greenhouse gases can play a measurable role in events such as the August rains that resulted in such devastating floods, affecting so many people,” said Karin van der Wiel, the lead author of the report. “While we concluded that 40 percent is the minimum increase in the chances of such rains, we found that the mostly likely impact of climate change is a near doubling of the odds of such a storm.” 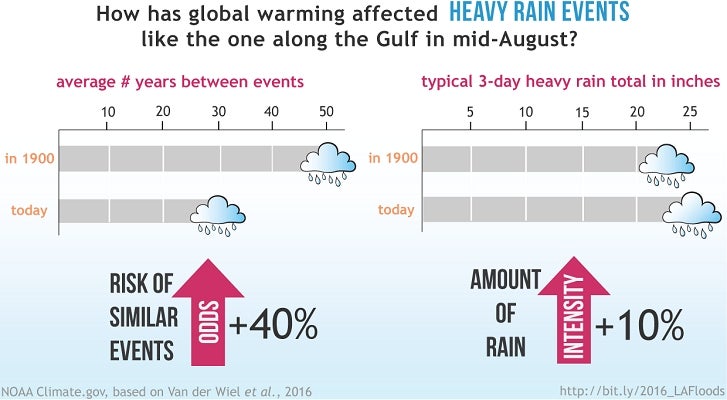 The likelihood of events like the August rains occurring has gone up thanks to climate change.

A paper summarizing the groups’ findings is under review in the journal Hydrology and Earth System Sciences.

The work was conducted by climate scientists all over the world in conjunction with the World Weather Attribution project, which is seeking to accelerate the ability of scientists to analyze what kind of impact, if any, climate change has on large weather events.