How Teachers Can Educate Their Students On The Science Of ‘Interstellar’

Google's education wing has devised school lesson plans based on the movie. One of the best parts of the new film Interstellar is the crazy science permeating the movie’s plot. Wormholes, gravitational forces, relativity, and warped space-time are just a few of the scientific phenomena that play important roles in the astronauts’ deep space journey. Even though the moviemakers take a few liberties with these complicated theories (as some critics have deigned to point out), there is still a plethora of knowledge and research backing up the film’s science and physics.

And for the extra curious student, there’s a way to learn more about it.

Google has teamed up with the creators of Interstellar to launch a program for students excited about the science surrounding the epic space odyssey. And if you’ve seen the movie, you know that the film touches upon a ton of different science topics. To transform the movie’s plot elements into creative learning experiences, Google representatives worked with numerous Google Certified Teachers — teachers who have attended the Google Teacher Academy, a two-day seminar which trains educators on how to use innovative technologies (namely Google products) in the classroom.

Together, they came up with 20 lesson plans based on the film — and the lessons aren’t all about science. “We wanted to give a wide variety of teachers ways to get involved with the film,” Devin Sandoz, the product marketing manager for the program, tells Popular Science. “We had a Latin teacher, a cinema studies teacher, along with physics and science teachers, and we worked with them to create lesson plans that ran the gamut.” 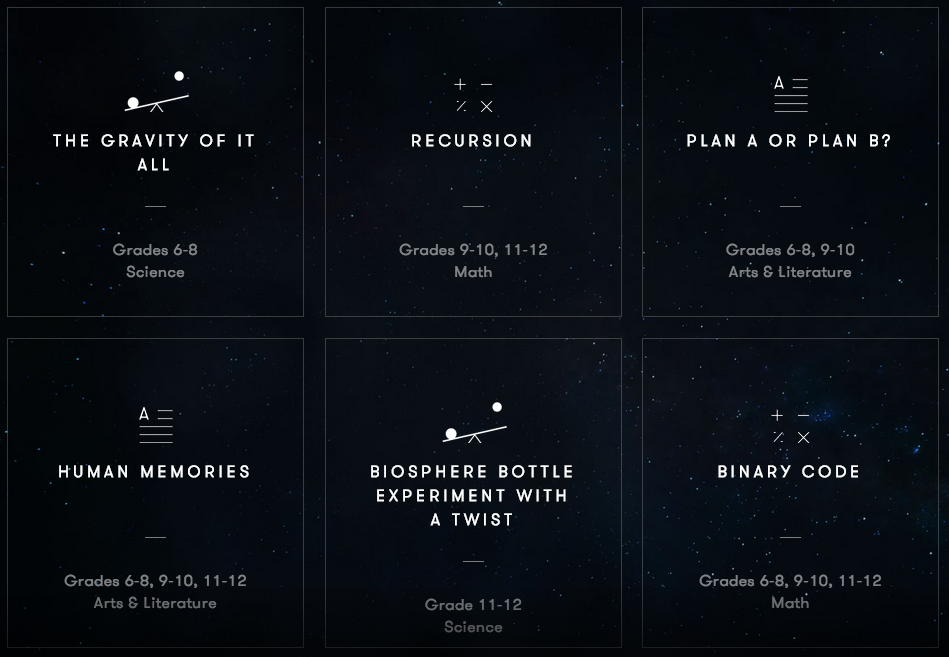 A few of the lesson plans associated with the film

Teachers and students alike can access these lesson plans on the Interstellar website, in a special section just for educators. There’s even an option for teachers to schedule a school field trip to see the movie (umm, awesome!) before they get into all the learning.

The subsequent lessons are structured for different educational levels, ranging from grades 6 to 12, and they aren’t exactly conventional. For example, there’s an option for middle school students to simulate the higher gravitational forces felt on Miller’s planet — the planet closest to the black hole Gargantua in the film. To do this, the students pick one of their classmates, measure his or her weight, and then add extra bags of weight onto them to mimic how it would feel walking on the planet.

There’s also a way for juniors and seniors to recreate the dying Earth depicted in the film by constructing their own biospheres. They can then observe the various effects of nitrogen and oxygen on plant life inside their miniature greenhouses. And in the realm of literature, teachers can instruct students on how to map out comparisons between Matthew McConaughey’s character, Cooper, and the classical Homeric Greek hero. You can check out the other lesson plans here.

So far, Sandoz says that teacher feedback on the program has been quite positive. He believes that there’s something about seeing a science-fiction movie that inspires audiences to learn more about the science that backs it up. “I think back to an experience I had when Jurassic Park came out,” Sandoz says. “Suddenly I was learning about all these species of dinosaur I never know about before. It’s a hunger to know more when you see a movie that awakens in you.”

You don’t have to be a teacher or a student to download the lesson plans on the Interstellar website. But if you’re an ambitious student, you can always grab a copy of theoretical physicist Kip Thorne’s latest book, The Science Of Interstellar, which goes through all of the scientific plot points of the movie in great detail.