Omicron boosters are the future of COVID vaccines in the US

Vaccines customized to fight individual viral strains aren't all that new. The question is, will they work for COVID? 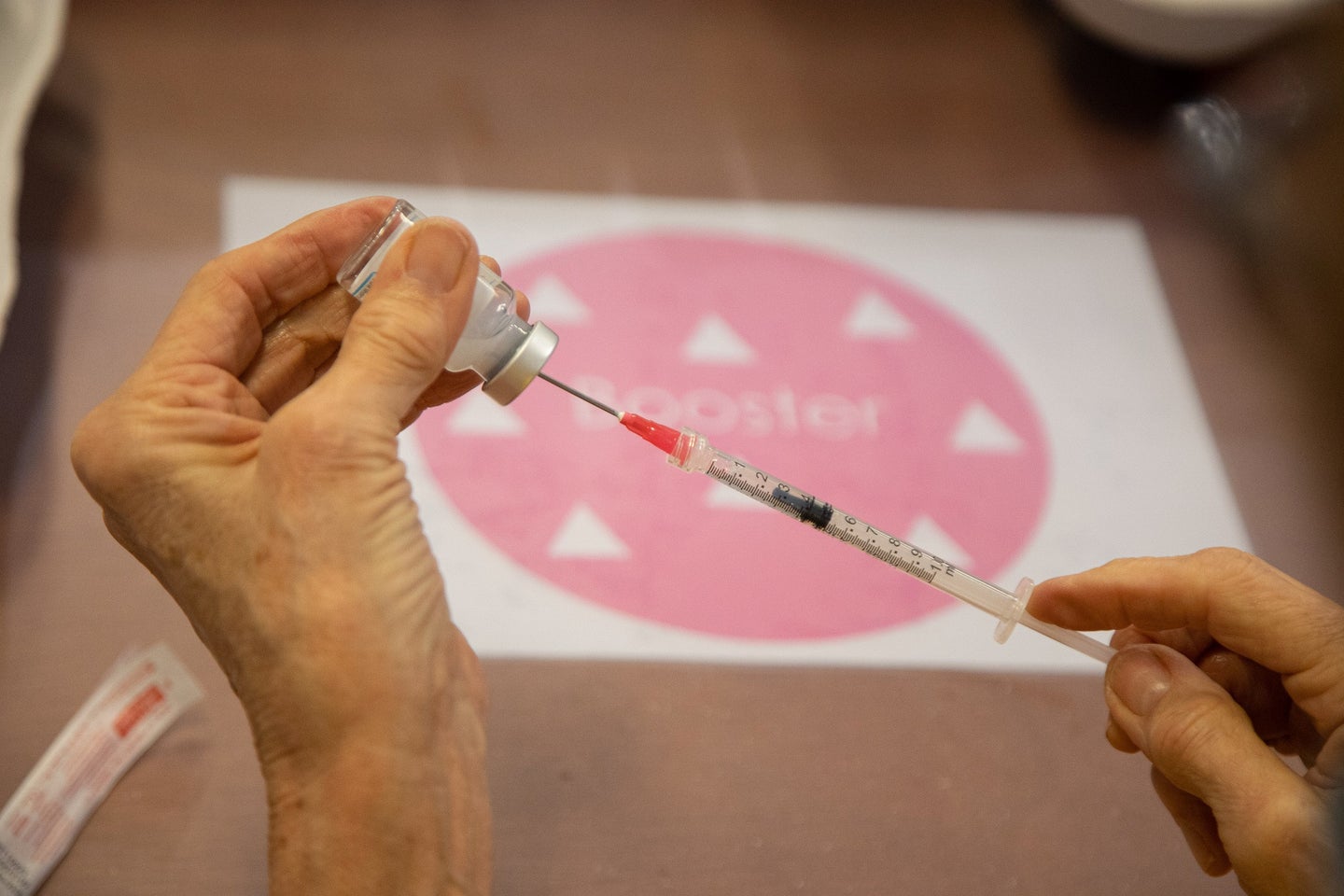 Over Labor Day weekend, pharmacies across the country began receiving shipments of new Omicron-specific mRNA booster shots against COVID-19, after the Centers for Disease Control and Prevention (CDC) and Food and Drug Administration (FDA) signed off on their use last week.

The updated formulas, which will become the standard booster for almost everyone in the US, were developed by Pfizer/BioNtech and Moderna in the 10 months since Omicron first emerged. Although the boosters are almost identical to the original shots, they’re bivalent, which means they can induce an immune response to both the original strain of SARS-CoV-2, as well as the BA.4/BA.5 Omicron strains that currently cause about 90 percent of the country’s COVID cases.

[Related: Long COVID recovery is finally getting the attention it deserves in the US]

“We hope this is the start of moving [COVID boosters] toward a more usual type of vaccine recommendation and process,” said Melinda Wharton, associate director for vaccine policy at the CDC, at a meeting last week on the updated shots. “I’m sure there’ll be some bumps in the road, but it’s an important move toward simpler recommendations, as well as an updated vaccine that we expect to provide broader protection.”

What is a bivalent vaccine?

Let’s start with a refresher: The mRNA vaccines for COVID work by injecting small sequences of quickly degrading genetic material based on SARS-CoV-2 into the body. Your cells read that mRNA like an instruction manual, and build the virus’s signature spike protein. After seeing those home-grown spikes, your body develops antibodies and other immune responses to target the pathogen’s primary weapon during future infections.

The original Pfizer/BioNtech and Moderna vaccines contained instructions for the spike protein of the first strain of SARS-CoV-2, and have remained remarkably effective at preventing severe illness and death from evolving variants and subvariants. But one of the reasons that Omicron has been so able to infect vaccinated people is that it carries a heavily modified spike— roughly 30 mutations away from the original—that resists the antibodies triggered by earlier shots. So, the bivalent vaccines contain a 50/50 mix of mRNA that replicate the original spike protein and the identical spikes of BA.4 and BA.5.

[Related: A deep dive on the evolution of COVID and its variants]

This is generally how vaccines for other quickly mutating viruses are built as well. Most prominently, the annual flu vaccine is a tetravalent formula, designed to train the immune system to recognize four strains of influenza most likely to circulate in a coming year.

The ability to quickly update mRNA shots is one aspect of the new technology that has excited vaccine researchers. But the data used to consider the clinical trial results and approve the updated shots differs from any previously used for COVID.

The CDC and FDA said that they recommended the bivalent boosters based on the “totality of evidence.” In translation, the decision was made using a combination of safety and efficacy data from trials of slightly different bivalent Omicron vaccines, and mouse trials involving the newly authorized updates.

Part of this is because the Omicron variant mutates rapidly. Just weeks after the variant emerged last November, Pfizer, Moderna, and other vaccine manufacturers began developing strain-specific shots. But by the time the companies began to submit data to federal regulators for approval, Omicron had changed shape. When an independent panel of FDA advisors convened in April, it largely agreed that updated boosters should target the most recent BA.4 and BA.5 strains. That forced pharmaceutical companies to begin work on a second Omicron formulation of which human trials are still ongoing.

On September 1, the CDC presented its argument for distributing the shots with the safety and efficacy data collected so far. First, officials from Pfizer and Moderna presented results from human clinical trials on the original bivalent booster that showed it made recipients produce significantly higher levels of antibodies against the Omicron variant—and that those antibodies appeared to last longer, and were better tailored to suit all COVID variants. They then explained that the new BA.4/BA.5 shot produced similar patterns of immune response in mice that had been genetically modified to make human-like cell receptors.

Those results build on several years’ worth of data on variant-specific shots, points out Pei-Yong Shi, an expert in vaccine development and virology at the University of Texas Medical Branch. “The companies have tried multiple modified sequences before,” he says. Moderna and Pfizer made shots for both the Beta and Delta variants that went through human trials.

“I’m totally in support of this recommendation of bivalent boosters,” Shi adds. “I think we can always say we want more clinical data, but if that’s the case, we’re always playing the catch up game.”

Govind Persad, a bioethicist at the University of Denver’s Sturm College of Law, says it’s important not to confuse uncertainty about efficacy with that about safety. “I think there’s reason to be uncertain about whether there’ll be big bumps in efficacy from these BA.5 boosters,” he explains. “But I don’t think there’s much, if any, reason to be worried about there being any new scary side effects.”

Wharton, of the CDC, told the expert panel that similar data is used to roll out flu vaccines. “Every year, we approve new influenza vaccines with new strains without clinical data,” she said. The CDC also warned that delaying a variant-specific booster would result in a human toll. Agency scientists presented COVID transmission models that estimated 37,000 additional hospitalizations and 9,000 more deaths from the virus in the US, if the bivalent boosters weren’t made available for another two months.

Despite widespread reservations about the lack of updated clinical data, the independent advisory panel voted 13-1 to recommend the shots. Sarah Long, a pediatric infectious disease expert at Drexel University College of Medicine, said she was ultimately swayed by the fact that the BA.1 and BA.4/BA.5 vaccines both targeted relatively similar strains of Omicron. “It’s the same scaffolding, the same roof,” she explained. “We’re just putting in new dormers and windows.”

What does this mean for boosters going forward?

At last week’s hearing, CDC and FDA officials said that they hoped the updated vaccine would simplify the confusing process for COVID boosters approval and eligibility. Going forward, it doesn’t matter how many shots a person has received in the past, or what risk group they’re in: Almost all boosters will be bivalent, and almost anyone who is two months out from their most recent vaccine will be eligible.

The exceptions are children between ages 6 months and 5 years, who aren’t yet eligible for any booster, and those ages 5 to 11. Last week Pfizer told CDC advisors that it would apply for FDA authorization of the bivalent booster for that second age group in early October.

[Related: How do vaccines affect periods? A big COVID survey lays out some clues.]

According to a presentation by the CDC’s internal COVID vaccine working group, one effective strategy moving forward may be to follow the flu vaccine’s example and issue annual updates to the boosters.

“I think there’s a lot to be learned from the flu,” says Shi. “But of course, we have to be cautious. This is not the flu.” Countries will need to monitor for new mutations every week or every month, and track real-world outcomes of COVID patients, he notes, to understand how future variants interact with the bivalent vaccine.

Persad adds two other elements he’d like to see from future booster updates. “People keep insisting that you had to do this based on mouse data because the human trial would have taken too long. I really challenge whether it has to take so long,” he says. He wonders if either federal incentives for human trials, or accelerated screening for vaccines with safety data could be possible. He also stresses that the CDC and FDA should “really understand what the obstacles are among people who got their initial vaccine, but haven’t gotten a booster.” Only half of eligible Americans are boosted, and getting the new shot to individuals who need it will be an ongoing challenge.