The tiny, venomous mammal outlived the dinosaurs, but might go extinct due to extreme clumsiness. 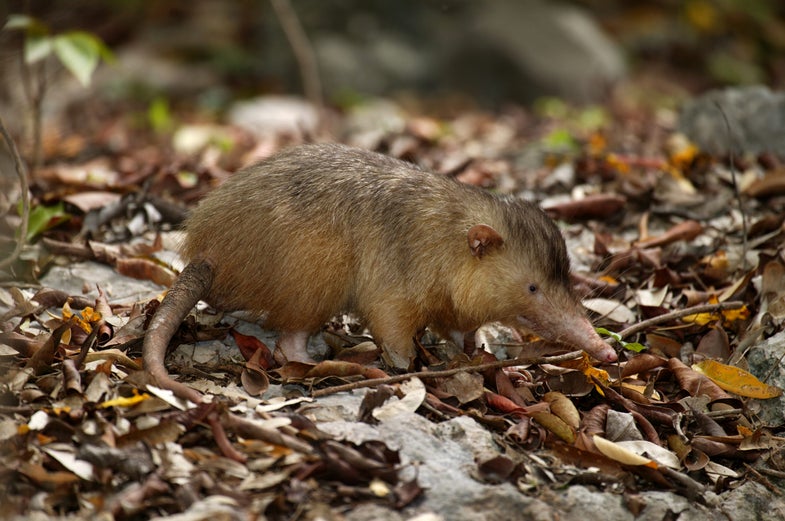 If any animal were going to outlive the dinosaurs, you probably wouldn’t guess it’d be this lil shrew-lookin’ dude. Look at it, with its little eyes and almost-creepily-bald snout. Crocodiles, deep-sea sharks—they look like they’ve survived millennia. But this guy? Nah.

But as it turns out, this little solenodon is part of one of the earliest branches of the mammalian family tree, departing from the rest about 74 million years ago. They are also one of the very few existing venomous mammals, and among a small group of animals that survived the human settlement of the Caribbean islands. Most others died off as their environment changed, but solenodons kept scurrying along in their maze of underground tunnels with their mini shovel paws.

But now, the Hispaniola solenodon is in danger of going extinct, so biologists are trying to preserve its genome for study before it disappears forever.

Taras K. Oleksyk, a molecular geneticist at the University of Puerto Rico at Mayagüez, just won the ICG12 GigaScience prize for work he and his colleagues did to provide a rough draft of the solenodon genome. The team published their work in an open access journal so anyone can use the data.

It’s not exactly easy to sequence the genome of a small, elusive population of creatures. For starters, you have to find them.

Solenodons are nocturnal, so during the day (when it would be easiest to spot them), they’re chillin’ below ground in their tunnels. They’re social animals and live in family units consisting of a parental pair and a small group of younguns. They come out at night to hunt insects, worms, snails, and sometimes even mice. Each female has two nipples that are located almost on her butt. That’s not really relevant, but it seems worth noting.

Until humans showed up, they lived a relaxing life in the moist forests of Hispaniola, never worrying about predators of any kind. And as a result, they never really learned how to run properly. The International Wildlife Encyclopedia notes that “they run on their toes with a stiff ungainly waddle, following an erratic almost zigzag course” and that “when a solenodon is alarmed and tries to put on speed it is as likely as not to trip over its own toes or even tumble head-over-heels.”

That technique is, as you can imagine, fairly ineffective when you’re trying to escape a mongoose or a dog. Ever since humans introduced those animals to the island of Hispaniola, solenodons have been struggling to survive. The IUCN now considers them endangered.

Oleksyk and his team asked two local guides to help them locate the little buggers. Nicolás Corona and Yimell Corona guided the scientists through the forest, looking for tracks, burrows, or droppings during the day and setting up “ambushes” at dawn. The fabled solenodon gait came in handy here, since the paper notes the researchers were able to simply chase down their targets and pick them up by their tails to avoid getting bitten. In less than 10 minutes, a veterinarian was able to draw a small amount of blood from each of the five animals they were able to catch, draw on their tails with a Sharpie, and release the solenodons back into the forest.

The problem with only being able to collect a few samples from poorly studied, wild animals is that it’s tough to get high-quality DNA. And without that, it’s challenging to put together a complete genome.

Luckily for these biologists, solenodons are very genetically homogeneous, meaning they have little genetic diversity. It’s a small population that’s lived in isolation for years, so the similarity between any two individual animals is going to be very high. And that means they could pool the samples from the five solenodons they caught into one uber-sample.

Once they had pieced together the genome, the researchers were able to start investigating some of the solenodon’s weird genetic anomalies. Its venom, for example, seems to not be closely related to any other kind of venom, including other mammalian toxins. This shouldn’t be all that surprising, given that their evolutionary branch split off 74 million years ago. Despite how shrew-like they look, solenodons aren’t all that related to shrews, so even though both have venom in their tiny, sharp teeth it makes sense that they would have developed different formulations.

Hopefully there will be many more revelations about these evolutionary survivors now that we’ve sequenced their genome. They are truly a bizarre branch of the mammalian tree, and we could learn more about how an animal from the Cretaceous period managed to stick around for this long. That is, as long as we don’t kill them off first.