We now know who ‘Baby Louie’ really was 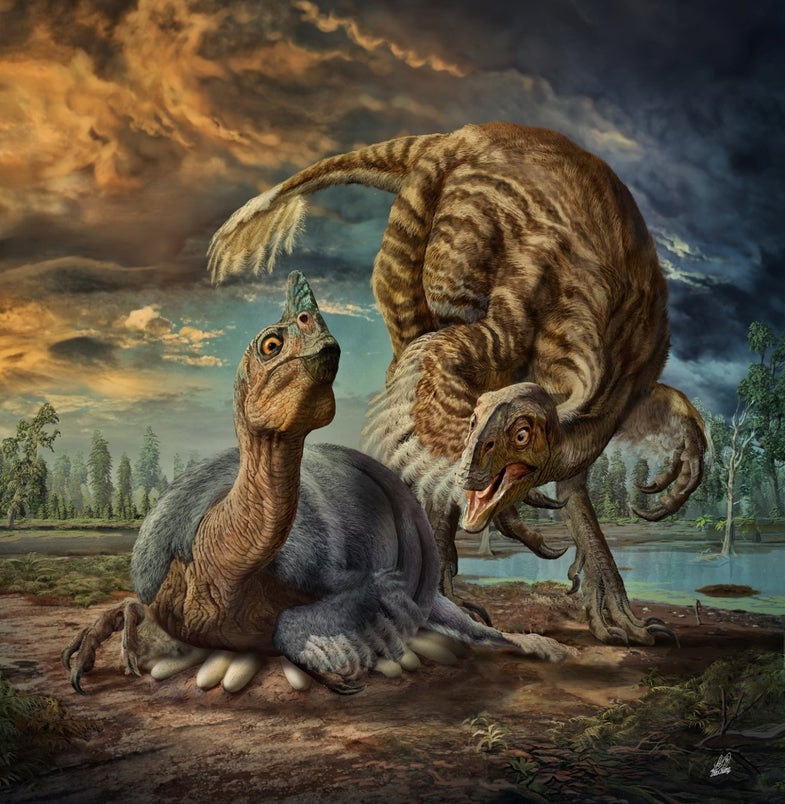 Big Bird is eight feet, two inches tall. That’s big. The ostrich, the largest living bird is bigger, topping out around nine feet tall. But neither fictional nor factual birds can hold a candle to a new species of bird-like dinosaur called Beibeilong sinensis, which was likely around 26 feet long and weighed about 3 tons when fully-grown.

The oviraptorosaur was formally named in a paper published in Nature Communications on Tuesday. But the species wasn’t identified based on a full-sized fossil. Instead, researchers singled out the new species based on an embryo found fossilized in a nest filled with gigantic eggs.

The fossil was found in the Henan province of China by a farmer in the early 1990’s and ended up in a private collection, but researchers were eventually invited to examine it. The embryo—revealed as the fossil was removed from its stone casing in 1993—was nicknamed ‘Baby Louie’ and sat on display in the United States for years before being repatriated to the Henan Geological Museum in China in 2013.

Wary of the fossil’s unconventional route from ground to lab bench, the study authors waited to publish their formal identification of ‘Baby Louie’ until after the fossils were sent back to China.

“The eggs and embryo gained worldwide fame when they were featured in a National Geographic article in 1996, but it was impossible to describe them in a scientific journal—and to name the new species—until the fossils were repatriated to China,” study author Philip Currie said in a statement.

“It’s too small to be a hatchling,” said Darla Zelenitsky, a study author and paleontologist who has worked on this fossil since the 1990s. “It was still an embryo when it died, and then somehow it was removed or extruded from the egg after death.”

Small as it is, the 15-inch-long dinosaur had distinct characteristics that matched up with fossils of the only other species of gigantic oviraptorosaur, found further North in China and Mongolia. Combined with the observation that the two-foot-long eggs matched the ridged texture and odd tubular shape—but not the size—of smaller oviraptorosaur nests, paleontologists were able to formally describe the new species Beibeilong sinensis, whose name roughly translates to ‘baby dragon from China’.

Current estimates put the dimensions of the other known species of gigantic oviraptorosaur at roughly 26 feet long and about 3 tons, and this dinosaur may have been the same size.

But for all its girth, this giant feathered dinosaur probably sat in its nine-foot-wide nest to incubate its eggs, just like many birds do today (in much smaller nests).

“The eggs were laid in a ring shape,” Zelenitsky says, leaving a large bare spot in the center for the bird to park its considerable carriage. “That’s where the animal might have sat, right in the middle,” she added.

While specimens of giant oviraptorosaurs are exceedingly rare in the fossil record, their eggs aren’t. Similarly giant eggs are found across China, Mongolia, Korea, and North America, leaving future investigations into these animals wide open for future discoveries.

“The eggs are telling us that these animals were probably a lot more common that we thought,” Zelenitsky says.