It's a no drone zone. 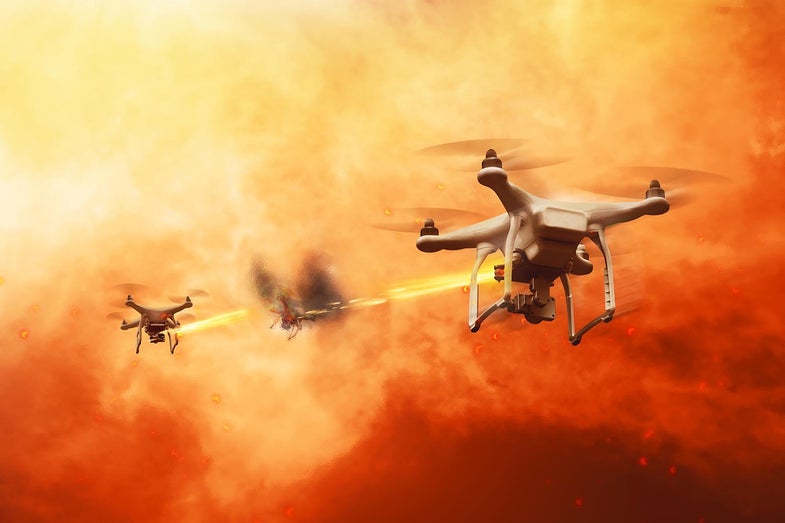 Forget Smokey the Bear. The Forest Service has a new message for Americans: Keep your drones out of their wildfires.

Even as the Forest Service uses drones both to help prevent fires, by starting prescribed burns and on occasion to help battle flames, drones are emerging as a new fire threat. People fly them into fires to get pictures that they wouldn’t otherwise be able to capture. The problem is, however, that capturing those images puts firefighters at even greater risk. And, if a drone hinders the firefighting process, that can cost valuable time.

When hobbyist drones dive into a wildfire, planes and helicopters tasked with dumping water and fire suppressing chemicals on the blazes can’t fly. This famously came to a head in 2015 when five drones flew over California’s North Fire as it barreled across a Los Angeles freeway. The helicopter that was supposed to drop water over the conflagration was grounded for more than twenty minutes. The mix of hazy, smokey conditions made the likelihood of an in-air collision too great and potentially devastating. And it’s not only dangerous, but also illegal. Last month a 54-year old Arizona man was arrested under suspicion of flying a drone over Arizona’s Goodwin fire. A helicopter was in the air at the time, and it had to be grounded for two hours. The fire took two weeks to be fully contained during which more than 28,000 acres, an area roughly the size of Florida’s Walt Disney World, burned. Wild land firefighters don’t need a tough job made any tougher.

Since the 1970s, the wildfire season has expanded by 78 days, according to the United States Department of Agriculture (USDA), which includes the US Forest Service. The reasons behind the longer season are complex. Past fire suppression efforts have paradoxically made wild lands more likely to burn bigger and hotter. The wildfire budget often gets spent on putting out wildfires rather than preventative care, like clearing out the underbrush that fuels fire. Add those elements to people encroaching into wilderness; and a changing climate and you have a potent mix of potential hazards.

Whatever the reasons, a longer fire season with hotter fires means the job isn’t getting any easier for wild-land firefighters who by some estimates have a death rate six times higher than those of structural (as in house and building) firefighters. At least two firefighters have already died this year battling blazes. Trenton Johnson, a 19-year old firefighter from Montana working as part of a privately contracted firefighting company, was killed while fighting the Florence Fire near Seeley Lake, Montana, and Brent Witham, a 29-year-old fire fighter from California, died while fighting the Lolo Peak fire in Western Montana.

To help keep fires contained and their firefighters safe, the government has designed a series of posters in a style that can only be described as throwback posters to remind us to keep drones out of fires, a space that they’re referring to as “no drone zones.” Here are some of the ones we liked the most.