How aerial firefighters battle blazes from the skies 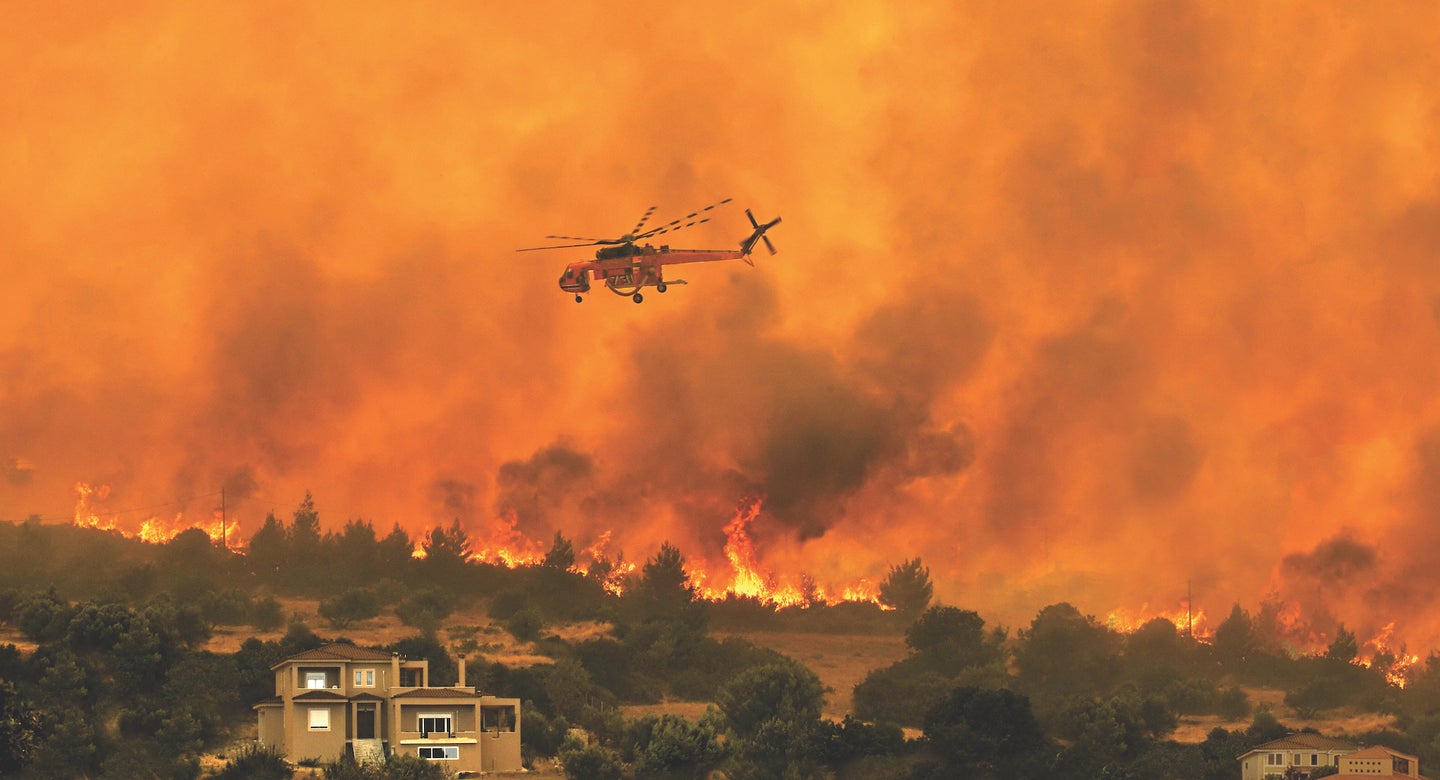 An Erickson helicopter in Greece in 2009. Erickson, Inc
SHARE

The most dramatic way to fight a fire is from the sky.

An air tanker may fly about 150 feet off the ground at 161 miles per hour and can paint up to a mile-long line of retardant on the ground. A big helicopter could dump as much as 2,000 gallons of water to try to save a house. And smokejumpers fling themselves from airplanes 3,000 feet above their landing area below to snuff out a small fire in a remote area before it gets bigger.

Right now, California is home to two historically enormous blazes: the SCU and LNU Lightning Complex fires. The state is using aircraft to combat the two huge conflagrations. “They keep swapping positions for the second- and third-largest wildfires in our state history, unfortunately,” Brice Bennett, a spokesperson for CalFire, told Popular Science earlier this week. All the fires in the state right now cover an area larger than 1.25 million acres. “We’re dealing with just an incredible situation,” he comments. As of today, aerial assets in California have dropped 3.35 million gallons of fire retardant and 4.69 million gallons of water, according to Bennett.

California, of course, uses aircraft—it has both its own fleet and can employ contractors—to mount full-court presses on fires, but the practice is certainly not limited to combating burns in the Golden State. Here’s how these aerial operations work, and what it’s like battling blazes from the air.

There’s an important, counterintuitive fact to know about those big planes full of retardant: “Air tankers don’t put out fires,” says Kevin Hopf, the chief pilot for an outfit called 10 Tanker. His company flies DC-10s that used to carry passengers; the seats and overhead bins and other equipment have all been removed. His aircraft has five external tanks that carry retardant and three big clamshell doors on the bottom, each about 22 feet long, which open to deploy the red stuff.

For the most part, tankers like the one Hopf flies drop a line of retardant not on the fire itself, but in a place that will help steer or contain the blaze. The “firefighting mantra,” Hopf says, is simple: “anchor, flank, and pinch.”

The first step is to begin the line of retardant at some type of anchoring area that can stop the fire, a starting point such as a bunch of rocks. Then comes containment. “You flank the fire, on both sides, and you keep running up the flanks until you get ahead of it, and then you start trying to pinch it off,” Hopf explains. Pilots will then begin bringing the two flanking lines towards each other.

That’s a standard firefighting tactic, although he notes that truly enormous fires—maybe 50 miles wide, 100 miles long—would be impossible to anchor, flank, and pinch. “There’s not enough air tankers in the world to do that,” he says. “Now you start going for structure protection.”

On those occasions, on a big fire when he’s tasked with guarding structures, “you hope to find out the next day that they’re all still standing,” he says. “We very seldom see our work.”

And it’s decidedly not about thrill-seeking or cultivating a cowboy image, says Brent Connor, the senior captain for Erickson Aero Tanker. Their fleet is mostly MD-87 aircraft that also used to be passenger-carrying airliners. “When I teach people how to do this,” he says, “I tell them that if your adrenaline is pumping, you’re probably doing something wrong.”

Deploy water from the sky

While the airplanes usually carry the red retardant, helicopters generally schlep water, which they dump on flames from above. Tanner McInnes flies a small, light helicopter—a Bell 407—for a Missoula, Montana company called Minuteman Aviation. If he’s dispatched to fly off towards a little fire in the forest—it might just be smoke spotted by a lookout, probably the result of a lightning strike—he’ll shuttle a fire manager in the front seat next to him, and two firefighters, part of a helitack crew, in the back.

After assessing the fire from the sky, he might land the helicopter nearby and drop off the firefighters. The manager stays on board. If the authorities want him to drop water on the fire, the manager will install a bucket that hangs from the bottom of the chopper, and McInnes will grab what he can from a pond or river. (He says he’s never picked up any fish.) And since he needs to be able to stick his neck out and look down while he’s flying with that bucket, the manager can remove the chopper’s side door and stash it inside. “It’s actually nice, because it’s hot generally when we’re flying,” he says.

He tends to carry about 180 gallons of water in a bucket. Still, he emphases that “aviation does not put out fires—it’s the firefighters on the ground.” Take a small fire, he says, by way of example, with one burning tree: he’ll douse it with water, only to find that the flames have sprung back up again. “It’s amazing how much heat there is: A lot of times, if lightning strikes, they hit the tree, and they smolder for days before they actually show themselves,” he says. To take care of the problem for real, the firefighters on the ground might cut down the tree, and break it up, and stir up the soil to make sure everything is out, and dig lines around it.

While McInnes’ chopper carries its water in a bucket, that’s not the only way to do it. Ken Chapman flies a strange-looking helicopter for Erickson Incorporated called an S-64 Aircrane, and to get the wet stuff on board, all he has to do is submerge a snorkel about 18 inches deep in a body of water. It sucks the water up through a hose, needing just about 40 seconds to fill up with around 2,000 gallons of fresh water.

When it’s time to drop the payload on a fire, Chapman’s goal is to deploy it from about 150 feet off the ground, flying at some 69 miles per hour. With that setup, as the water falls through the sky, it “loses its forward momentum, and rains down on the fire,” Chapman says. Dropping the water that way means that ideally there’s no “shadowing,” which is when the water smacks into just one side of the target. “If you come in low and fast, you’re going to paint on one side of the trees and stuff, and the other side is going to be dry,” he explains.

The most intense fire he’s ever flown was the 2018 Carr Fire in Redding, California. “The thing that was amazing to me was how fast it went, and it was burning in the city,” he recalls. “This thing was coming into subdivisions. It reached a point, where they just said, ‘Go save a house.’ And you’d get a load of water and you’d come in and dump, trying to protect a house, and by the time you went and got water and came back, the house was gone.”

Jump out of the plane

Not all aircraft drop retardant or water. Some deploy people known as smokejumpers. Pat McGunagle is a jumper based in West Yellowstone, Montana. He’s made more than 60 jumps, although the vast majority of those have been for practice—he’s a relative newcomer to the field. The jump height out of the Dornier 228 airplane he and the others fling themselves out of is 3,000 feet above the ground, although smokejumpers who use an older, round-style chute do it from 1,500 feet.

Jumpers aim to arrive quickly at a blaze in the woods—most of which get sparked by lightning—and deal with it before it spreads. They deploy in groups of two. McGunagle will jump out of the plane carrying supplies that include drinking water, food like beef jerky or peanut butter, solution for his contact lenses, and a pound of coffee. The coffee, of course, is for starting the day. “The youngest guy on the load has to make the coffee every morning,” he says.

Other gear, like chainsaws or Pulaski tools, comes down as cargo from the same plane from about 150 feet above the terrain.

To put the fire out, he says, you have to “dig and stir.” He’ll even use his arm to make sure it’s truly out. That works like this: “Stick your hand down in there, all the way to your armpit, down this scary, black, smoking hole, and find that little bit of fire down there,” he says, “and scoop it out and stir it.” That’s the way to make sure it’s truly extinguished—with work not from the sky, but on the dirty ground.