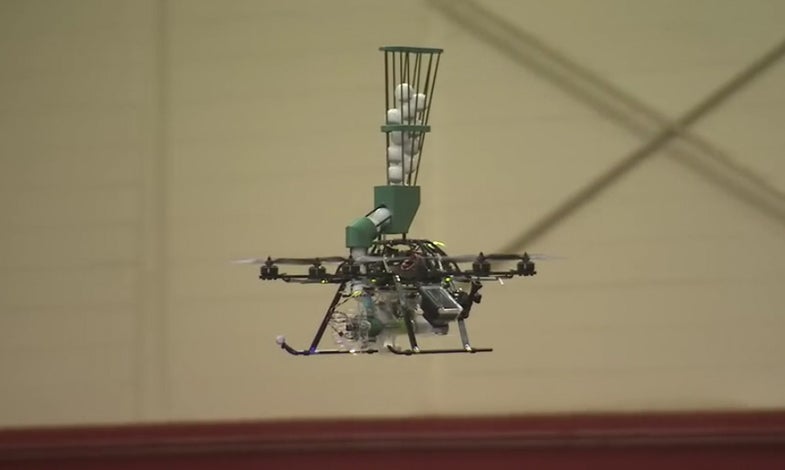 Not all fires set by robots are bad. Sometimes an avalanche, even one triggered by a drone’s bomb, is a good thing. We live in a weird world, and part of maintaining that weird world sometimes means asking robots to do horrible things. Meet the University of Nebraska-Lincoln’s “Unmanned Aerial System for Fire Fighting“, the proactive fire-starting drone, and the bomb-dropping, avalanche-starting Prospect, from Mountain Drones.

The Unmanned Aerial System for Fire Fighting, which could really use a catchier name, is made to start helpful fires. The Forest Service, more than anyone else in the business of preserving forests, enumerates the many benefits of prescribed burns:

Dirac Twidwell, one of the team members behind the fighting-fire-with-fire drone, published a study early this month saying not only are the risks of a prescribed fire less than that of wildfire, but also that drones are the better way to administer these fires.

From the University of Nebraska-Lincoln, here’s how the fire-starting drones work:

So far, the firefighting-by-firestarting drones have only been tested indoors. The project is still in the early stages, but in the future swarms of drones could start and monitor prescribed burns, a robotic alternative to the risky human work of burning things deliberately.

Mountain Drones didn’t start with a mission to drop bombs from robots. The company claims it has FAA exemption to fly drones for other, non-explosive purposes, though the FAA’s own drone exemption search doesn’t include any authorizations for “Mountain Drones” and the company has not yet responded to email request for information.

Following the death of a friend in an avalanche, the team behind Mountain Drones looked to see if there was a way they could use their unmanned flying machines mitigate that risk. The answer: drones with dynamite. Mountain Drones’ Prospect model weighs 35 pounds, and so far only carries dummy explosives.

To fly in rough weather, Prospect has LED lights and a proprietary waterproof body. An armed drone may seem like a particularly militaristic solution to accumulated snow, but most solutions are. The Colorado Department of Transportation lists a range of explosive methods for dislodging dangerous accumulation:

Into this mix, an armed drone becomes just another tool, rather than a unique and scary risk.

Seeing these drones together, I couldn’t help but be reminded of the mutants Avalanche and Pyro from X-Men. Spurned by society, rejected by the heroic X-Men, and kind of jerks in their own right, the fictional Avalanche and Pyro turn their talents to a life of villainy, committing terrorism for the Brotherhood of Evil Mutants. Fires and seismic shocks can certainly be turned to wicked purposes, but they don’t necessarily have to be. As the FAA works to regulate drones, finding a way to incorporate helpful but risky efforts like the Unmanned Aerial System for Fire Fighting and Mountain Drone’s Prospect should be, if not a priority, at least a consideration.