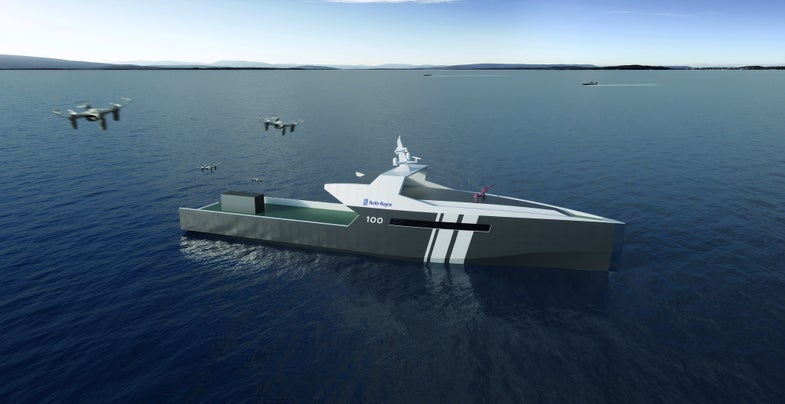 Robotic ships are the stuff of science fiction and the United States Navy. In 2016, the Navy christened Sea Hunter, a 132-foot-long, fully autonomous vessel designed to patrol the ocean and look for submarines lurking beneath the surface. Sea Hunter is the culmination of a six-year-long project by DARPA and the Office of Naval Research to make a ship that can do a job all on its own, reporting back to human controllers without any onboard crew. If Sea Hunter was the proof of concept, Rolls-Royce wants to transform unmanned ships from a single novelty into a major part of navies around the world.

Rolls-Royce (not the car company) released a concept for an autonomous naval vessel last week, one that would be powered by Rolls-Royce engines and controlled by its own systems. The concept vessel has a range of 3500 nautical miles, a top speed over 28 mph, a displacement of 770 tons, and will be able to operate for at least 100 days at a time. It is envisioned as a platform in the truest sense: a body for naval missions, that can incorporate and perform any number of missions, depending on the special equipment installed.

“If navies want to seriously start to move into this space, this is what that ship would look like,” says Edward Wright, a senior engineer at Rolls-Royce, “We’re already seeing smaller unmanned surface vehicles performing missions like patrol and minehunting, but what the larger platform gets you is creased range and persistence.”

There is already a thriving ecosystem of smaller, unmanned and remotely controlled aquatic vessels. Most of these operate in close contact with ships, some even being tethered directly to the support vessel. Others operate on their own, but with short ranges limiting them to patrolling dockyards instead of seaways. While these those robotic submarines and boats are useful, their reliance on such motherships limits what autonomy can do.

The windowless sides give away that the robot vessel has no human crew on board.

One of the biggest promises of autonomy for navy ships is the ability to do the same mission as an existing vessel, but with a greatly reduced crew or, for a modest enough ship, without needing a crew entirely. This is part of the philosophy behind the Navy’s new Zumwalt destroyer, a highly automated ship designed to operate at full capacity with half as many sailors on board as other destroyers. And it’s a big part of the logic behind Sea Hunter, which can patrol the sea without a single sailor on board. Without the need to transport or support people, everything on the vessel can serve the mission, and any space that would have gone to crew quarters, toilets, and creature comforts is suddenly superfluous.

This has big implications for commercial shipping, as well as military ships. Last summer, Rolls-Royce released an ambitious vision of the future, a video showing how a crew at a remote headquarters on land could control an entirely uncrewed cargo ship, and then inspect it with a drone. Shipping is one end goal, with naval missions a likelier waypoint on that journey. Like shipping, navies have labor costs for crew, and unlike commercial shipping, naval vessels have missions that sometimes require them to seek out the danger.

Which is perhaps why a long-patrol robotic minehunting might make both tactical and economic sense. Sea mines remain one of the deadliest, if not the deadliest, threat to boats and ships outside of a shooting war. After World War II, the Navy sent ships with skeleton crews and mattress-lined cabins to detonate old sea mines, a task that became known as “guinea pig duty.” Improvements in minesweeping technology and technique since then no longer necessitate guinea pig duty, and putting the tools to find and disable mines on a robot puts humans at further distance from the danger.

“The move to unmanned is about reducing cost and increasing safety,” says Wright. And the systems that make autonomous concepts possible are ones that can also improve the safety of crewed ships.

Sensors from radar to cameras to LIDAR (a radar-like system that uses lasers instead, and is seen on self-driving cars), as well as existing navigation systems all feed into a “ship intelligence” system that turns it into a 3D world around the ship, identifying objects and plotting a course for the ship. Those features can work on crewed vessels, providing more and clearer information to the people steering the ship on the bridge, and possibly directing a ship out of harm’s way.

And this isn’t just conceptual. Earlier this summer, Rolls-Royce demonstrating such seafaring remote control on a modified tugboat. Assuming there’s sufficient interest in the world’s navies, Wright expects to see an autonomous ship like the Rolls-Royce concept within a decade.