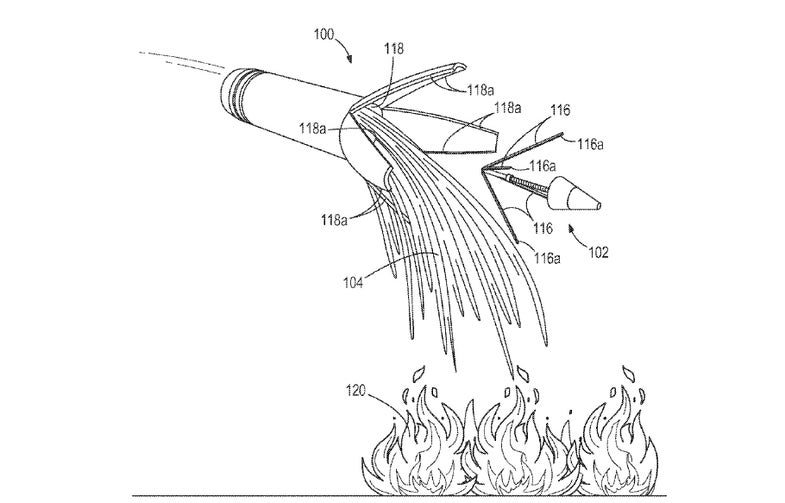 Artillery is a tool of destruction. Howitzers, in particularly, are a kind of weapon great for lobbing explosions up through the air and over objects to crash down on foes. So why is defense and aviation giant Boeing looking to howitzers as a way to fight forest fires?

Because artillery, as it turns out, doesn’t have to just deliver explosives. The guns themselves don’t care too much about what the shell fired does when it lands; the guns are just there to put the payload where it goes. A new patent from Boeing for a “Fire-retarding artillery shell” wants to swap out the death-dealing explosives in howitzer shells and replace them with life-saving fire retardant.

A patent summary describes how the artillery works:

So why artillery? Specifically: what advantage does a howitzer have that a helicopter or a converted bomber doesn’t, when fighting a fire? Aircraft are excellent at delivering a single large load to a target (in war, an enemy position; in forest firefighting, a section of the fire), but once they’ve dropped their payload, they have to go back and refill before they can attack again. In battle, this gives enemies time to regroup. In forest firefighting, it gives the fire time to grow. Boeing’s patent was filed in 2014 and made public last month, according to DefenseOne.

Compare with the M198 Howitzer, which the United States phased out of active use in the last decade. There are hundreds still made, so it’s not a bad guess for the kind of hand-me-down weapon the Forest Service could get. The M198 can be carried into position by truck or military helicopter, set up within six minutes, and then fire at least two shells every minute.

Here’s some rough math. The M107 projectile fired by M198 howitzers has about 14 pounds of explosive payload. (It’s likely that a specially made fire-fighting projectile would have more volume for fire retardant). The fire retardants used by the Forest Service are mostly water, with special powders or chemicals mixed in. A gallon of fire retardant weighs about nine pounds, so an existing shell could fit, roughly, 1.5 gallons of fire retardant. At two rounds per minute, it would take a single howitzer 36 hours to deliver the same 6,469 gallon payload as the bomber. That’s not great at all!

Fortunately for Boeing’s patent, and the field of artillery writ large, howitzers are best paired with friends. A howitzer battery is typically six guns, so instead of the 36 hours it would take one howitzer to deliver 6,469 gallons, or the 7.6 hours it would take one plane, six howitzers could fire enough to make a firebreak in just under six hours. With 12 guns, that firebreak is set up in just three hours. Artillery scales really well.

Wildfires burned over 2.6 million acres in the United States in mid-July. If Boeing can turn its patent into concept and then a useful tool, it may just be the tool needed to fight forest fires with firepower (or, in this case anti-firepower).