Floating Solar Panels May Be Coming To A Reservoir Near You

“Flotovoltaics” could be cheaper and more efficient than land-based panels 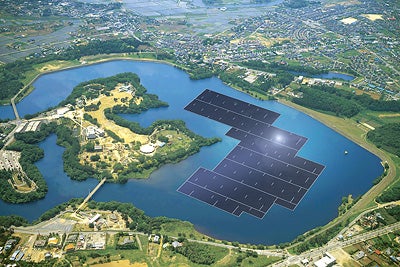 To improve on solar energy, new power plants are taking to the water. The idea is still pretty new, but rafts of floating solar panels are up and running in the United States and Australia, with more planned, reports The New York Times.

Floating solar panels are more efficient than land-based arrays (thanks to the fact that they have water on hand to cool them down). “Floatovoltaics” are also appealing because it’s cheaper to float panels over water than to rent or buy land. They can be constructed more quickly than land-based installations, and more easily tucked out of sight. Floating arrays also tamp down on algae blooms and keep water from evaporating.

The world’s largest installation will feature more than 50,000 panels on the Yamakura Dam Reservoir in Japan’s Chiba Prefecture. When construction—which started January 21—finishes in two years, the panels will generate enough electricity to power nearly 5,000 homes.

[Via The New York Times]