Thought to be extinct for more than 50 years, this anole is one of the rarest and most endangered species on the planet. It has a weird nose. 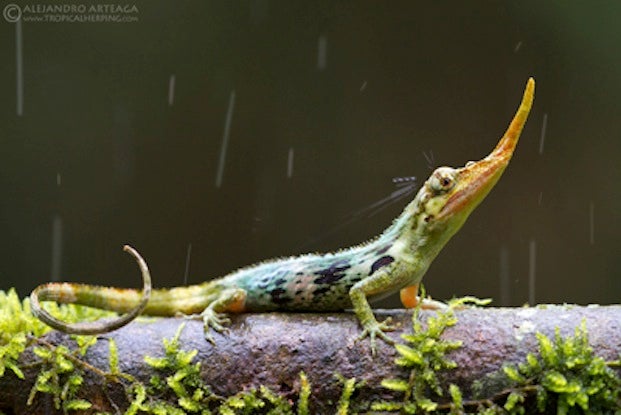 The Pinocchio lizard, horned anole, or Pinocchio anole (Anolis proboscis) was discovered in Ecuador in 1953. Sometime in the 1960s, we lost track of it, and for decades it was assumed to have gone extinct. But it was seen again in 2005, and a few times since then, and now, reptile- and amphibian-focused ecotourism group Tropical Herping has managed to snag one and observe it for a whole day. Which means we get to look at pictures of one of the weirdest lizards on the planet!

The Pinocchio lizard is native, we think, to a tiny area around one small road near the Ecuadorian town of Mindo. It’s become an odd sort of white whale for researchers; the (excellent) anole research blog Anole Annals routinely features stories about the creature. Mindo is a popular ecotourism venue, in which tourists can see a relatively undisturbed rainforest, go zip-lining, and tromp about in search of cool weird animals and plants (it’s also home to about 170 species of orchid). In other words, Mindo is home to a weird-looking, super rare lizard, and also full of a lot of people who would be very interested to see such a lizard.

Tropical Herping stumbled upon a male Pinocchio lizard—only the males have the exaggerated snout that gives the species its name—and managed to snag one for overnight observation. (It was returned to its home territory the next day.) The group was trying to find this species because it’s the only one they had left to photograph for their new book, The Amphibians and Reptiles of Mindo. But they’ve also gotten some new information about the lizard; for example, we now know that the snout is flexible, and that the lizard is found in both deep cloud forest and in the border areas near towns. The time spent with the lizard confirms that it is weird and cool.