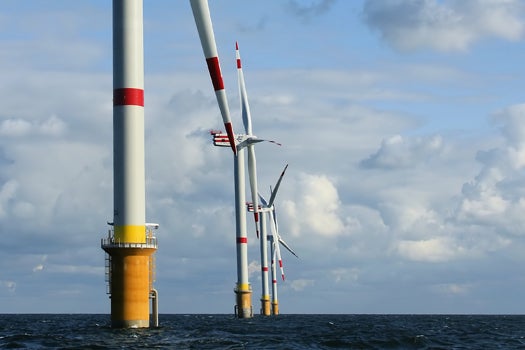 Wind power is pretty great: One doesn’t need to do much but build turbines and capture the energy from a passing breeze. But, like what happened to the Ancient Mariner, still air means trouble. Intermittent energy is not useful for a grid that requires a continuous supply.

To get over this problem, engineers have devised a number of ways to store energy generated when it’s windy for disbursement during the times when it is not. Ideas include giant flywheels, carbon-neutral natural gas and giant batteries made from gravel and argon gas. Now Alexander Slocum, Brian Hodder and their colleagues at MIT have demonstrated a new way to store that energy — giant hollow concrete balls. They published their results this month in Proceedings of the IEEE. 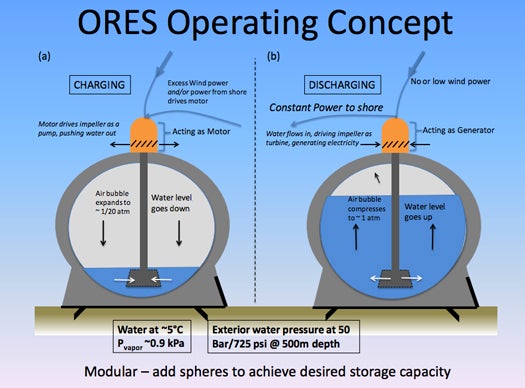 As the wind turbines turn, they pump water out of the hollow spheres. Once the wind dies down, the water rushes back into to sphere, spinning a turbine which generates power to send to the electrical grid.

The concept is pretty simple: As floating offshore wind turbines churn, they send most of the generated power to the grid. Some of the power, though, goes to pumping seawater out from 25-meter-wide hollow spheres which sit on the seafloor. As soon as the wind dies down, the pumps turn off, and the seawater rushes back into the spheres through a turbine; the water turns the turbine, which then generates electricity. The researchers calculated that one such sphere, moored in 400-meter-deep water, could store up to six megawatt-hours of power. A few hundred of those would be enough to offset an hour of energy from a typical nuclear power plant.

According to the researchers, initial estimates indicate that one sphere would cost $12 million to build and deploy, which is three or four times the cost of a typical onshore wind turbine. But worrying about the cost is still a bit premature, as only a 30-inch-diameter proof-of-concept has thus far been built. The MIT team has plans to build a sphere with a diameter of three meters, but further funding will be required to build a 10-meter sphere intended for undersea testing. Still, it could be worth the investment — the researchers estimate that floating offshore wind farms with energy storage capacity could satisfy more than 20 percent of our energy needs.