Concept Skyscraper Generates Its Own Energy, Looks Like A Toilet Brush

The, erm, splashy future of skyscrapers 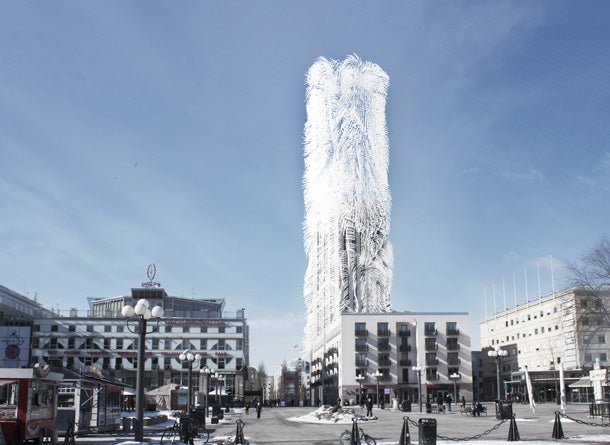 In the future, all buildings will resemble massive toilet brushes. Perhaps not, but that’s the net-zero energy future of skyscrapers envisioned by Belatchew Arkitekter in an idea called STRAWSCRAPER which, in spite of the toilet brush comparison, is actually pretty cool. The general idea here is to give tall buildings a skin of piezoelectric fibers that harvest energy to power the building from the wind.

Belatchew’s model for this concept is Södermalm’s South Tower in Stockholm, Sweden, which was completed in 1997 but at only 26 stories rather than the originally planned 40 stories (the architect who designed the building apparently left the project after losing control of the design). Belatchew’s STRAWSCRAPER would return the building to its original proportions, extending it 14 stories skyward by way of adding huge vertical rods covered in piezoelectric filaments. The other 26 stories would also be sheathed in piezoelectric ribs that would ripple in the breeze, thus creating electricity. 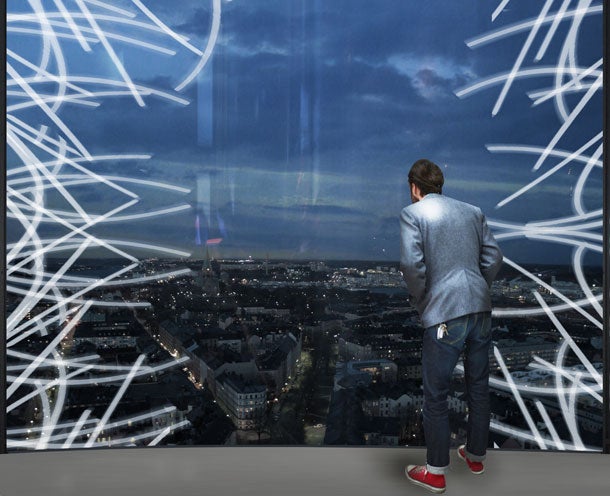 South Tower, From Inside

Piezoelectricity is, simply put, an electric charge that builds up as the result of mechanical stress. Think of it as a small jolt of electricity generated by the flexing of a material. With piezoelectric fibers, even a light breeze would generate power. That in turn could keep the building running without pulling energy from the grid.

And, being the brainchild of an architecture firm, there’s an aesthetic aspect to STRAWSCRAPER as well. Covered in these functional fibers, buildings–once static monoliths–become undulating, rippling, living things in the urban landscape. Like trees. Or cleaning implements.