We’ve Finally Figured Out What Makes LED Bulbs So Inefficient

Now maybe LED lighting will take off in more than just traffic lights and gadgets. 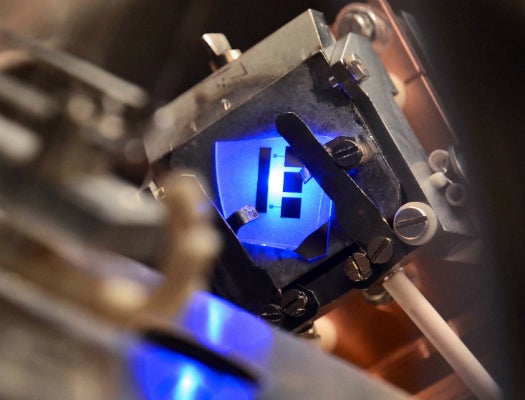 LEDs should be lighting the way to a greener future: They use 75 percent less energy and last 25 times longer than incandescent light bulbs, and they do so at a cooler temperature. But right now, we mostly use LEDs in electronics, because they have a bit of a drooping problem: at higher currents, the amount of light they produce takes a nose-dive.

The efficiency droop has baffled scientists for years, but researchers at the University of California, Santa Barbara and France’s École Polytechnique say they’ve finally solved the mystery.

Their work, published in a forthcoming issue of the Physical Review Letters, identifies the source of the droop as a process called Auger recombination, a non-radiative process that produces heat. Previous research at UCSB theorized that Auger recombination might be the culprit, but this is the first study to measure the effect conclusively.

LED-based lights contain a microchip with a positive-type and a negative-type semiconductor made of gallium nitride. Between the two, in a quantum well, the negative electrons from one semiconductor and the electron holes from the other combine, producing a photon of light. When you apply more electricity, it produces more photons–to a point. 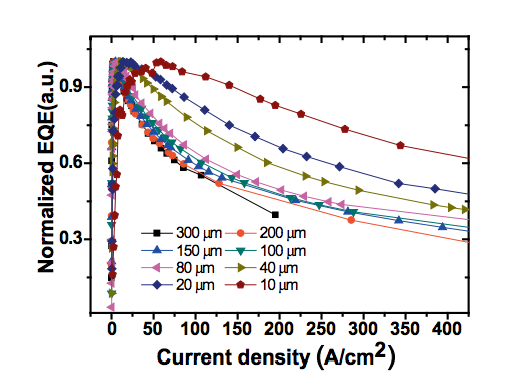 As the current increases, the efficiency of this blue LED starts to droop.

In low power situations, like in your cell phone, the process works great. But when you raise the current up to the level it takes to light a room, nitride-based LEDs stop producing photons at the same rate. According to the research from UCSB’s Center for Energy Efficient Materials, it’s because the electrons collide with each other and lose their energy through heat instead of light.

If we could make LEDs that circumvent that issue, they could replace compact fluorescent lights as the energy-efficient bulb of the future. Theoretically, LEDs should produce about 300 lumens per watt, making them three times more efficient than CFLs, as well as easier to dispose of since they don’t contain mercury. Widely adopting LED lighting could save the country $265 billion and reduce our electricity demand by one third in the next 20 years, according to a 2010 estimate from the U.S. Department of Energy.

But it does cost more upfront, so until LED technology can live up to their theoretical efficiency at higher currents, it’s a tough sell. While the U.S. is already phasing out energy-sucking incandescent light bulbs, LEDs have yet to take over the commercial and residential lighting market.

So far, we don’t have a solution to the droop, but now that they’ve identified the source of the problem, the researchers hope to design LEDs that will minimize the effect and produce more light, making the technology a more attractive choice for home and office lighting.