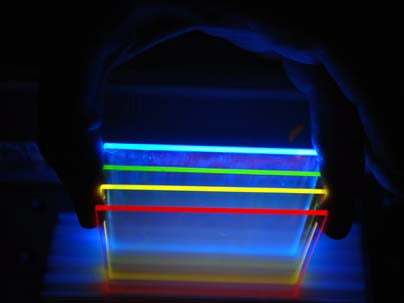 When I was eight years old, my uncle told me that I’d get a solar-powered car for my sixteenth birthday – and that it would be affordable. When I turned 16 in 2002, though, solar power was still inefficient and expensive, and I landed a bike instead. It’s taken impossibly high fuel costs, global warming, and some serious engineering developments, but six years later, solar power is finally becoming a viable alternative to oil.

MIT engineers have recently helped up the feasibility of widespread solar power by developing a new “solar concentrator.” The concentrator, which is a flat glass panel spread across a large area, gathers light at the edges of its surface. Expensive solar cells only need to sit on these borders – a difference that lowers costs and increases efficiency by 10 to 15 percent.

Scientists rerouted light to the panel’s edges by painting the surface with two or more organic dyes. By joining forces, these dyes absorb light from different wavelengths, thus harnessing as much power as possible. The panels can even be placed on existing solar-power systems – which could increase each cell’s power-capturing ability by 50 percent. Meaning maybe that car’s not such a pipe dream after all.