Chimps Can Catch Yawns Too

And the sensitivity to contagious yawns develops as they mature, as it does in humans. 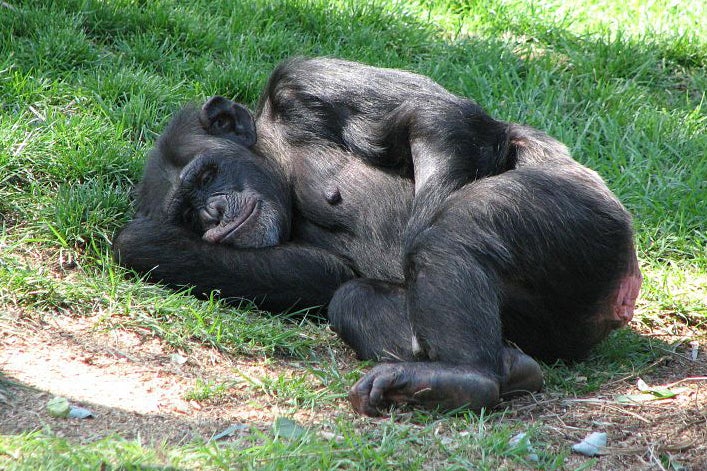 I love the idea of contagious yawning. Who’s a sleepy baby? Everyone’s a sleepy baby! Every uncontrolled, open-mouthed breath I take can be spread to all around me, forcing them to also expose the back of their throats in a mildly undignified manner, regardless of their level of sleepiness. The contagious plague of yawning can even leap across species from us to our close relative, the chimpanzee, according to research from Lund University in Sweden.

Cross-species yawning had previously only been observed in dog-human interactions, but in a study of 33 orphaned chimpanzees in Sierra Leone, the yawns of the chimps’ human surrogate mother and an unfamiliar human both prompted subsequent yawning in the animals. Forty-eight percent of juvenile chimpanzees, between 5 and 8 years old, yawned in response to a human researcher’s yawn. There was no contagious effect found for behaviors like nose-wiping or gaping the mouth open without the audible breathing that goes along with a yawn.

But contagious yawning appears to be a trait that develops as we mature. Infant chimps caught exactly zero yawns—a phenomenon that has also been observed in human and canine infants. One possible explanation is that catching a yawn is an exercise in empathy, and infants have not yet developed the ability to see the world from someone else’s (sleepy) perspective. However, there was no difference between how often the chimps caught yawns from the human model they knew versus from an unfamiliar human, and the relationship between yawning and empathy has yet to be firmly settled.

Skip to about 00:45 to start seeing the adorable chimp-human yawn action, plus bonus hair-stroking action:

The study (free!) is published in PLOS ONE.