Crazy ants pose a threat to native wildlife on the Gulf Coast—but a recently discovered fungus keeps their populations in check. 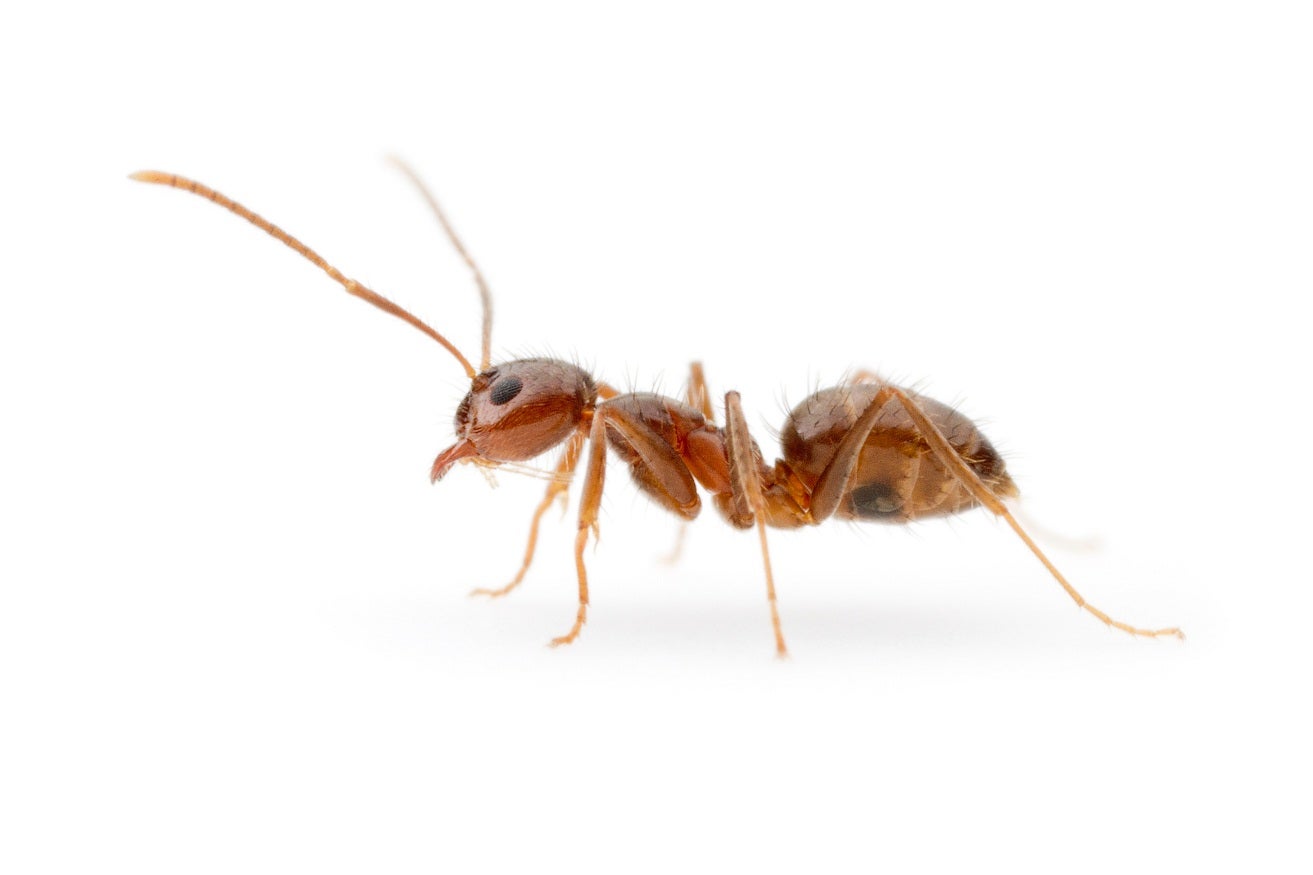 Tawny crazy ants spread quickly in the southern US, but a fungus can kill them off just as fast. Alex Wild/University of Texas at Austin
SHARE

Tawny crazy ants, a voracious species native to the Caribbean coast of South America and introduced to the southern US, might not be the threat to North American ecosystems that biologists had once feared. Although the insects still outcompete or devour local animals, a recently discovered species of fungal parasite stops them in their tracks.

When fungal spores get inside an ant, the spores chow down on the animal’s winter fat supply, slowly starving the insect from within. And in a recent field trial on crazy ant colonies, a team of entomologists at the University of Texas Austin’s Brackenridge Field Laboratory was able to eliminate a local population in a matter of years by exposing the ants to the fungus.

Crazy ants were first spotted in southern Texas in the 1930s, and by 2012, were established across most of the Gulf Coast. They’re named for their jerky gait—crazy ants are tiny, and rather than walk in single-file lines, they fan out across the ground, wobbling in every direction.

The new findings are “a big relief,” said invasive species researcher Edward LeBrun, the new study’s lead author, in a recent press release. “It means these populations appear to have a lifespan.”

Wildlife biologists across the southern US had watched the expansion of crazy ants with growing concern, because the ants damaged both infrastructure and ecosystems. Other recent findings suggested that the ants could show up and thrive in the Midwest in coming years.

The ants have a particular fondness for wire coatings, and are known for shorting out electronics. “They cover everything,” said Melissa Jones, a wildlife biologist at Estero Llano Grande State Park in Texas, in a recent video. “They’re crawling on everything that moves, walks, crawls, breathes.” When a colony shows up, it drives out other insect species, including existing ants, demolishing an area’s food webs.

A behavioral quirk partly explains their success. In South America, the ants separate into distinct colonies that fight over territory and food. In the US, however, there aren’t such clear boundaries. An ant from one colony can take up residence in another, and these “supercolony” populations can spread across a landscape.

Members of the Austin team first spotted the infectious fungus in the insects gathered in Central Florida in 2013. Their bodies were swollen to the point of bursting, because fungal spores were growing inside fat cells.

No one knows where the disease came from—it’s part of a family of organisms that was only identified as fungi within the last 10 years. These parasites are so specialized that they have lost key features, like mitochondria, which would allow them to survive outside a host. So far, this specific parasite has only been seen in crazy ants, and the fungus doesn’t seem to infect other ants or animals.

The Austin-based entomologists began looking for the infection near home, and found it . When they began tracking diseased ants, they saw a fast decline: Infected colonies shrank, and often died off entirely. It turns out that the crazy ant’s strength is also its vulnerability. Supercolonies are extremely susceptible to new pathogens, since ants from across a wide area are all rubbing thoraxes with one another.

Then, in 2016, rangers at the Estero Llano Grande State Park, at the far southern tip of the state, reported something concerning. Scorpions, insects, and even snakes were disappearing in the park. Staff quickly homed in on crazy ants as the culprit. “We’ve seen these ants attacking birds, particularly baby birds and small mammals, as well as rabbits,” Ben Hutchins, a biologist with Texas Parks and Wildlife, told the TV station KRGV in 2017.

The UT Austin ant hunters hadn’t yet planned to run experiments with the fungus. But when pesticides didn’t work at the park—crazy ants aren’t interested in typical ant bait—the researchers decided to give the fungus a shot. They released a few infected ants, along with hotdogs as a kind of housewarming present to bring the populations together. Large colonies quickly embraced the fungus-afflicted ants. A year later, all of the park’s crazy ants were infected. By 2022, the ants were gone entirely, as the study authors reported in the journal Proceedings of the National Academy of Sciences.

The entomologists plan to release more of the fungus around Texas this year. But that probably won’t be the end of the story.

“What we have learned from decades of work with fire ants is that no single organism will be a silver bullet,” Robert Plowes, another member of the team, said in 2015, after the discovery of the fungus. “Long-term control of invasive ant populations will depend on a cocktail of host-specific pathogens and parasites.”

It is unlikely Texas will completely get rid of the crazy ant. But the fungus might be a tool to help other members of the Gulf Coast ecosystem survive alongside smaller numbers of their new neighbors.