A unique population of endangered blue whales is at risk of vessel strikes in the Indian Ocean. 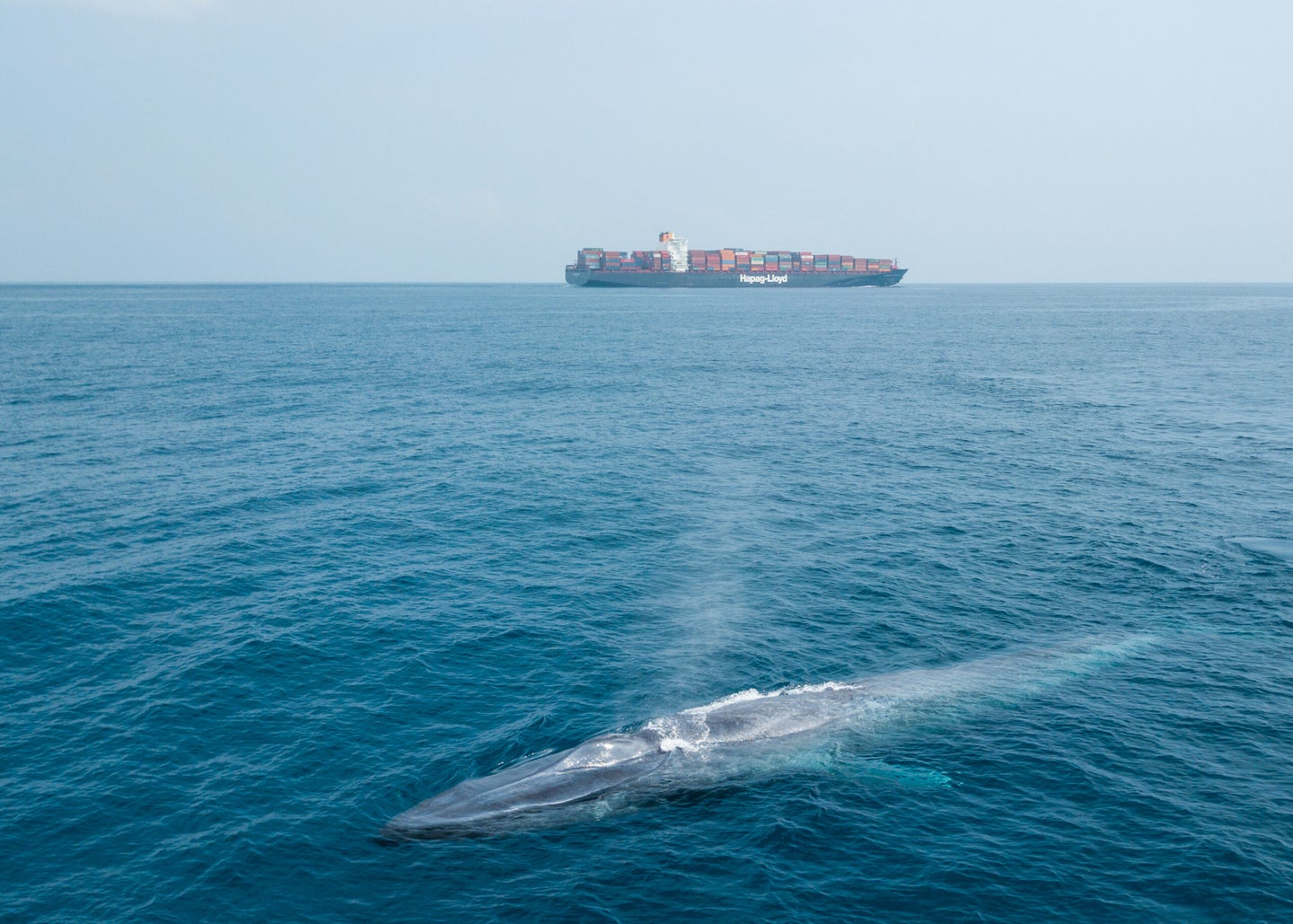 Environmental advocates hope that this move could lead to permanent changes to the official shipping lane. IFAW/Christian Loader
SHARE

Weighing in up to 330,000 pounds and 110 feet long, the blue whale (Balaenoptera musculus) is bigger than even the largest dinosaurs, despite subsisting on a tiny organism called krill (in huge quantities). They’re the largest animal on Earth currently, and one of the largest animals to have ever lived on our planet in all of history. Still, the magnificent creatures have been on the endangered species list since 1970. They remain at risk due to vessel strikes, risk of entanglement, and a steep decline in their main food source, krill, which can be linked back to ocean acidification and climate change.

In an effort to protect a unique population of these endangered gentle giants from the threat of vessel strikes, the largest shipping and logistics conglomerate in the world, Mediterranean Shipping Company (MSC), has rerouted their shipping lanes near the coast of Sri Lanka in the Indian Ocean. The blue whales here aren’t migratory and have distinct vocalizations. The vessels will now travel about 15 nautical miles (roughly 17 miles) to the south of the previous shipping route.

“MSC Mediterranean Shipping Company has taken a major step to help protect blue whales and other cetaceans living and feeding in the waters off the coast of Sri Lanka by modifying navigation guidance in line with the advice of scientists and other key actors in the maritime sector,” MSC said in a statement provided to Insider.

The move comes in response to a request from the International Fund for Animal Welfare (IFAW) and OceanCare. According to the IFAW, Sri Lankan blue whales are in these waters year round. Current international shipping lanes off Dondra Head bring vessels right through the area with the most whales and whale watching activity.

“By ensuring these small changes, MSC is making a significant difference for these endangered whales. Whales often die as a result of collisions and this population is at risk. Ship strikes are both a conservation and a welfare problem, and even one whale death is one too many,” said Sharon Livermore, Director of Marine Conservation at IFAW, in a press release.

This voluntary rerouting from MSC does not impact other shipping carriers in the area (like Hapag-Lloyd or Maersk), but environmental advocates hope that this could lead to a chain reaction of permanent changes to the official shipping lane that would impact all container ships. According to the IFWA, research shows that adjusting the shipping lane would reduce the risk of a ship striking a whale by 95 percent.

“Re-routeing is the key hope to turn the tide for blue whales off Sri Lanka. It also demonstrates to the Sri Lankan government that now is the time to take appropriate action and move the shipping lane out of blue whale habitat for all merchant vessels,” said Nicolas Entrup, Director International Relations at OceanCare, in a press release.

[Related: Whale-monitoring robots are oceanic eavesdroppers with a mission.]

While commercial whaling is banned worldwide, blue whales were on the brink of extinction as recently as the 1960s. The ban on whaling helped the population rebound, but populations are still lower than pre-whaling numbers. It’s estimated that there may have been about 200,000 to 300,000 whales in the Southern Hemisphere before commercial whaling, compared to 2,300 in 1998. Populations are rising at about 7 percent per year.

Vessel strikes are a major issue for a number of whale species, not just blue whales. The critically endangered North Atlantic right whale (Eubalaena glacialis) is especially suffering—NOAA Fisheries has documented four lethal (death and serious injury) right whale vessel strike events in US waters over the past two and a half years.

There are fewer than 350 right whales in the wild and they are not reproducing fast enough to maintain their numbers. In July, NOAA Fisheries announced proposed changes to vessel speed rules to, “further reduce the likelihood of mortalities and serious injuries to endangered right whales from vessel collisions.” The proposed changes would broaden the spatial boundaries and timing of seasonal speed restriction areas along the eastern coast of the United states and expand the mandatory speed restrictions of 10 knots or less to include most vessels 35–65 feet in length.