Ships could seed clouds for lightning. 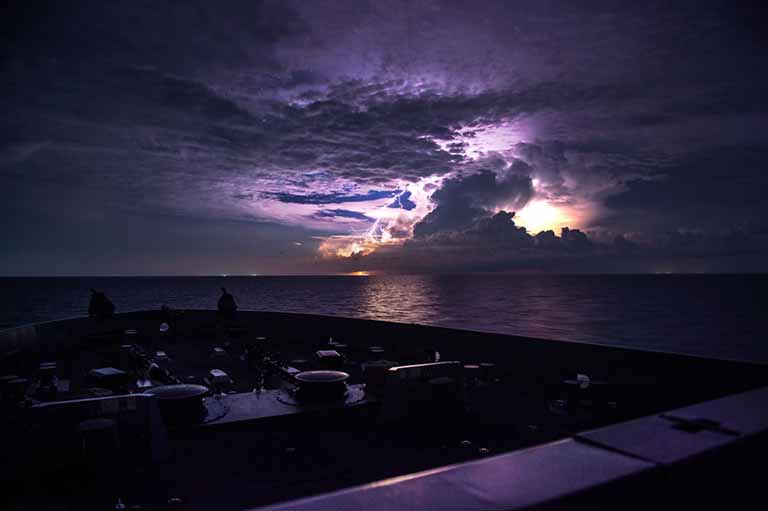 Lightning tends to trigger in us a sense of awe, of reverential respect mixed with wonder and fear. When bolts of electricity streak across the sky and thunder claps so loud you can feel it in your body, well, it becomes pretty clear why our ancestors so frequently attributed storms to the gods: Xolotl in the case of the Aztecs, Zeus in the case of the Ancient Greeks, and Thor in Norse Mythology.

But a recent study in the journal Geophysical Research Letters gives humanity the credit for at least some of our planet’s thunderstorms. The researchers found that pollution released by boats as they traverse shipping lanes can and does trigger lightning storms. A lot of lightning storms. In fact, these areas of oceanic congestion see up to twice as many storms as would otherwise be expected. Who knew that the push to feed our online shopping addictions could have so much power?

Researchers have known for a while that if you pump small particles into the atmosphere you can get a thunderstorm, where lightning forms. Lightning forms in clouds with a mix of ice, liquid water, and a kind of vigorous up and down motion called updraft. As heavier ice particles—a sort of small hale that nephrologists, or cloud researchers, call graupel—move downward thanks to gravity, smaller, snowier particles move upward because of the updraft, bumping into each other and their respective electrical charges. Graupels generally carry a negative electrical charge, and the snowy floaters a positive one. So when they bump into each other, you get a bit of electrical discharge—the sparks we see as lightning.

To get more lightning, you basically just have to promote that underlying condition where liquid water, frozen droplets, and snowy ice crystals coexist in a cloud, which is where the aerosol particles come in. They basically act as tiny seeds for the clouds to build out from. If it’s too clean up there, fewer cloud droplets form, and they grow big and heavy collecting all the available water around them. That makes them more likely to fall quickly, producing rain without lightning. In other words, tiny bits of crud in the air are what give thunderstorms their dazzle.

But it wasn’t clear to what extent human activities that release these particles (like driving exhaust, emissions from coal and natural gas power plants, and yes, ship engines) were contributing to the planet’s electric emissions. In 2004, Robert Holzworth of the University of Washington began creating a network of sensors, called the Worldwide Lightning Location Network, to help figure it out.

“There’s a disturbance in radio waves in the atmosphere whenever there’s a lightning flash,” says Joel Thornton, an atmospheric scientist at the University of Washington in Seattle. “If you just have sensors located in different parts of the world where you can detect the disturbance, when sensors have detected it at different times you can triangulate the disturbance and locate where that flash occurred.”

By digging into the data, Thornton’s co-author Katrina Virts, a researcher with NASA Marshall Space Flight Center in Huntsville, Alabama, was able to create a sort of map of strikes.

“She pointed out that there were two strips that looked like shipping lanes,” says Thornton. And sure enough, they found that the strikes were indeed happening more frequently over shipping lanes—right atop the boat traffic.

Thornton’s own interest in aerosol particles—and their relationship with cloud formation and thunder storms—led him to realize that the catalyst was particles from the ship exhaust. Unlike the wildfires, dust, and pollution we have everywhere on land, the deep ocean don’t have as many particles. Putting a lot of particles into a narrow strip of an otherwise particle-barren stretch of sea is what caused such a dramatic uptick in storms.

This isn’t the first time we’ve seen sooty particles triggering lightning: it’s the underlying cause behind the so-called dirty thunderstorms that sometimes form bolts inside clouds of volcanic ash. But this study suggests that what we’re doing on the ground doesn’t just have a long-term effect on climate. Our activities (and our emissions) can also immediately impact the weather.

“By adding particles from the ship exhaust to the atmosphere, we may be turning some rainstorms into thunderstorms,” says Thornton.