Bison are bringing biodiversity back to Kansas prairie land

A local look at bison and cattle grazing shows how the two could work hand-in-hand. 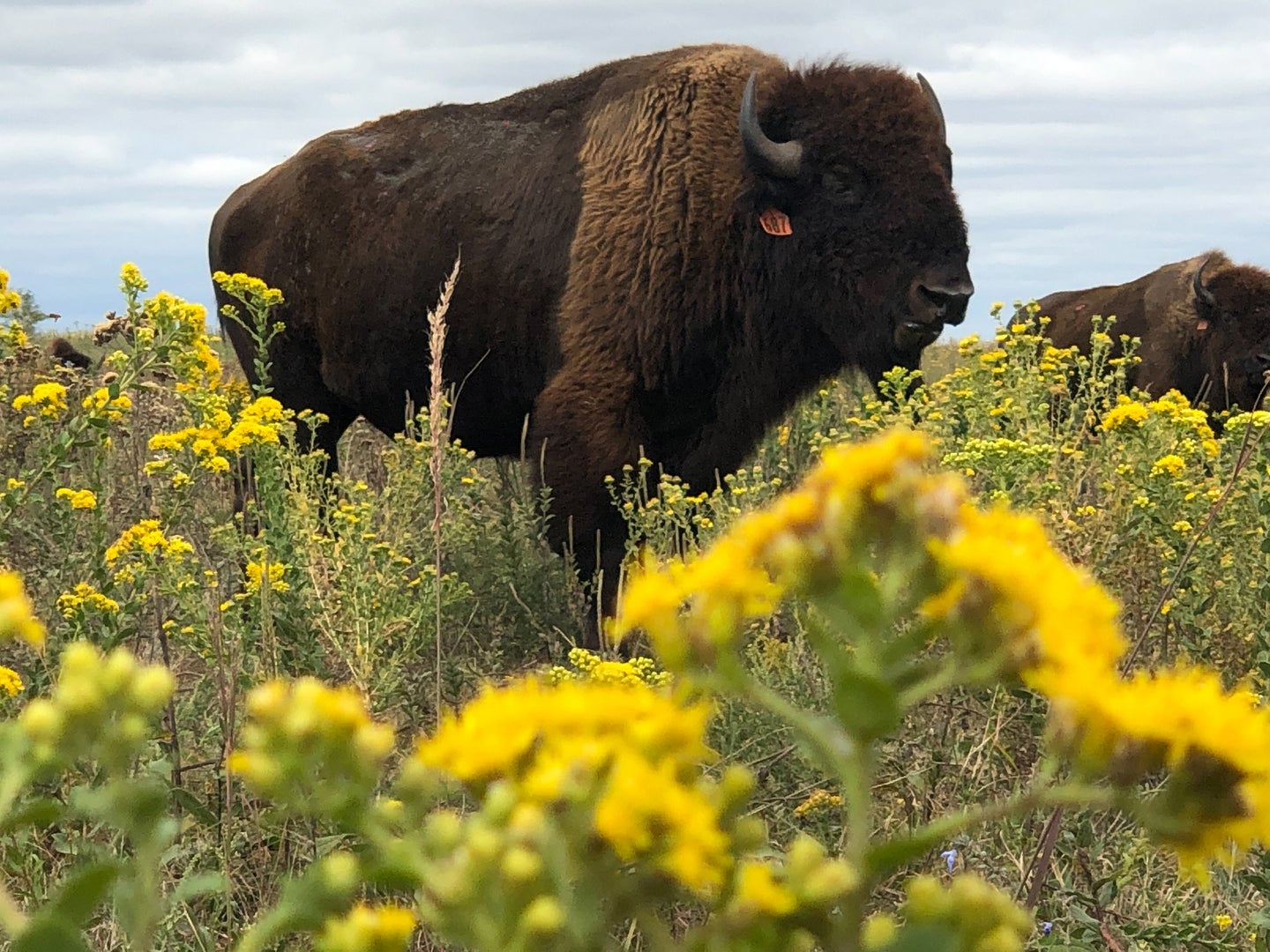 American bison were once so numerous that in 1889 the superintendent of the National Zoo wrote that trying to count them would be like tallying “the number of leaves in a forest.” It’s much of the reason why the exact ecological impact of North America’s largest land mammals was never measured, before colonizers hunted them to near-extinction in the 19th century. But current efforts to restore them to their historic range have affirmed what conservationists and Native Americans have been saying for decades: Bison are critical to the prairie’s health.

New research on the long-term benefits of reintroducing bison shows that their presence makes the land more biodiverse and resilient to drought. A paper published this week in the journal PNAS measures the ripple effects of the giant grazers on the tallgrass prairie ecosystem that used to stretch from modern-day Texas to Minnesota and cover 170 million acres of North America. Today, only about 4 percent of the old-growth prairie remains, mostly in the Flint Hill region of Kansas where the study took place. The data, which spans multiple decades following the bison’s return, is unequivocal: The herbivores more than doubled the number of native species in tallgrass habitats.

[Related: Wolves and beavers can have magical ecosystem effects—if they have space to thrive]

“Bison are the type of organism you’d expect to have a large impact,” says Zak Ratajczak, a biologist at Kansas State University and lead author of the study. “They’re very large, travel long distances, and can consume plant species on a scale that changes competition.”

They also specialize in eating big bluestem and other tough grasses that are more likely to be passed over by other herbivores—including non-native cattle. These grasses grow fast and tall, shading out other plants that serve a wide range of functions, such as wildflowers that support pollinators and legumes that fix nitrates in the soil. Given enough time, says Ratajczak, “the cumulative, cascading impacts [of the bison] are large.”

Since the 1980s, scientists at the 8,616-acre Konza Prairie Biological Station in Kansas have documented changes to plant biodiversity with the reintroduction of the bison herd, whose numbers in recent years have held steady between 275 and 300. For comparison, they also tracked the health of areas of tallgrass prairie that were munched down by cattle, as well as parts that went entirely untouched.

Besides the clear positive impact of the bison, they found a few other key differences. First, while cattle grazing wasn’t even half as effective as bison grazing, it was better for biodiversity than no grazing at all. And second, bison-occupied prairie was better able to weather periods of drought, thanks to greater variety in plant species and newly stimulated growth from grazing.

“It’s heartening to see resilience that it could weather some degree of warming,” says Ratajczak, pointing out that this will be especially important with the predicted increase in intensity and frequency of extreme heat in the near future due to climate change.

[Related: The secret to curbing farm emissions is buried in the Stone Age]

Eric Patterson, the head ranger at the Tallgrass Prairie National Preserve, sees the park’s herd of about 100 reintroduced bison having a similar impact on the variety and abundance of local plant species. He tells visitors of the nearly 11,000-acre site, which is located in same Flint Hills region as the research station, that “grazing is a fundamental component to maintain balance in the prairie ecosystem,” along with moisture, fire, and human use.

Still, both Patterson and Ratajczak stress that, while returning bison to the prairie is fantastic as far as biodiversity goes, it’s not a conservation cure-all. Historically, the megafauna likely played a central role in balancing life on tallgrass prairie—but only about 4 percent of that ecosystem remains intact. Today, cattle grazing, agriculture, and urban development dominate the Great Plains.

“I could see how people could see this as a cattle versus bison story,” says Ratajczak. “But an important thing I hope doesn’t get lost is that cattle can have a positive impact on native species, too.”

To that end, Patterson says some biologists are using the knowledge they’re gaining from studying reintroduced bison to develop cattle-grazing practices that mimic the wild herbivore’s impacts. He and Ratajczak also point out that in recent decades, cattle ranchers have helped maintain the critical burn regimen previously sparked by lightning and Native Americans.

[Related: For prairie flowers, fire is the ultimate matchmaker]

“Bison earn every accolade they get, but there aren’t many left,” says Patterson. Findings from pockets of intact prairie like the Kansas Flat Hills need to be adapted for the grazers—and landscapes—we still have.

“Places like [the Tallgrass Prairie National Preserve] are awesome,” Patterson adds. “But 11,000 acres is just a museum artifact if we fail in the larger mission to encourage better stewardship of everything else.”