Volcano decides eruptions are boring, tries sliding into the sea instead

Mount Etna is having trouble keeping it together. 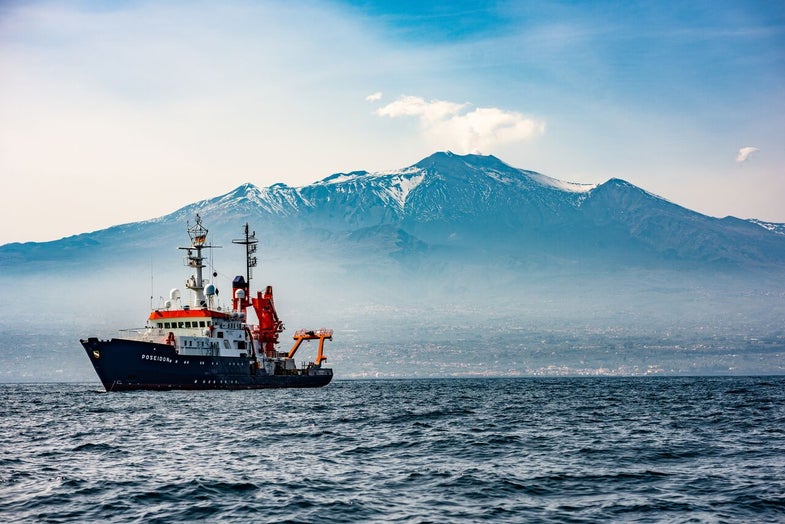 Some volcanoes bring disaster the old fashioned way—a violent eruption that floods the surrounding landscape in hot lava and heaps of ash, destroying all the plant and animal life in its wake. But there are other sorts of volcanic catastrophe. For some, like Mount Etna, disaster might strike simply because the volcano is unable keep itself together. Literally.

In a new study published in Science Advances, a team of German researchers illustrate how the southeastern flank of Mount Etna, Europe’s most active volcano, is sliding into the Ionian Sea. If that slow creep gives way to a rapid collapse, it could trigger disaster in the form of mega-tsunamis that threaten millions of people living nearby and on the Mediterranean coastlines.

It’s no secret that Mount Etna, sitting 10,000 feet high along Sicily’s northeastern edges, is in rough shape. Data since the ’80s has shown how mobile and unstable the eastern flank of the volcano is, even while the rest of the sides, buttressed by surrounding mountains, are relatively solid. Ancient signs of this instability include landslide scars on the mountain, like the prominent “Valle de Bove,” close to the summit. About 8,000 years ago, another flank collapse may have devastated coastlines in modern-day Israel, 1,000 miles away.

“Mount Etna is one of the best investigated volcanoes in the world, and almost every kind of monitoring data is available,” says Felix Gross, a researcher at the University of Kiel in Germany and a coauthor of the new study. “However, this is only valid for the onshore [portions], while the volcano continues underwater. There is a huge scientific discourse about why Etna’s southeastern flank is sliding seawards.”

The new findings, based on observations collected from April 2016 to July 2017, paint for the first time a bigger picture of what’s going on underwater. The research team took advantage of newly available sound-based underwater instruments, placing five acoustic transponders along the fault line that separates the sliding flank from the stable slope, measuring movements to under a centimeter in distance. Things were mostly stable, except for a May 2017 “slow slip event” where the flank’s underwater portion slipped by four centimeters in just eight days. The section above sea level changed by a similar distance during the same event.

These observations reiterate that the major cause of slippage into the Ionian Sea is not internal magma activity pushing things out, but rather gravity simply pulling the rock down. This makes sense, since the motion of the mountain occurs in seemingly random bursts, rather than correlating with internal volcanic grumblings.

More importantly, however, the findings suggest that a number of factors could trigger an extremely rapid deformation of the flank, starting above sea level and cascading into a giant splash. That kind of fast slippage might be incited by internal volcanic or geological activity, but the new study suggests it could also happen without much of a reason at all. Either way, it would likely be harbinger for a disastrous tsunami.

“Catastrophic flank collapses have happened in the past,” says Gross, “and there are historical and geological evidences for this.” One recent example is Ritter Island in 1888, in which a chunk of rock roughly four cubic kilometers in size broke off the local volcano and landed in the Bismarck Sea. The resulting tsunami created waves reaching over 25 feet high, landing on parts of New Guinea hundreds of miles away.

And there would be no way for us to prevent an impending collapse. No sort of barrier or structure is going to stop the side of a volcano from falling into the sea.

The new study might also be a bit too cautious for its own good. Just this past year, another group of European scientists found that the entire volcano was slipping down at an average of 14 millimeters a year, and also spreading in all directions by several centimeters annually. Benjamin van Wyk de Vries, a French researcher at the Université Clermont Auvergne who worked on that study, emphasizes that “the whole colossal mountain is sliding, not just a bit.” Like the new study, it’s too early to consider what those results specifically mean for assessing potential future threats, but at the very least, they serve to illustrate just how little we really know about Etna.

The lack of data and analysis also goes the other way—cautioning us from getting too alarmed just yet. “In general, a volcano flank does not collapse as a single block, rather than in multiple failures,” says Gross. “At the moment, we do not see any indications for this acceleration. But we see the need to further monitor the volcano’s flank.” Furthermore, with scientists watching Mount Etna 24-7, “an acceleration and a potential failure of the entire flank would be recognized early enough to react,” he says. That’s comforting news for a world that’s very well acquainted with how much havoc a tsunami can wreak. In the meantime, it would be nice if Mount Etna could just keep it together.