Carcasses are the best clues we have for these mysterious whales 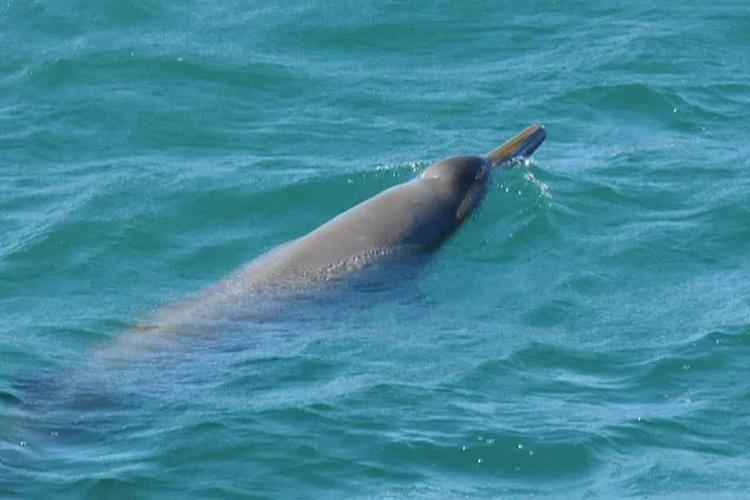 Sowerby's beaked whales live in the east and west Atlantic, where they are elusive and prefer deep waters.
SHARE

In the dark waters of the benthic zone, the deepest layer of the ocean mostly populated by invertebres like sea urchins, worms, and crabs, mysterious whales hold their breath. Beaked whales as a group of species have long been elusive to humans, but new research is shedding light on the habits of these creatures, with the discovery of two new subpopulations in the Atlantic.

“I can remember when I ran the analysis, I almost started crying,” says Kerri Smith, a research fellow at the Smithsonian National Museum of Natural History who studies beaked whales. “I was so excited, because it was totally new. For like an hour, I knew something that nobody ever in the entire world knew.”

Smith’s recent research looked at the remains of Sowerby’s beaked whales that were stored in museums and research centers or stranded or bycatch from fisheries. By analyzing certain chemicals within the whales’ skin, muscle, and bone tissue, researchers were able to figure out that there are two subpopulations of Sowerby’s beaked whales in the east and west Atlantic. The results were published in the journal Frontiers in Conservation Science and will likely provide the foundation for a more detailed understanding of these species, as well as shape future conservation efforts.

Very little is known about the lives of beaked whales despite the fact that they make up more than 25 percent of extant cetaceans (the group that includes dolphins, porpoises, and whales). Unlike other animals that swim near the shore or the surface of the sea, beaked whales prefer deep, offshore waters, making them difficult to find and track. Their dark grey or black coloring and small dorsal fin make them even harder to distinguish from the ocean around them.

There are currently 23 recognized species of beaked whales, although some have never been seen alive and are only known from stranded carcasses. But this number could easily grow or even shrink. If, say, one individual thought to just be a weird-looking version of a known species turns out to be an entirely different species through DNA analysis, as happened recently in Japan.

Beaked whales generally spend much of their time in the deep depths of the open ocean—and we’re not really sure what they’re doing down there. We do know their bodies have evolved to spend long periods of time at these depths. The Cuvier’s beaked whale holds the mammalian records for both the deepest dive (almost two miles beneath the surface) and longest length of time holding breath (137.5 minutes).

“They’re such large animals compared to us and we still know so little about them,” says Chris Stinson, a curatorial assistant at the Beaty Biodiversity Museum in Vancouver where he presides over the skulls and skeletons of several beaked whale species. “They’re out in the open ocean, living in a totally different world where they come up to the surface for a breath, and then spend 80 percent of their time underwater, hunting for things, using senses that we can’t even comprehend.”

Some beaked whales feast primarily on fish from the water column, while others are thought to be specialists of the squid in the deep seas, and still more love the benthic depths where they nibble on fish off the seafloor. While cetaceans as a whole are known for being social animals that live in groups, little is known about the day-to-day habits of the beaked whales.

“Because they’re so challenging to study when they’re actually alive, almost everything we know about beaked whales comes from dead bodies,” says Smith. “It’s really hard to infer what they were doing when they were alive in terms of their social bonds or play or things like that from dead bodies.”

But there’s a lot of information that can be gained from dead bodies, as Smith’s recent research showed.

The team looked at carbon and nitrogen in the whales’ bodies, which revealed information about where the cetaceans lived and their position in the food chain. The type of analysis they used, called stable isotope analysis, has the benefits of being fast and relatively inexpensive. This makes it an ideal application for the elusive beaked whales, as tracking and locating them can be so difficult and costly.

By studying other elements in the future, like oxygen, hydrogen, and sulfur, the technique could give more insight into the secretive whales’ habits and environment. Smith hopes to conduct genetic analysis in the future to further understand the two subpopulations of Sowerby’s beaked whales.

Right now there are no conservation or management plans for beaked whales because we know so little about them. They are considered “data deficient” by the International Union for Conservation of Nature, meaning there is not enough information available to evaluate  extinction risk based on distribution and/or population status.

But research like Smith’s can teach us more about these elusive species’ homes and patterns of movement, which could shape future conservation strategies.

“We literally cannot conserve what we do not know,” Smith says. “We don’t know where these animals are, we don’t really know what habitats they are using— [there’s] sort of that catch-all deep offshore shelf waters but what does that mean? Where are they? What shelfs are they using? Are there ones that need more protection than others? Until we have some answers to those questions, we can’t enact really concrete, meaningful, actionable plans.”