Six Months After The Leak, We Survey The Deepwater Horizon Disaster Up Close

We spent twenty-four hours on a Greenpeace boat in the Gulf of Mexico looking for oil and dispersant among marine life. On the six-month anniversary of the leak, we report back 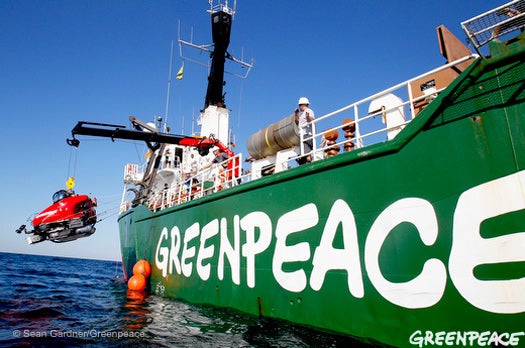 A crane onboard the Arctic Sunrise lowers researchers Steve Ross and John Hocevar into the Gulf of Mexico in the Dual DeepWorker 3 submarine. Sean Gardner/Greenpeace
SHARE

Greenpeace is known for its controversial “actions.” Take, for example, their action late last month against oil giant Chevron, in which two activists dangled from the anchor chain of a drill ship to keep it from reaching its destination off the Shetland Islands. Perhaps lesser known is the organization’s support of independent scientific research, like its current campaign to investigate the marine impact of the BP oil spill—which occurred six months ago today—and the use of toxic dispersant to clean it up.

Late last week I had the unique opportunity to spend a day on one of Greenpeace’s three ships, the Arctic Sunrise, in the Gulf of Mexico during the final leg of the group’s three-month-long oil spill campaign. A helicopter picked me up near Gulfport, Mississippi, and transported me directly onto the ship just 20 miles north of Deepwater Horizon ground zero. I spent the next 24 hours observing life onboard, chatting with scientists, and, oh yeah, watching a million-dollar manned submersible get launched into the water.

The current segment of the six-project campaign is devoted to deep sea corals and sponges. Steve Ross, an ichthyologist at the University of North Carolina Wilmington Center for Marine Science, and Sandra Brooke, a coral ecologist at the Marine Conservation Biology Institute in Bellevue, WA, are leading the effort to learn more about these important yet poorly understood marine animals, and to investigate any impacts from the spill on them.

I arrived on Friday just having missed the launch of a benthic, or ocean floor, lander carrying live corals to a site 30 miles northeast of the BP spill. The lander is equipped with instruments to measure ocean conditions such as dissolved oxygen, temperature, currents and salinity. It also has a rotating sediment trap that will collect monthly samples of “particulates,” or the stuff raining down the water column. When the lander is retrieved 12 months from now, the researchers will see how the corals faired in the present conditions.

Fortunately, I was onboard for the first manned launch of the sub, which turned out be a nail-biting experience. An anonymous supporter loaned the Dual DeepWorker 3 to Greenpeace. Although it looks a lot like a giant pair of shiny red clogs, DDW 3 is a sophisticated piece of machinery that’s capable of diving to depths of 2,000 feet. Only three of its kind exist (one is co-owned by filmmaker James Cameron, who used it to film underwater scenes for his 2005 documentary Aliens of the Deep). I’ve read a lot about submersibles, but I’ve never stopped to think how they get into the water. Turns out, it isn’t easy to launch a three-ton pair of steel clogs.

Several workers used tag lines (i.e. ropes) to steady the sub as the ship’s crane lifted it off the deck. Despite the best efforts of these burly seamen, the craft rocked back and forth and twisted in the wind. The captain and the head rep for the sub donor watched on edge as a too-early release from the crane resulted in a splash down into the water. The sub and its two-man crew were fine, though, and within a few minutes they disappeared from the surface and dove down to the ocean floor.

I headed to the bridge, where I watched the seasoned, Crocs-clad skipper Pete Willcox, at the helm. Representatives from Deep Ocean Exploration and Research (DOER), the marine consulting firm contracted to operate the sub, stayed in constant contact with the craft’s occupants via an underwater telephone. Two hours later, the sub returned to the ship after an unsuccessful attempt to find the lander on the ocean floor. (After I flew off the ship the next morning, the sub team found the lander and observed some teeming reefs.)

That night, I sat in on an all-crew meeting in the mess after dinner, where the team discussed ways to improve the sub launch-and-retrieval process. What could have been a contentious gathering of three different factions—Greenpeace, the sub donor’s reps, and DOER—played out as a quick, productive discussion and pep talk. I’ll say this: The rough-and-ready men and women aboard the Arctic Sunrise run a good meeting. (The next morning’s launch was much smoother, by the way.)

After the meeting, I sat down to talk with scientists Ross and Brooke about the animals they’re researching. I was surprised to learn that the red, pink, gold and black corals used in jewelry are among the oldest animals on Earth. Specimens of black corals have been dated to 4,000 years ago, making them the oldest animals known. Brooke calls harvesting these creatures for jewelry, a common practice in the deep waters off the coasts of Asia and Hawaii, a “travesty.” Deep sea corals, which are found all over the world, are also threatened by the fishing industry—trawling for orange roughy is a major concern—and could be impacted by ocean acidification, which has already depleted the world’s shallow-water corals. And then, of course, there’s the oil. So far there haven’t been any obvious signs of oil or dispersant during the dives, and both Ross and Brooke told me they doubted they’d see any impacts directly during this cruise. “I think we got lucky,” Brooke said. She added, however, that the effects of the oil or dispersant could be more subtle, impacting the corals’ reproduction, for example.

A huge amount of data exists on shallow water corals, thanks in large part to the invention of SCUBA. But although deep sea coral reefs have been known for several hundred years, they’ve only been studied heavily in the past two decades, and little is known about their ecology. Ross and Brooke are hoping to change that with their research. The Greenpeace cruise was one of four deep-sea expeditions they’re undertaking this year. “We want to establish baseline information that says, These are the habitats the corals are healthy in now,” says Ross. “People would kill for these databases later.”

When I asked the researchers why it’s important to study deep sea corals, both became impassioned. “Old corals are archives of environmental information,” Ross said. By analyzing these animals, researchers can piece together a picture of their ancient environment. “A colleague of ours looks at stable isotopes such as nitrogen, carbon and oxygen in the skeletons of corals to see what was being consumed in the ecosystem at the time,” Brooke said. Old corals also contain heavy metals that tell us about ancient volcanic eruptions. And their magnesium-carbon ratios can be used to calculate ocean-floor temperatures dating back thousands of years. Ross says that the deep-ocean species also have practical applications. A number of labs and universities are studying sponges as biomedical products—one of these species, he says, could hold the cure for cancer. “But these habitats deserve to be protected in their own right,” Ross added. “We don’t know if 4,000-year-old corals can reestablish today.”

Next I spoke with John Hocevar, oceans campaign director for Greenpeace USA. Hocevar, a marine biologist, is piloting the twice-daily submersible dives off the Arctic Sunrise. According to him, at least two of the other research teams participating in the three-month project have found impacts from the spill. “Scientists from Tulane University looking at blue crab larvae are 95 percent sure they’ve found dispersant in their samples,” Hocevar said. Corexit, the dispersant BP used, is a known toxin. Texas A&M University researchers found indications that there is a substantial plume of oil more than 3,000 feet below the surface in a site more than 100 miles west of the spill site. “That same team took sediment samples from the bottom of the Gulf,” Hocevar said. “You could see and smell the oil in them.” The team is now working on “fingerprinting” the oil to confirm that it came from the BP spill.

Hocevar thinks the most alarming results could come out of another of the campaign’s projects, in which acoustic buoys were used to record vocalizations of beaked and sperm whales in the northern Gulf. “There’s really good baseline acoustic data,” he says. “If we don’t hear similar numbers of whales, the questions will be: Did they leave and were they fleeing the oil? Where did they go? Or did they die?” The National Oceanic and Atmospheric Administration estimates that losing as few as three of the 1,400 sperm whales in the region could wipe out the population.

Hocevar adds, “One important message I want to get out is that science is slow. It’s far too early to claim that we can understand what the impacts of the disaster are. It will be a long time and will take a lot of work to fully understand what the damage has been.”

The next morning, on board the helicopter back to Gulfport, I took in the beauty of the Gulf’s waters. Schools of fish flashed at the surface, and I wondered what was happening deep below.

A crane onboard the Arctic Sunrise lowers researchers Steve Ross and John Hocevar into the Gulf of Mexico in the Dual DeepWorker 3 submarine. 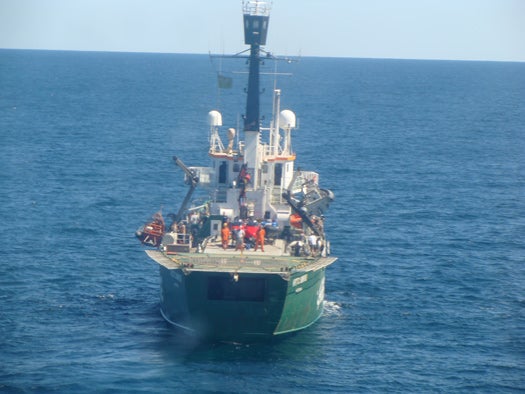 My view from the helicopter as we approach the helipad on the Arctic Sunrise, one of three Greenpeace ships. The vessel it is nearing the end of a three-month-long deployment to study impacts on marine life from the BP oil spill. 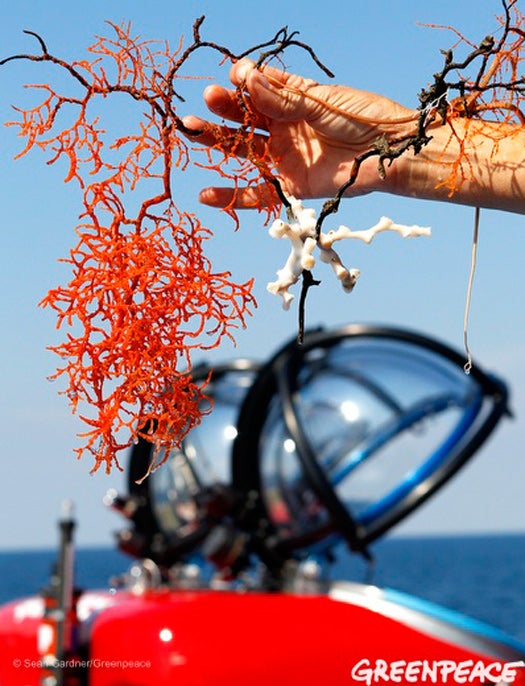 Coral Samples From The Bottom Of The Ocean

Researcher Sandra Brooke holds a sample of black coral (left) and Lophelia coral collected from the bottom of the ocean by the Dual DeepWorker 3 submersible. Specimens of black coral have been dated to 4,000 years ago, making them the oldest animals on Earth. 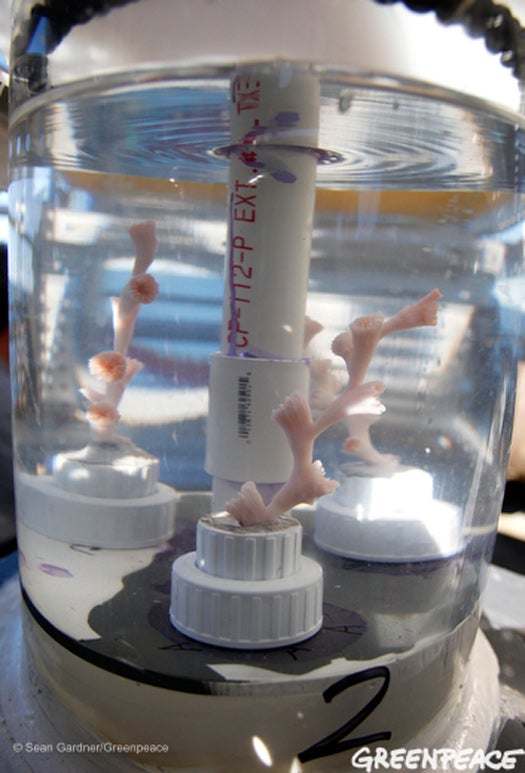 Coral On A Mission

Researcher Sandra Brooke sent this dyed Lophelia coral down to the ocean floor in the benthic lander. The lander will used to take long term observations on the sea floor while conducting biological experiments. 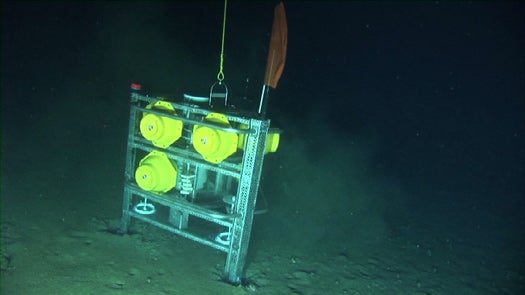 A view from the sub of the benthic lander safely installed on the seafloor. 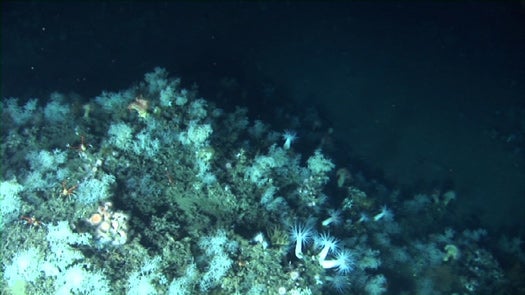 A teeming deep sea coral reef photographed from the sub. All of structure-forming deep sea corals are branching, rather than the familiar boulder-like shallow water reefs. “As they get bigger, they die on the bottom,” explains researcher Sandra Brooke. “You end up with a big mound of dead coral all filled in with sediment with an outer layer of live colonies resembling a big thicket of branches.” 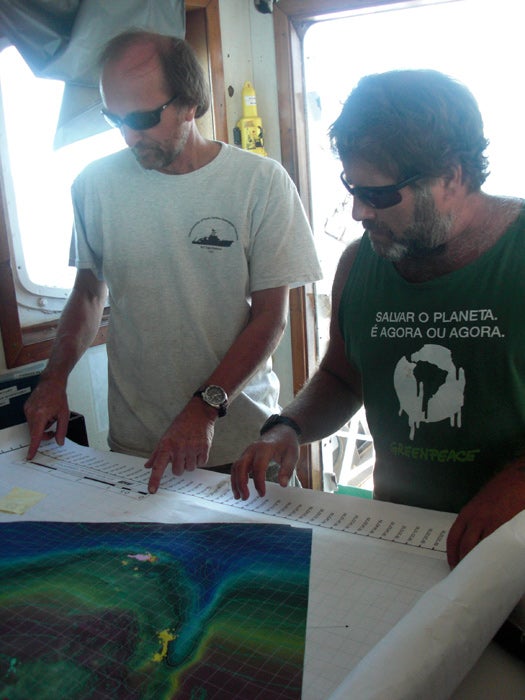 Researcher Steve Ross (left) and Arctic Sunrise captain Pete Willcox plot the course of the sub from the bridge with the help of a colorful sonar map showing known coral reef sites (pink and yellow areas). 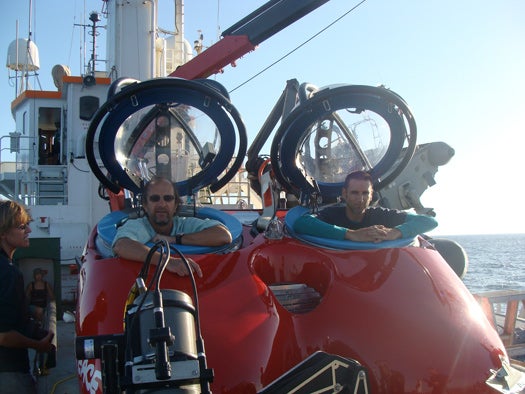 Researcher Sandra Brooke (left) chats with Steve Ross and John Hocevar before a dive. Hocevar has piloted roughly 20 sub dives in his career. 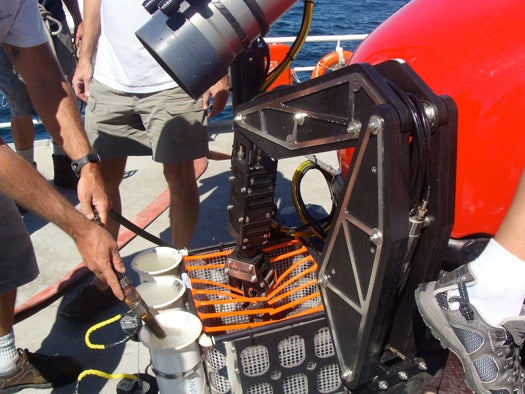 A so-called manipulator arm, controlled by the sub pilot, is used to collect samples from the sea floor. Specimens are gingerly placed in the basket or the white “quivers,” which are equipped with lids. 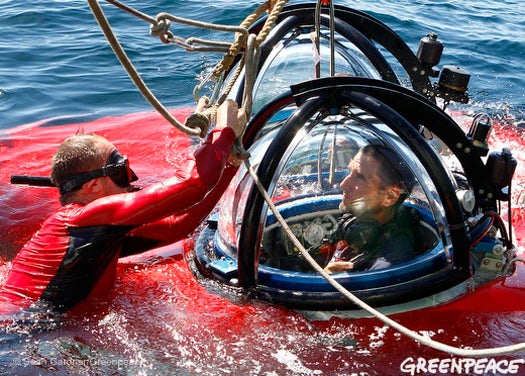 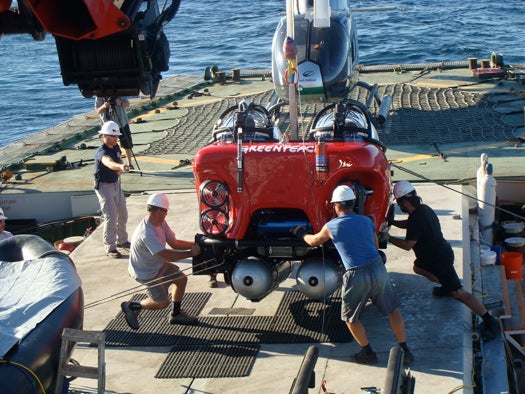 Guiding The Sub Back Aboard

The crew helps guide the sub back onto the deck after a dive. The helicopter I flew in on is visible in the background. 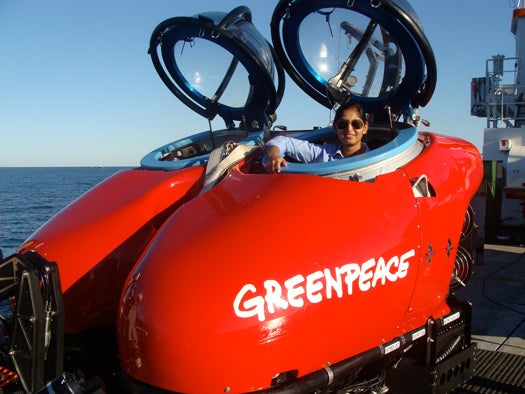 The Author Inside The Sub

No, I didn’t get to dive down to the ocean floor—but I did get this sweet photo op inside the sub while it was parked on deck. 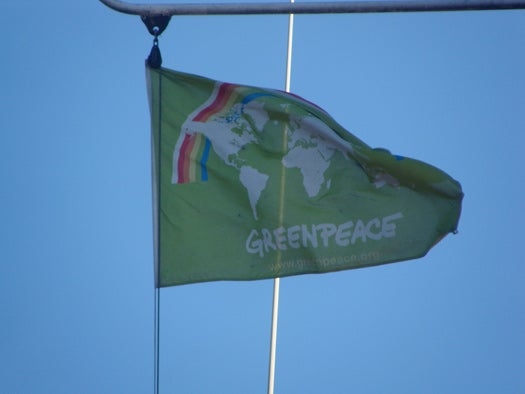 Greenpeace is nearing the end of a three-month long campaign in the Gulf of Mexico to investigate impacts on marine life from the BP oil spill.
deepwater horizon
Environment
feature
Greenpeace
marine life