Derived in part from old cooking oil, the special fuel powered one of the A380's four engines. 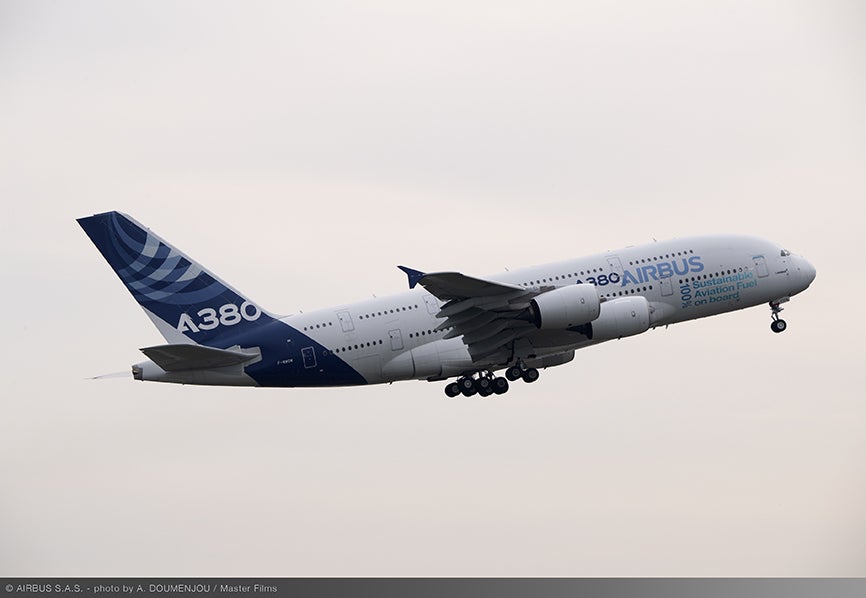 The Airbus A380 used in the tests. Airbus
SHARE

Airbus may have decided to stop producing its double-decker A380 aircraft more than three years ago, but the company is now using one of those giant planes as a testbed to experiment with technology that could play a role in the future of aviation. Last Friday, an A380 test aircraft flew for some three hours with one of its four engines powered by 100-percent sustainable aviation fuel.

Airbus flew the same A380 again today, this time for about two hours, and again with one engine getting its power from 100-percent sustainable aviation fuel, or SAF. In these tests, the aircraft’s other three engines burned conventional jet fuel.

Airbus has flown other aircraft using 100-percent sustainable aviation fuel before—both its A350 and A319neo last year—but these recent flights mark the first time it has experimented with the A380, the biggest passenger plane there is. Steven Le Moing, Airbus’s SAF program manager, describes the SAF-powered engine’s performance as completely “normal” and was the same as what they’d seen in previous tests on the other aircraft.

The plane’s test pilot, Wolfgang Absmeier, reported the same. “We didn’t notice any difference, from a pilot point of view,” he said in a video. “The engineers in the back, they were looking at 1,000 parameters, but at first glance, there was no difference at all.”

Commercial aircraft are already allowed to fly on a mix of regular jet fuel and SAF—as much as 50 percent SAF—but what makes these tests interesting is that one engine was running on 100-percent sustainable aviation fuel. In this case, the fuel in question mostly came from “used cooking oil, as well as other waste fats,” Airbus says. It’s called a HEFA fuel, which stands for hydroprocessed esters and fatty acids.

[Related: All your burning questions about sustainable aviation fuel, answered]

Joshua Heyne, an associate professor of mechanical and aerospace engineering at the University of Dayton, says that “there’s interest from industry to move to the fuel that Airbus tested for this flight.”

However, he says that questions remain about using this type of SAF in the 100-percent form, as opposed to a blend of it with the regular kerosene. The first concern he has is about how compatible it is with the materials in the aircraft, as it could potentially impact seals, or o-rings, in the system, and cause leaks.

The second is the potential for the fuel to affect the way the aircraft measures the quantity of the fuel in the tanks, since it could have a different density compared to traditional jet fuel. Le Moing, of Airbus, says that this second issue has been on their radar. “One of the topics that we explore is the behavior of the gauging system,” he says.

The reason that companies like Airbus are interested in sustainable aviation fuels is because they represent one way to make the industry greener, and ideally contribute less to climate change. Sustainable aviation fuels are a complex topic—here’s an explainer—but they should have less of a carbon footprint than the regular stuff when considering their whole lifecycle. Heyne says that the HEFA fuels also produce less soot and are less likely to create contrails, too.

Airbus even has plans to use an A380 to test out hydrogen fuel, although that’s several years away.

Heyne says that the aviation industry is interested in the HEFA-type sustainable aviation fuels that Airbus tested, but he notes that supply availability could be a challenge. “Unfortunately, there’s just not a lot of used cooking oil out there—there’s not enough of it to replace all the aviation fuel we need,” Heyne says, “so we’ve got to look at other pathways.”

Watch a video about the flight, below: