Yet another troubling sign of climate change in the poles. 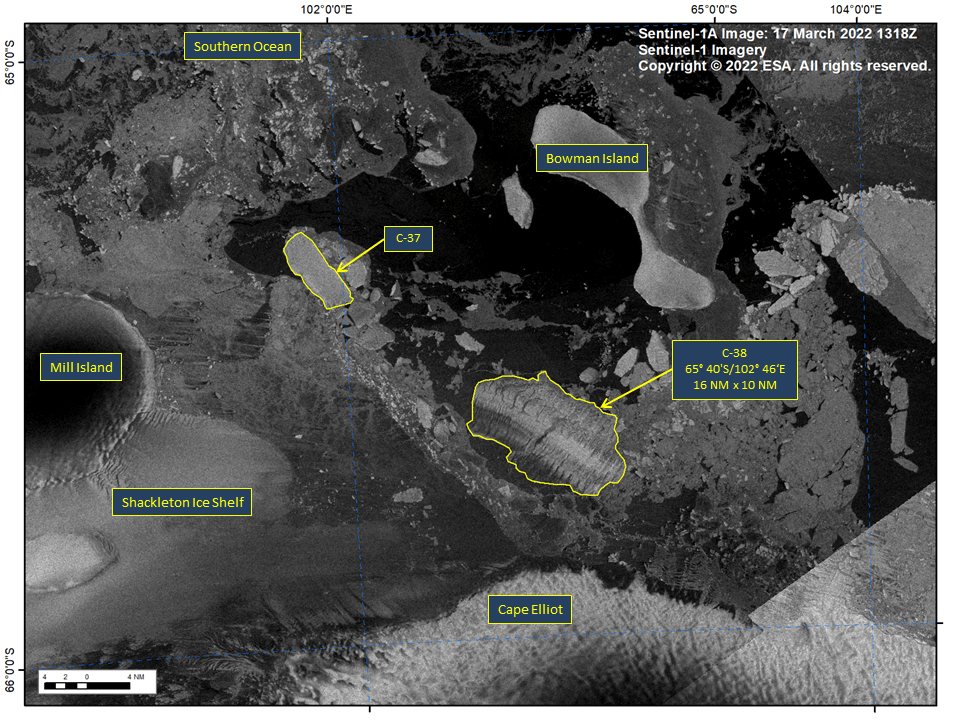 C-38, or almost all that was left of the Conger Ice Shelf, has collapsed as of mid-March. National Ice Center
SHARE

East Antarctica, a corner of the icy landmass once thought to be relatively unperturbed by climate change, has just shown a massive sign of disaster. After a week of incredibly warm temperatures plaguing the poles and record-breaking low levels of sea-ice coverage, scientists have discovered that a massive ice shelf around the size of New York City has collapsed.

Scientists with the Australian Bureau of Meteorology first spotted evidence that the Conger ice shelf had crumbled into the sea on March 17, although they speculate the event happened between March 14 and 16. At 460 square miles wide, the mass of ice is crucial for protecting the Conger and Glenzer glaciers from warmer ocean waters. While ice shelves themselves don’t contribute to sea level rise when they break away or melt, melting glaciers can be a serious problem.

Ted Scambos, a glaciologist at the University of Colorado at Boulder and lead scientist at the National Snow and Ice Data Center, told CNN that this collapse was likely a result of low sea ice levels, as well as wave patterns and warm winds coming from the north. He also added that the Conger ice shelf was pushed up against an island—which could have drastic effects on surrounding glaciers.

“It’s not a very large shelf,” Scambos told CNN. “But every time we’ve seen a shelf that is braced against an offshore island or even the coast of a bay, the glaciers behind it sense that there’s a back pressure, that there’s a force that’s resisting outward flow. In other words, they thin rapidly and they flow faster when the shelf is removed.”

[Related: The ‘doomsday’ glacier is on the brink of collapse.]

The location of collapse on the eastern part of the continent is also a huge wake-up call for scientists. East Antarctica holds around five times as much ice as the especially vulnerable western region, and if all of the ice across East Antarctica melts, global sea level could rise by over 160 feet, University of Minnesota ice scientist Peter Neff told the Associated Press.

“We expect the ice shelves on the west to be doing this but not the eastern ones,” Neff told the Washington Post. “That’s what got folks’ attention. We really need to be more comprehensively tracking all of these processes in east Antarctica. Small mistakes in eastern Antarctica can lead to big oversights.”

In addition to the ice shelf collapse, the region has experienced unusual rainy weather than snow and increasingly warm temperatures. Still, some experts believe East Antarctica is relatively safe from climate change, including British Antarctic Survey geophysicist Rob Larter who called most of the region “​​relatively secure” and “relatively invulnerable” in the Associated Press.

While the Conger shelf makes up  a small portion of the entire Antarctic ice shelf, this meltdown is just another example of what is yet to come, says Matt King of the Australian Centre for Excellence in Antarctic Science. “We will see more ice shelves break up in the future with climate warming,” King told the Guardian. “We will see massive ice shelves—way bigger than this one—break up. And those will hold back a lot of ice–enough to seriously drive up global sea levels.”