It pays to be extra crusty. 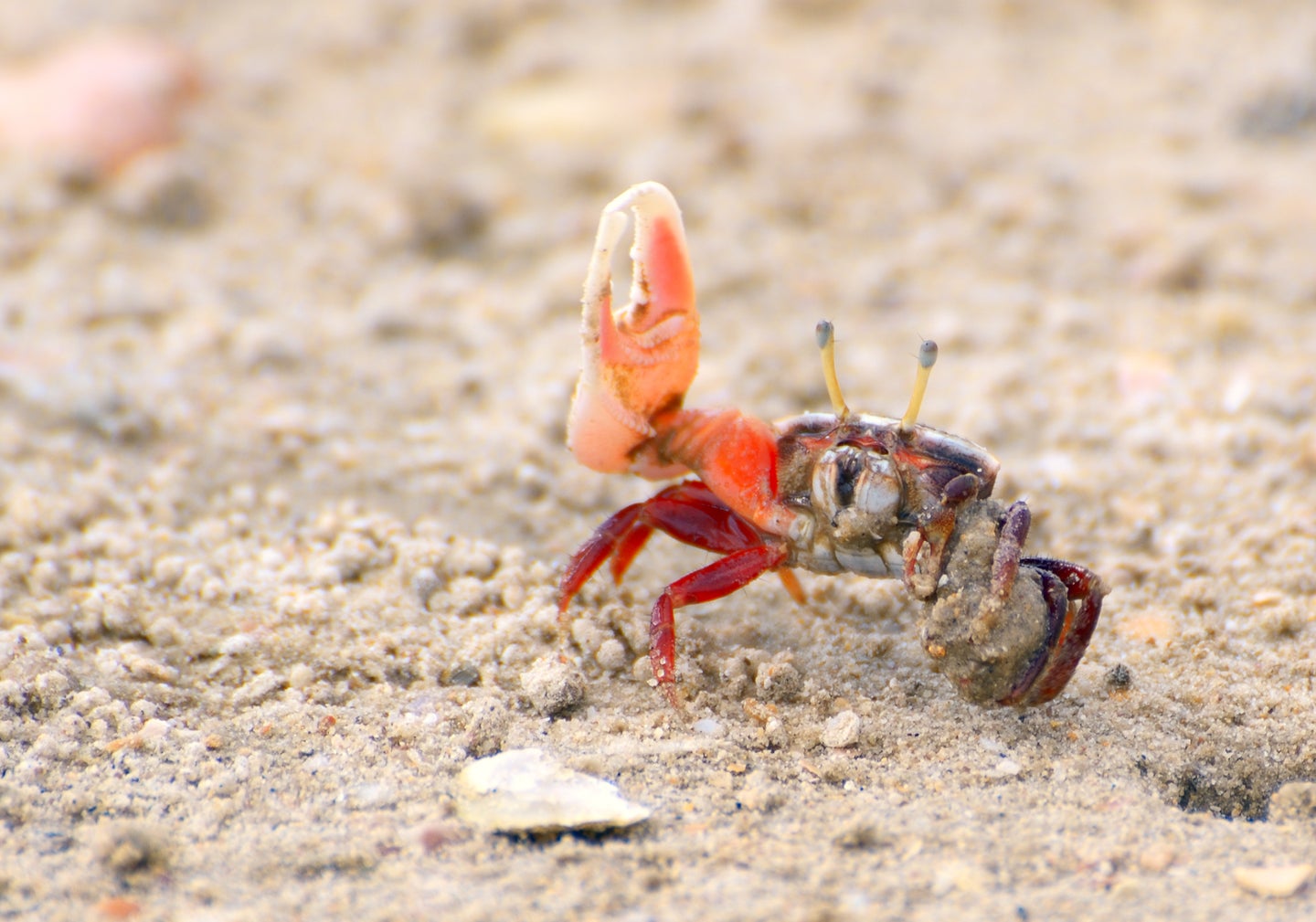 Fiddler crabs and snapping shrimp rely on enlarged claws to impress or fight off members of their own species—and the bigger the weapon, the better the odds of winning over a mate. But large appendages can be a real energy drain.

“[It’s] this kind of slow burn of a cost that happens all the time,” says Jason Dinh, a PhD candidate in biology at Duke University.

However, Dinh has found that these crustaceans have developed a trick to bulk up without spending too much energy. When he examined claws from fiddler crabs and two snapping shrimp species, Dinh observed that larger claws contained relatively more exoskeleton and less soft tissue than smaller ones. Chitin, the main ingredient in arthropod exoskeletons, is much less “expensive” to maintain than muscles, nerves, and blood.

“It turns out that one of the ways that they’re able to bear those [metabolic] costs is to build their weapons cheaply: to invest disproportionately more into the cheap stuff compared to the more expensive muscles,” says Dinh, who reported the findings on February 8 in Biology Letters.

Shrimp and crabs may not be the only creatures to use this strategy. Across the animal kingdom, animals rely on a wide variety of weapons to intimidate rivals, from claws to horns, tusks, and antlers. Generally, large individuals have more spare energy to draw upon than smaller members of their species, which means they can grow hefty weapons that comprise more of their overall body mass, Dinh says.

[Related: Blood, death, and eye gouging: welcome to the world of acorn woodpeckers]

“That’s like a boxing glove that’s half your body weight,” says Ummat Somjee, an evolutionary biologist at the Smithsonian Tropical Research Institute in Panama who wasn’t involved in the research. “It’s a really, really extreme investment, and it has been a puzzle for a long time how they can possibly maintain the physiology to maintain these structures.”

Snapping shrimp, on the other hand, deploy their weapons differently. Both males and females have an enlarged claw that produces one of the fastest movements known in nature, Dinh says.

“They basically cock their claw open and then close it really quickly, and their claw shoots out this jet of water that moves incredibly fast and literally boils a small region of water behind the jet,” he says. “When that bubble collapses, it makes a really loud snap.”

Dinh and his collaborators collected hundreds of fiddler crabs and shrimp from salt marshes and oyster reefs in North Carolina and weighed the deceased crustaceans’ bodies and claws. Dinh then weighed the claws again after exposing them to an enzyme that digested the soft tissue, including muscle, while leaving the exoskeleton intact. “That lets us separate the mass of this animal into its expensive digested soft tissues and its less expensive undigested hard tissues,” he explains.

Across all three species, as the claws increased in size, they contained proportionally more hard exoskeleton and less soft tissue. “The differences were pretty drastic,” Dinh says, noting that the largest male fiddler crabs wielded claws that contained less than half the percentage of muscle mass seen in smaller claws.

[Related: This 90-million-year-old crab had the eyes of a hunter]

Dinh also found evidence that, while it’s easier for large individuals to build oversized weapons, even small crustaceans can benefit from investing in low-maintenance exoskeleton. With the exception of females from one snapping shrimp species, individuals that sported larger-than-average claws for their body size tended to pack less soft tissue into the exaggerated weapons.

Jumbo-sized claws may deter rival crustaceans, but their intimidating size isn’t the only thing that’s impressive. In fiddler crabs, large claws can pinch harder than small ones, despite having proportionally less muscle.

It remains to be seen whether oversized claws come with any trade-offs for the snapping shrimp. To produce their ultrafast movements, the crustaceans use their claws like a spring. “The muscles are only there to load the spring; the thing that’s actually closing the claw is the spring itself,” Dinh says. He’s currently investigating whether shrimp and crabs with exaggerated weapons are indeed more successful fighters.

In future research, Dinh would like to investigate how common massive, energetically cheap weapons are in other kinds of animals. Somjee says the claws described in the new report fit the patterns he’s observed in several kinds of insects.

“This might be a pretty wide-ranging phenomenon,” says Somjee. “It’s not necessarily that these animals can invest in these large traits and are paying super high costs for them, it’s that they have found cheap ways to have really big traits.”