In the years after the Second World War, airplanes were starting to fly higher and faster thanks to new streamlined... 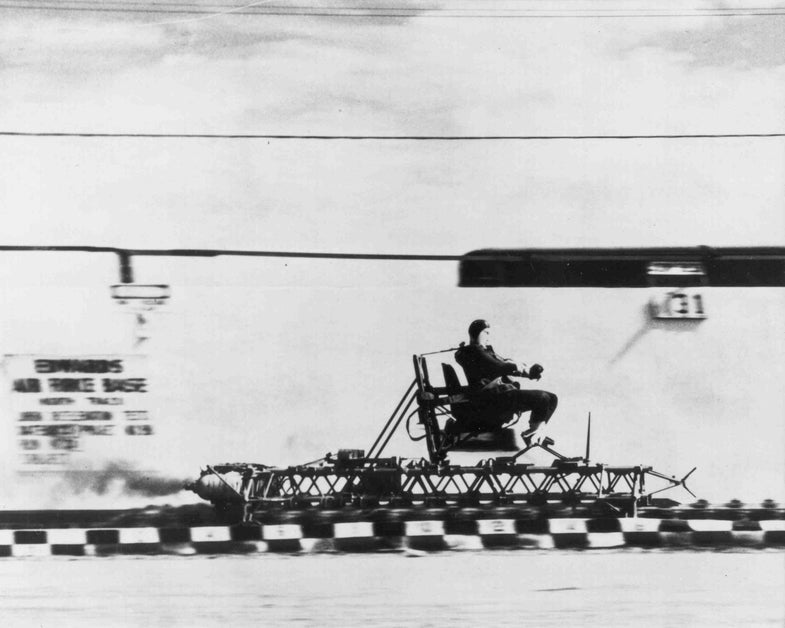 In the years after the Second World War, airplanes were starting to fly higher and faster thanks to new streamlined fuselages and powerful jet and rocket engines. But pilots weren’t getting any more robust; higher flight in faster airplanes meant more dangerous bail out conditions and harder crashes, which meant flying was an increasingly hazardous job. The disparity between powerful aircraft and human frailty presented a unique opportunity to study human tolerances to extreme environments, and that appealed to Air Force flight surgeon John Paul Stapp. In the name of pilot safety, Stapp strapped himself to a rocket sled and shot across the desert only to stop suddenly at the end of the track pulling upwards of 40 Gs. 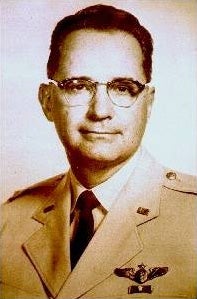 Stapp’s interest in human tolerance tests was first peaked when he witnessed ejection seat tests in 1946 at Wright Field. Ejection wasn’t a new idea, but it did raise some interesting biomedical questions. A pilot bailing out of his aircraft at high speed and high altitude would be hit with a blast of wind and a load of G-forces. What could be survive? Textbooks of the day put 18 Gs as the limit of human tolerance, but was that really the limit? And if it wasn’t, could there be a way to protect a pilot during a high speed crash? Deceleration tests would go a long way in answering these questions, and so that became one of Stapp research projects.

Stapp’s first tests took place on a 2,000-foot long track at Muroc (now Edwards) Air Force Base that had originally been built for American scientists to study the V-1 buzz bomb. By adding rockets to a sled, Stapp could accelerate down the length of the track to near crash speeds. A series of 45 clasping pairs of brake surfaces would stop the sled at the end of the track, mimicking what a pilot would experience when crashing at high speeds.

By June 8, 1951, volunteers had made 74 runs on the sled. Stapp himself was one of the most frequent riders, fracturing his wrist twice on more violent runs. But the sled at Edwards wasn’t enough. He wanted to try faster speeds and more violent decelerations, an opportunity he got when he was transferred from Muroc to the Holloman Air Force Base in New Mexico.

Stapp arrive at Holloman in 1953. There he developed, in cooperation with the Northrop Corporation, a far more powerful rocket sled he called Sonic Wind No. 1. This sled had a full propulsion section attached behind it and a water brake system at the end of the track; a scoop attached to the underside of the sled would dig into a series of dams placed between between the rails, absorbing the energy of the run and stopping the sled.

Strapped into an exact replica of a jet pilot’s seat, Stapp rode the Sonic Wind for the first time on March 19, 1954. Six rockets produced 27,000 pounds of thrust to propel the sled to a top speed of 421 miles an hour. It was a land speed record, and when the sled stopped Stapp was subjected to 22 Gs.

Gradually, more objectives were added to these test runs, including human tolerance to wind blasts. A sled run on August 20, 1954, had the sled’s speed increased to 502 miles per hour with Stapp exposed to the elements. He survived. 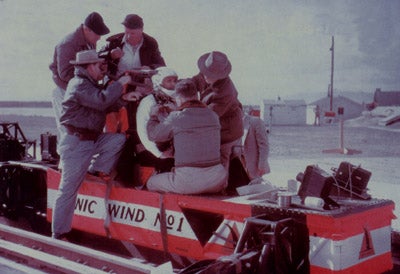 The Fastest Man on Earth

Stapp’s last sled run on December 10, 1954, was also his more noteworthy. Three more rockets had been added to Sonic Wind’s propulsion system for this run; the full cluster nine of solid fuel rockets could produce 40,000 pounds of thrust. Because there was no windscreen, Stapp’s arms and legs were secured to decrease the chances of injury from his limbs flailing in the wind. He wore a helmet and had a bite block in his mouth to protect his teeth.

Strapped in an unable to move, Stapp and his team waited for the clouds overhead to break. Stapp needed clear skies because part of the test involved photographing the run. High speed cameras on the ground were trained on the track, and a photographer in the back of a T-33 piloted by Joe Kittinger would capture the end of the run from above.

When the cloud broke, the test was on. The nine rockets behind Stapp came to life. In five seconds he reached 632 miles per hour, which is about Mach 0.9. Kittinger watched at the sled outstripped his T-33. Almost as suddenly as it started, the run ended. From the moment the scoops first dug into the water, it took just 1.4 seconds for the sled to come to a complete stop. This rapid deceleration translated to more than 40 Gs, making Stapp momentarily weigh 6,800 pounds as his body slammed forward. The force of the stop was the same that a driver would feel smashing into a brick wall at 120 miles per hour.

And then the sled was still. Stapp waited for emergency personnel to remove him from the seat and take him to hospital. His body was in shock from the extreme g-forces. All the blood vessels in his eyes had burst, rendering him momentarily blind; for a few nervous minutes didn’t know whether he would ever regain his sight. He had cracked ribs, both his wrists were broken, and the deceleration had taken a toll on his respiratory and circulatory systems. He was banged up, but in good spirits. Time Magazine subsequently named Stapp the “Fastest Man on Earth.”

Before he had fully recovered from his injuries, Stapp was already planning to add more rockets to the sled for the next test. He wanted to get it up to 1,000 miles per hour to go faster than the speed of sound, but the Air Force finally intervened. He was “grounded” from doing any more high speed research runs. His life and work were too valuable to risk on another high speed run.

Stapp’s rocket sled career might have been cut short but his results went far. He proved, by extrapolation, that a pilot could survive ejecting from an aircraft traveling 1,800 miles per hour at 35,000 feet. He also demonstrated that, with the proper restraints, a pilot could withstand up to 45 G’s in a crash. Jet pilots’ seats were subsequently strengthened to protect men from stronger impacts.

Stapp also set the record for the highest known G force ever voluntarily experienced by a human, which may not be an honour many strive to hold. He also sustained no serious lasting damage from the tests. Stapp died in 1999 at the respectable age of 89.