See Inside Your Cells In A Whole New Way 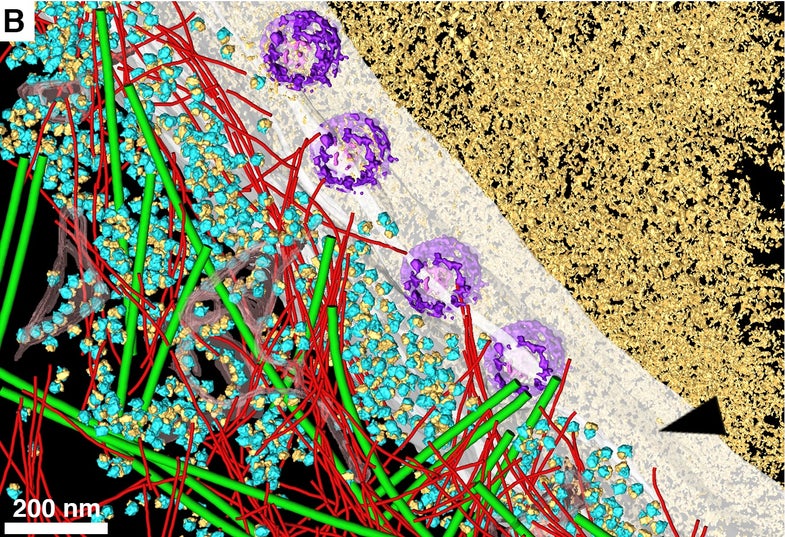 Much like a car, a cell wouldn’t function without all its parts. Unlike a car, though, scientists still haven’t been able to fully understand just how all the parts of cells fit together.

That’s mostly because even the most advanced imaging technology to date hasn’t given them a good enough look at the border between the nucleus and the rest of the cell. Now researchers from the Max Planck Institute of Biochemistry and the FEI microscopy company in the Netherlands have used cryo–electron tomography to take 3D images of the insides of cells to learn more about how they function as a whole. They published a study with their findings today in Science.

Cryo–electron tomography can snap images of cells down to the nanometer scale, but the specimens have to be frozen at extremely low cryogenic temperatures (below -238 degrees Fahrenheit). The researchers used liquid nitrogen to freeze HeLa cells, common in lab experiments despite their controversial origin (taken in 1951 from a cervical cancer biopsy of unwitting African-American woman Henrietta Lacks). Then they sliced them into thin just 200 nanometers.

To better preserve the cell structures, the researchers coated the sides of each slice with a thin layer of metal so that the focused beam of electrons needed to create the image, connected better with the surface and created clearer images. The electrons shot at the slices would bounce off and into a detector, generating an image of each tiny structure inside.

Using this advanced imaging technique, the researchers were able to analyze cells’ nuclear pore complexes, the holes in the outer envelop of the nucleus that allow important biological molecules to pass between it and the rest of the cell.

When the researchers looked at these pores at different phases in the cells’ developmental cycle, they realized that the size of the pores were the same within each cell, indicating that the size of the pores likely depends on the cell’s physiological phase, probably because the rest of the cell needs different amounts of information from the nucleus at different points in its life cycle.

The researchers believe this will be the first of many discoveries about the relationship between a cell’s form and function thanks to this advanced imaging technology.