Seeing a missile nose cone isn’t exactly a big deal these days. We have more impressive things that have returned... 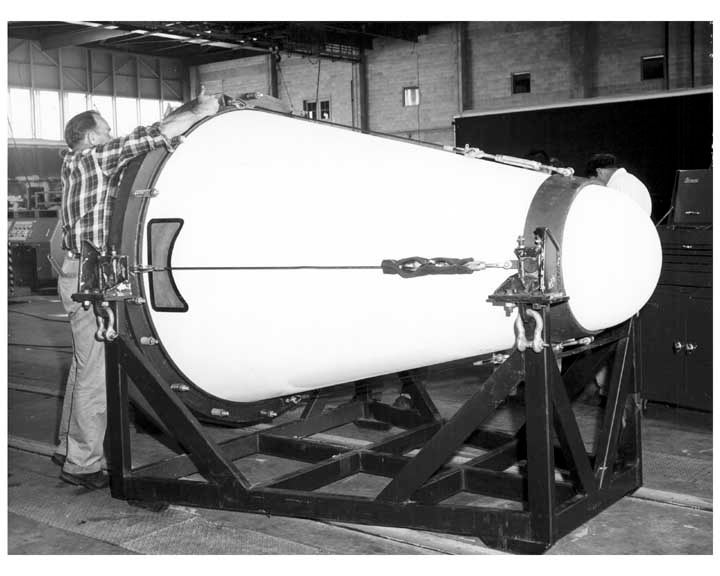 Seeing a missile nose cone isn’t exactly a big deal these days. We have more impressive things that have returned from space — like pieces of spacecraft that have spent years on the Moon — on display in museums around the country. But when President Dwight Eisenhower had a nose cone sitting in his office during a 1957 televised broadcast, it was a pretty big deal.

In the early 1950s, the US Army was looking at developing a 1,000 mile range missile. Eventually called Redstone, work on this missile fell to the Army Ballistic Missile Association, the group established in 1956 that was led by Wernher von Braun. And while the ABMA knew this missile was technically feasible, the group also knew that it came with significant engineering challenges that would need creative solutions. One challenge was protecting the warhead from atmospheric heating during reentry. 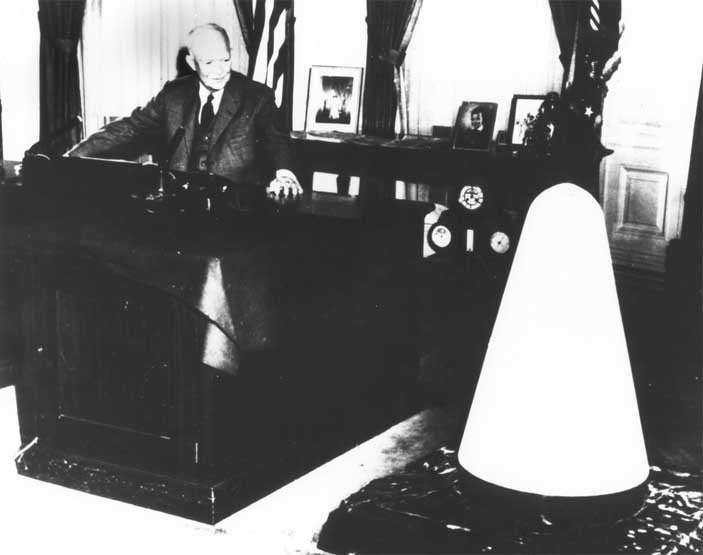 Eisenhower and the Nose Cone.

Members of the ABMA knew from the legacy of Second World War German rocket testing that a payload reentering from an altitude of about 107 miles melted as it fell through the increasingly thick layers of the atmosphere. The Redstone’s payload would be flying far higher than that threshold, reaching as high as 250 miles in flight. From that altitude, steel would melt during reentry. But that wasn’t the only thing challenging aspect of the flight. The Redstone’s payload wouldn’t be shot straight up and left to fall back down; it would be rocketing laterally across the globe at the same time. This high velocity compounded the heating problem.

The ABMA started by testing available materials and methods with jet burners to simulate the heat of atmospheric reentry. They focused on four main methods: ablation, which has external material burn away; heat sink, which has a material absorb more heat than can be reradiated into the atmosphere; radiation, which has the vehicle reradiate heat as it reenters the atmosphere; and transpiration wherein cool gasses ejected from the payload temper the effects of atmospheric heating. Each of these methods spare the warhead from the full heat of reentry.

Ablation proved to be the most promising method, and so the ABMA turned its attention to materials; the plastics, fibers, and ceramics that would burn away during reentry. The winning material was a mix of phenolic resin, fiberglass, and asbestos. This became the material of the warhead’s heat shield, and while lab tests confirmed it would work, the ABMA wanted to test it in an actual reentry scenario.

There were three reentry tests launched, though the last one on August 8, 1957, was the most significant and the biggest triumph of the program. A modified Redsone dubbed Jupiter-C was fitted with a one-third model of the nose cone. The Jupiter was a version of the Redstone the Army was developing in cooperation with the US Navy, but the partnership didn’t last. The Navy, unenthused at the prospect of storing the liquid fueled Jupiter missiles on submarines, opted instead to develop its own solid fueled Polaris missile. For this test, the missile was designated Jupiter to take advantage of that program’s higher standing while the C denoted it was a composite reentry test.

On this last Jupiter-C launch, the nose cone reached a peak altitude of 270 miles and was subjected to more than 2,000 Fahrenheit during reentry. But the nose cone survived and landed 1,150 miles downrange from its launch site. When the US Navy recovered it from the ocean (as seen in the video below) it became the first object ever to be retrieved that had been into space.

Three months later on November 7, that nose cone made its TV debut; it was on the floor in President Eisenhower’s office when he addressed the nation. “This object here in my office is an experimental missile — a nose cone. It has been hundreds of miles to outer space and back. Here it is, completely intact.” It was a clear illustration, Eisenhower said, that America’s military and technological strength “is not static but is constantly moving forward with technological improvement.”

Coming on the heels of Sputnik and Sputnik 2 both reaching orbit and a month before America’s first satellite launch attempt, the nose cone recovered from space was tangible proof of America’s technological abilities. It was a a symbol in the President’s attempt to allay the fears that had gripped the nation, assuring his people that America was well equipped “to bring near annihilation to the war-making capabilities of any other country.”

For a small nose cone, it carried a lot of weight.

Sources: The American Presidency Project; “History of the Jupiter Missile System” by Grimwood and Strowd; US Army. Video from Archive.org.