Early humans hooked up with other species a whole bunch 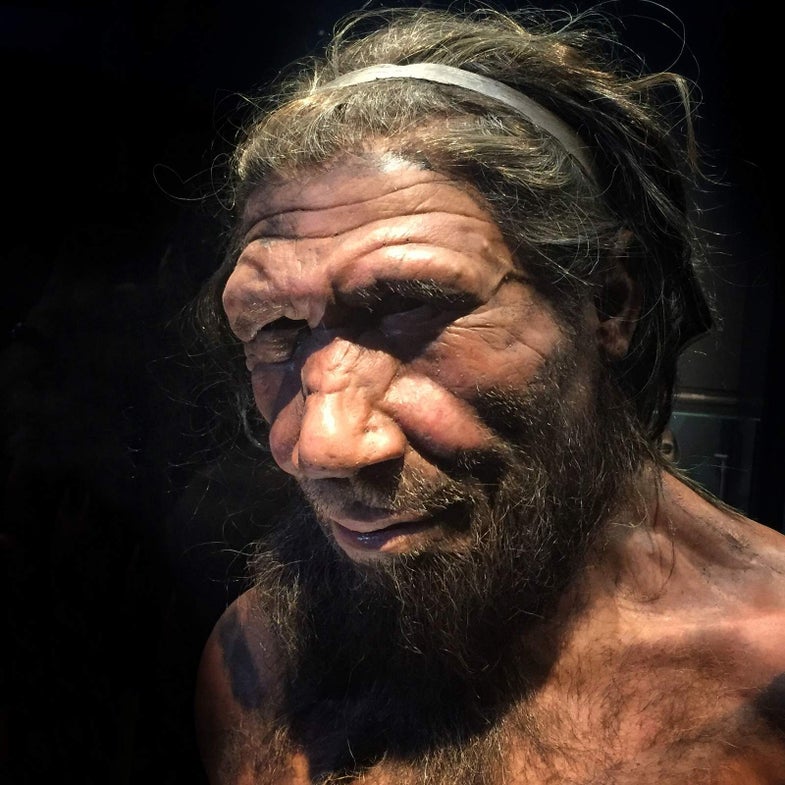 The story of how modern humans came to be is still complicated and murky, but there’s one thing that’s become very clear over the last decade of research: humans loved to get down, even with other species—that’s why nearly everyone whose ancestors migrated out of Africa possesses at least some lingering bits of Neanderthal DNA.

As it turns out, those experiences in interspecies mating were far from isolated one-night stands. According to a new analysis of gene ancestry data published Monday in Nature Ecology & Evolution, populations of humans and Neanderthals mated and procreated multiple times over during the 30,000 years when the two species overlapped. Our snippets of Neanderthal DNA are not the result of one-off hookups.

“The history of human-Neanderthal interactions is complex,” says Joshua Schraiber, a genomics researcher at Temple University and a co-author of the new study. “It wasn’t just one time that humans and Neanderthals ran into each other and interbred. They overlapped for tens of thousands of years, and multiple interactions occurred.”

Scientists first uncovered evidence that humans and Neanderthals had once interbred earlier this decade, thanks to new strides made in the genetic analysis of present-day human populations from around the world. But the low resolution of this data suggested humans had only interbred with Neanderthals in Western Asia once before splitting up and migrating throughout Eurasia.

More recent research indicates that modern-day humans living in East Asia typically possess about 10 to 20 percent more Neanderthal ancestry in their genes, which is way higher than the average 2 percent Neanderthal DNA typical in non-African humans. One hypothesis was that some populations more quickly purged out their Neanderthal DNA through negative selection because the associated traits didn’t suit their ways of life. Another more complex theory suggested that one older European population—”Basal Eurasians”—avoided breeding with other species of Homo, and that when this group met with other humans in the continent they watered down the Neanderthal genes. But none of those explanations really held up.

Schraiber, in collaboration with others, started developing a theory that hinged on a new method of identifying Neanderthal fragments in modern human DNA, and his lab began honing in on better specifying how Neanderthal DNA fragments were distributed through different European and East Asian populations.

Ultimately, through a combination of pen-and-paper mathematics and computer simulations that could better analyze data from the 1000 Genomes Project, Schraiber and his team found the evidence supported a model with multiple genetic mixtures of Neanderthal and human DNA, in both Europe and East Asia.

So if Neanderthals and humans bred frequently over such a long time, why does the former’s DNA comprise such a small portion of the modern day human genome? Schraiber thinks that, among many potential factors, negative selection definitely played a role in diluting Neanderthal genes over many generations. Unfortunately, the fractured array of current data we have makes it much more difficult to piece together a clear history just yet.

Schraiber is pretty open about the limitations of his own findings, and even cautions against outright buying into the new paper’s model. There’s significant room for error in accurately identifying DNA bases. And he says matings between the two species must have involved very closely related Neanderthals. When looking at fragments from another early human group, the Denisovans (Neanderthals weren’t our only special friends), researchers can clearly identify that the DNA came from different, distinct populations on different occasions. “However, the fragments we see from Neanderthals are consistent with coming from a single Neanderthal population,” says Schraiber. “This perhaps isn’t too surprising, because Neanderthals had very low genetic diversity. But it is definitely worth following up on.”

Iosif Lazardis, a genetics researcher at Harvard Medical School who was not involved with the new study, thinks the idea that the two populations mingled multiple times is quite plausible, since there is other research that suggests more than one episode of interbreeding between the two species. Like Schraiber, he doesn’t discount the role of negative selection in creating a big difference between East Asian and European genomes. “I think this study presents a challenge to archaeologists and geneticists who study ancient humans to go find more samples” of East Asian ancestry that could bolster evidence of multiple genetic admixtures. “It’s a long way from Africa to East Asia, and if the scenario proposed by the authors is correct, then such populations may be found somewhere in between, perhaps in Central Asia,” he says.

It’s clear at this point there’s no longer any reason to be shocked that different species of early humans got it on. And if the paper’s new findings hold up to scrutiny, we should probably get used to the fact that modern humans kept going back to Neanderthals to get lucky. We Homo sapiens have so firmly carved out our ecological niche that our closest living relatives are much more distinct from us than Neanderthals would have been (bonobos are great and all, but you definitely should not try to date one), so it’s impossible for us to imagine just how taboo their intermingling would have seemed.

“It’s just inherently interesting that anatomically modern humans and Neanderthals interbred,” says Schraiber. “I wonder what would happen if there were Neanderthals today?”

Correction: A previous version of this article mistakenly stated that certain populations had 10 to 20 percent Neanderthal DNA—in fact, they have 10 to 20 percent more than other populations, which is still a very small percentage. We apologize for this typo!