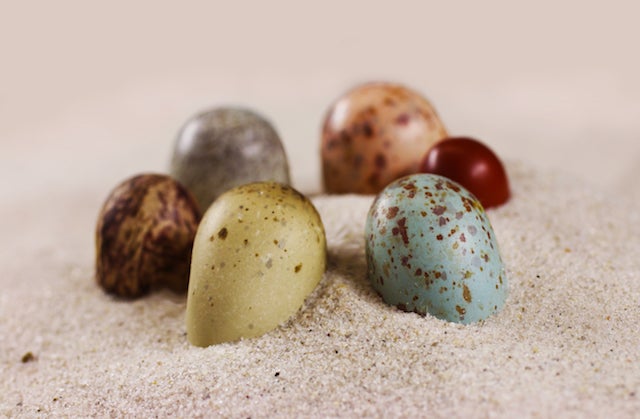 When it comes to egg art, modern birds have the market cornered. Turtles and lizards and alligators encase their spawn in plain white, while bird eggs appear in bright blues and browns and speckles galore. For a long time, scientists thought this colorful trait was entirely unique to modern avians. But our winged friends may have inherited this artistic ability directly from dinosaurs.

Colorful eggs evolved only once among dinosaurs, who then passed the trait down to their modern descendants, according to a paper published this week in Nature. Egg color popped up when dinosaurs started nesting above ground, much like many species of modern bird, the scientists found.

“It’s really an important contribution to the literature, it illustrates that the eggshell pigments evolved much earlier than previously thought,” says Daniel Hanley, a behavioral ecologist at Long Island University Post who was not involved with the new study.

Until recently, most scientists thought dinosaur eggs resembled plain old reptile clutches, and birds were the only creatures in evolutionary history with the ability to paint their offspring. In 2015, Jasmina Wiemann, one of the authors on the new study and a molecular paleo-biologist at Yale University, published a study that found traces of blue-green in the eggs of the extremely elegant oviraptors.

Next, Wiemann wanted to know “could egg color have a single evolutionary origin, or did [the trait] evolve two times or more times independently?”

To answer this question, Wiemann and her colleagues at the American Museum of Natural History collected 20 eggshell fragments from dinosaurs around the world as well as alligators and birds including chickens and emus. The scientists only used dinosaur eggs where they could be sure of what species it came from which greatly restricted their sample, says Mark Norell, chairman of the division of paleontology at AMNH and co-author on the new research.

In birds, all egg colors and patterns break down into just two pigments: biliverdin, which makes blue-green, and protoporphyrin IX, which makes brownish red. Wiemann and Norell used a technique called Raman microspectroscopy to find and measure the concentration of small amounts of these pigments in the dinosaur eggs to reconstruct their colors and patterns. This technique is highly sensitive and does not destroy the precious eggshell samples when analyzing them, says Norell.

Then, the scientists mapped each colorful egg onto a dinosaur family (also known as a phylogenetic) tree. They found colorful eggs appeared early in the ancestry of theropod dinosaurs, the family from which modern birds are descended, when dinos stopped burying or covering their eggs, says Norell. The timing suggests the ability to make a pigmented egg evolved only once, “and didn’t evolve near the ancestor of birds, and evolved far deeper in the dinosaur family tree,” Norell says.

“Once you build an open nest, you have the egg exposed to the environment, exposed to potential predators, to nesting parasites, to parents,” explains Wiemann, “[there’s a] selective pressure that favors the evolution of egg color.”

The eggshell resemblance could mean we can look to the lives of modern birds to “predict dinosaur ecology” in the past, says Hanley. “That would be super cool.”