What did dinosaurs eat?

Salad. And some meat. 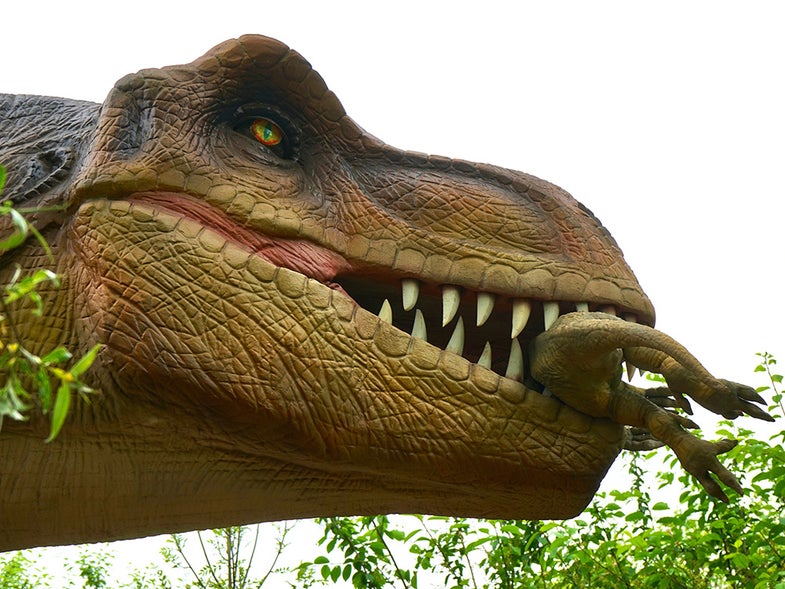 The Tyrannosaurus rex was a nightmarish lizard, a menacing meat-eater that chomped down on other dinosaurs like the Triceratops and Edmontosaurus with a bone-crushing bite. They likely even cannibalized members of their own species.

But what about the more than 700 other species of dinosaur that existed millions of years ago? For many of them, meat wasn’t on the menu. They ate salad instead. That’s according to Jordan Mallon, a paleontologist at the Canadian Museum of Nature, who says the vast majority of dinosaurs were actually herbivores, munching on plant matter rather than flesh.

“In any ecosystem, you have more herbivores than carnivores,” Mallon says. This applies to the landscapes of today—there are more deer than, say, wolves—and to ancient ecosystems. During his digs, he says, “I probably see six herbivorous dinosaurs to every one carnivore.”

And surprisingly, the bigger the dinosaurs were, the more likely they were to be vegetarian, he says. Take Sauropods, for example. This long-necked group contains the world’s largest dinosaurs—such as Argentinosaurus, the biggest land animal to have ever roamed the Earth, by some estimates—and they munched on little more than ancient plants like cycads, ferns, and ginkgos. A lot of them.

“They would have had to be shoveling in hundreds of pounds of food a day if not more in order to sustain their metabolisms,” Mallon says of Sauropods. “They were just raking in leaves.”

(Some of them also swallowed stones, which may have aided digestion by grinding up the plant material in their stomachs.)

That’s not to say that plenty of species weren’t feasting on flesh. Predators like Majungasaurus and Allosaurus, Mapusaurus and Giganotosaurus, along with other large carnivores, probably dined on other dinosaurs, Mallon says.

Related: When and how did dinosaurs go extinct?

“Most meat-eating dinosaurs were eating other dinosaurs because they were the dominant animal in the ecosystem … especially for the bigger dinosaurs, which would have only been able to sustain themselves on dinosaur meat,” he says. “Everything else was too small.”

There were, however, some exceptions. The Spinosaurus, easily recognizable by its sail-like spine, is believed to have been the largest carnivorous dinosaur. Yet it was pescatarian.

“We think there were at least a couple of dinosaurs like Spinosaurus that were fish specialists,” says Mark Norell, chairman of the division of paleontology at the American Museum of Natural History. “They had dolphin-like teeth and snouts,” he says, which are perfect for snatching up prehistoric sea creatures.

So if humans were around 70 million years ago, would we have been on the menu, too? Probably. Though it’s impossible to be sure, barring a real-life Jurassic Park, humans would likely be prey. After all, Norell says, carnivorous dinosaurs were not likely picky eaters.