Why do I feel dizzy after spinning?

Sometimes, it takes a while for your brain to catch up to your body. 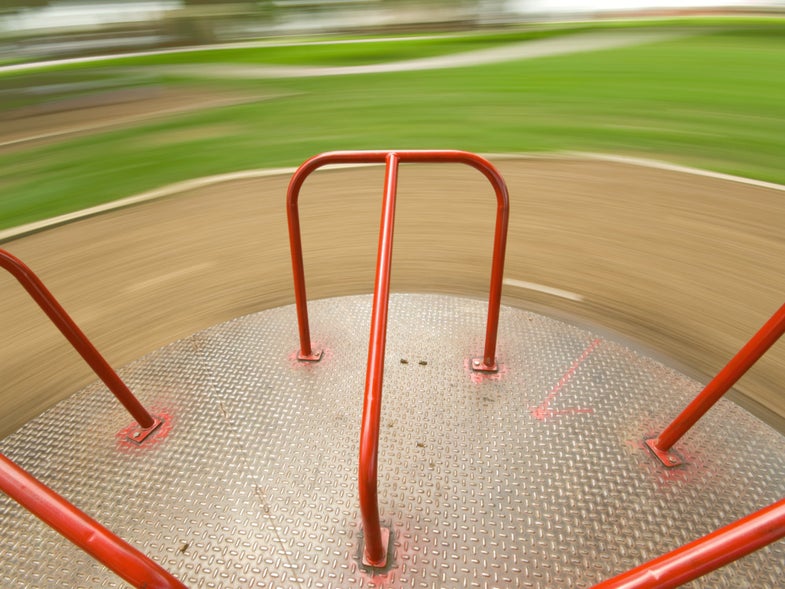 The feeling you get as soon as you step off a merry-go-round is a hard one to forget. You crash to the ground only to look up and watch the sky continue to spin. You’ve stopped moving, but this dizzying feeling continues. Why?

No matter what method you use to spin—run around rapidly in circles, whirl in an office chair, or spend some time on the merry-go-round with your friends—your body reacts in the same way.

When you spin around quickly, your eyes see a lot of different information in a very short time, which can be disorienting. But your body is ready for sudden changes like that, and it tries its best to keep its visual field looking normal. If what you saw started spinning with every movement your body made, the world would be a very befuddling place. In fact, it would be pretty hard to do anything.

The process that keeps you oriented doesn’t have much to do with your eyes at all. Instead, it all begins inside your ears. Way past the outer area that you can see, rests three semicircular canals (think elbow pasta shape). They are each situated at 90 degree angles of each other. The canals are lined with extremely tiny strands of hair. Inside each canal (where you would normally find the cheese in your elbow-shaped mac n cheese meal), is two layers of thick gelatinous fluid.

Scientists call them endolymph and cupula. As you move around, these fluids slosh inside the ear canals. That sloshing hits those itty bitty strands of hair, making them move back and forth. Those hair movements are key. The ear picks up on what direction the hair cells are moving and uses nerve cells to send a signal to the brain with all of that information.

Once you stop moving, the fluids stop sloshing and the hairs no longer pick up movement and that alert signal to the brain halts. However, that process is far from perfect. When you move really fast, like if you spin around in circles a bunch of times or spend far too long on a merry-go-round with your friends, that fluid in your ears swishes around at an even more rapid speed. That makes sense because you are spinning really quickly.

The problem comes when you stop. Your muscles are able to start and stop really quickly without any issues. But that fluid doesn’t work as fast. Even though you stopped, that fluid is still moving. And it takes some time for it to finally stop. While it’s still moving, those hairs are still picking up on the motion and sending signals saying, “I’m moving” to the brain. The brain receives that signal but at the same time knows the body is perfectly still. The resulting feeling? An extreme case of dizziness. Luckily, it’s only temporary.