Every work of art has its own microbiome. Most could use a probiotic. 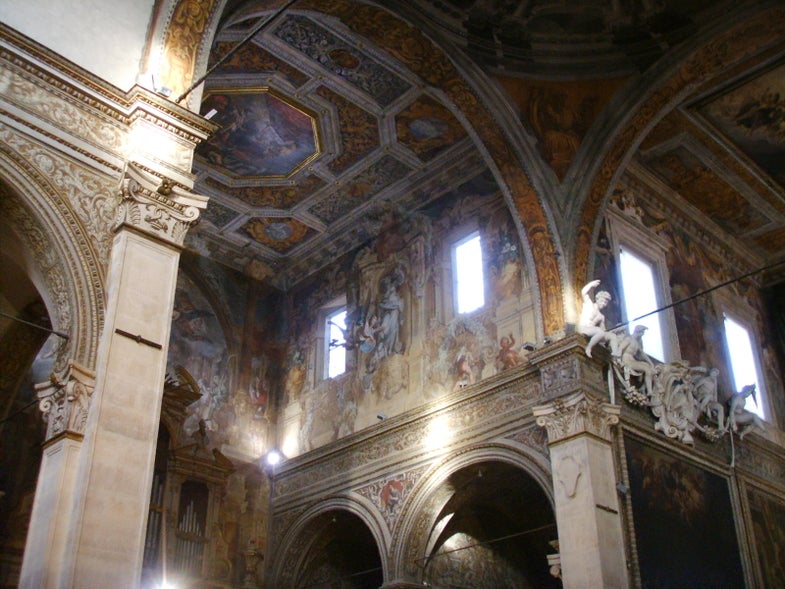 The church in Ferrara, Italy where microbiologists recently analyzed the fungus and bacteria on a historic painting. Sailko via Wikipedia
SHARE

There are a thousand things that can damage a work of art. As soon as oil paint sets, it’s subject to craquelure—the subtle cracking that lines Mona Lisa’s face like the bark of a tree. Improper installation has allowed the sun to sear frescoes, birds to defecate on statues, and water to snake its way to precious paintings. Even plastic art decays: old rolls of film turn to vinegar and PVC crumbles to synthetic dust.

In a new study in the open-access journal PLOS ONE, a team of interdisciplinary Italian biologists, architects, and engineers characterized another path of destruction: invisible invaders in the form of bacteria and fungi. With a wide array of scientific instruments, they analyzed the microbiome of Carlo Bononi’s 17th century easel painting, “Coronation of the Virgin.” The resulting paper identified potentially troublesome populations of Staphylococcus, Aspergillus, Penicillium, Cladosporium, and Alternaria—and a probiotic strategy that could restore the painting’s health.

Elisabetta Csselli, a microbiologist at the University of Ferrara and lead author on the study, is used to carrying out her research in hospitals, not churches. In 2016, she published a paper in PLOS ONE on the use of Bacillus fungi as a cleanser in hospital settings where drug-resistant bacteria are known to grow. To Caselli’s excitement, the strategy seemed to work. “More recently, we became interested in applying this approach also to other fields, as the remodulation of the microbiome could be… potentially useful in many settings,” she told PopSci via email.

That setting turned out to be a five minute walk from campus. In 2012, northern Italy suffered two earthquakes in nine days. Many of Ferrara’s buildings sustained structural damage, the church of Santa Maria in Vado among them. Bononi’s painting of the Virgin Mary being crowned on her ascent into heaven was removed from its previous spot in the ceiling and placed on the floor of the church, awaiting restoration ever since.

In 2017, Caselli and her team worked with the church to swab the painting so they could culture surface bacteria, and remove small samples (less than 4 millimeters squared) for chemical analysis. Both the front and back of the painting were covered in microbes, but the location of each class of miniature colonizer varied by pigment. Bononi appears to have derived his red and brown paints from soil rich in iron oxide. There, researchers found high concentrations of environmental yeasts and molds. Where Bononi painted with lighter colors like yellow, derived from lead tin, and pink, from a mixture of earth and lead white, Cladosporium spores were thriving. Alternaria, meanwhile, was found only where the painting touched the ground.

Other studies have classified the organic materials moving across the surface of frescoes, murals, and statues, but the authors say this new paper is among the first to look at the microbiome of an easel painting. It also stands alone in proposing a radical bioremediation solution, adapted from healthcare and environmental settings. “One of the purposes of our study was to understand whether there are some beneficial microbes that can be used to fight the ‘bad’ ones, developing the general idea of ‘balance’,” Caselli said via email. “This has [worked] for the human body, but in our opinion it is a general rule, potentially applicable in many fields.”

In the lab, the researchers were able to show Bacillus had a powerful effect on other organisms living on the canvas. It inhibited growth in every single identified species of bacteria and fungi—at least in the context of the small extracted samples. Before the entire “Coronation of the Virgin” or any other work of art can be treated with a probiotic, more research must be done to ensure there’s no risk of damaging the canvas. But if all goes well, this could be another tool for preservationists in their unending fight against entropy.