A universe of emotion. 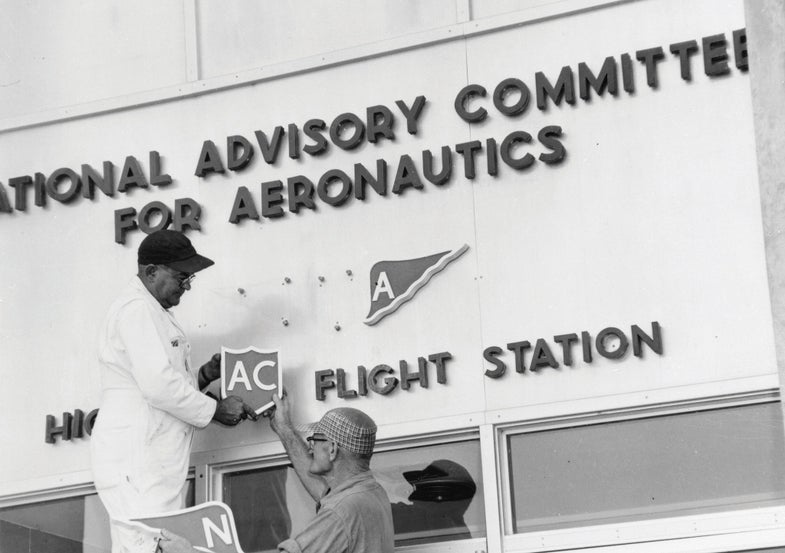 Workers replace the NACA logo with the NASA logo on October 1, 1958. NASA on the Commons/Flickr
SHARE

On October 1, 1958 NACA (National Advisory Committee for Aeronautics) formally turned into NASA (the National Aeronautics and Space Administration). The formal opening capped nearly a year of government negotiations as the United States started its push to catch up to the USSR in the early days of the space race.

In the next six decades, the government agency went through triumphs, tragedies, massive exploratory undertakings, and new periods of international cooperation. It’s still going strong today, with 38 current aeronautic and aerospace missions from the recent launch of the Parker Solar Probe to the ongoing Voyager crafts launched in 1977.

We asked you what you thought of NASA, 60 years after its formation. Here are some of your responses.

Several people reflected on their childhood memories of NASA, and how its programs shaped their lives—even indirectly.

#NASA got me in touch with my curious side, and made little-me eager to learn more. I remember being allowed to stay up late for shuttle & rover launches, and seeing updates on hubble (and the amazing pictures).
To this day I still lug out my telescope, in awe of whats out there. https://t.co/qUyqVCr2iZ/

“NASA had and does have a huge impact in my life. NASA inspired me to become an engineer.” -Jairo Chauca—24

NASA is turning 60 on October 1! Tell us what @NASA means to you for a chance to be featured in Popular Science: https://t.co/7P36xaUYPa/ pic.twitter.com/ncYWjXqWOK

“NASA was a household word when I was growing up. It is synonymous with the best humankind can achieve.” -Steven Gil—47

Since NASA is a government entity, politics and the current administration did come up in the responses, with some mixed reactions:

“I think it is fantastic that Trump is putting this innovative program as a priority. I’m excited to see what we do next.” Elizabeth Baamade—34

“I hope NASA resists the pressure from the White House to curtail/limit its educational outreach. K-12 needs to look up at the stars with the same encouragement as we adults had as kids. Reaching for the stars takes a village.” -Kristina Ward—45

For the most part, our readers seemed to view NASA with a lot of hope, seeing it as an inspirational force for the future.

“NASA makes me think of the unknown and therefore is extremely exciting! Its purpose is to continually learn and explore, which is something we should all strive to do.” -Allison Perry—36

“When I think of NASA, I think of numerous opportunities for our future. There is a lot of hope and imagination to accomplish what they want to accomplish.” -Alexander Gil—15

“I think NASA wants us to extend our limits and reach for the sky.” -Andy Chauca—17

Responses have been edited for clarity. If you’d like to share your thoughts on NASA with us, please fill out this form.