Like other animals, humans have a breeding season—and it’s right now

‘Tis the season for conception. 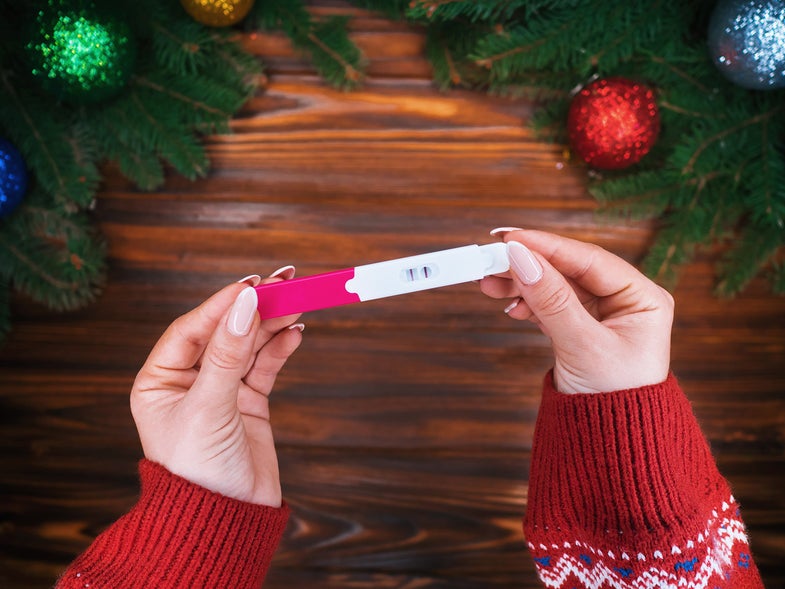 Does it ever seem like you’re invited to an awful lot of summer birthday gatherings? For good reason. In the United States, most births occur between June and early November. Count back nine months, and you’ll see that places most conceptions in the fall and winter.

What’s going on? Is the crisp autumn air, or the joy (or anxiety) of the holiday season, triggering more unprotected sexual intercourse? Or is it something else entirely?

It turns out reproduction is seasonal across all living organisms, from plants, to insects, to reptiles, to birds and mammals—including human beings. The ultimate explanation for this phenomenon is an evolutionary one.

Earth’s environment is seasonal. Above or below the equator, the year is structured by the winter, spring, summer, and fall. In equatorial regions, the wet and dry seasons punctuate the year. Organisms have evolved strategies to reproduce at the time of year that will maximize their lifetime reproductive success.

Humans are no exception and maintain this evolutionary outcome: birth seasonality. Researchers, including us, have recently been working to understand more about why births are seasonal because these patterns can have a big impact on childhood disease outbreaks.

Tracking birth peaks across the globe

The first studies demonstrating human birth seasonality date back to the early 1800s.

In some countries, local customs can explain birth seasonality. For example, in the 1990s, researchers showed that the traditional July-August wedding season in Catholic communities in Poland resulted in lots of births in the spring. But wedding season does not drive birth seasonality everywhere, and there is only a small correlation between weddings and births 9 to 15 months later in most locations. Thus, nuptial beds are not the full story.

Globally, popular birthdays follow a similar pattern with peaks occurring earlier in the year the further north you get from the equator—for instance, Finland’s is in late April, while Jamaica’s is in November. And in the U.S., states further south, like Texas and Florida, experience birth peaks that are not only later in the year, but also more pronounced than those seen in the North.

So what influences conception?

Research shows that the seasonality of births correlates with changes in local temperature and day length. And regions with extreme temperatures typically have two peaks in births every year. For example, data from the early 1900s showed two pronounced birth peaks per year in West Greenland and Eastern Europe.

Rural populations tend to have a more dramatic seasonal birth pulse than urban populations, probably because country dwellers may be more subject to environmental conditions, including changes in temperature and day length. Environmental factors like these could influence human sexual behavior.

Additionally, as in other animals, these environmental changes could drive seasonal changes in fertility. This means that, rather than just an increase in frequency of sexual intercourse, female and/or male fertility may change throughout the year, as an endogenous biological phenomenon, making people more likely to conceive at certain times—with the prerequisite of sexual intercourse, of course.

Biologists know that the fertility of non-human mammals is influenced by day length, which may act like a reproductive calendar. For example, deer use the shortening days of autumn as a signal for timing reproduction. Females get pregnant in the fall and carry their pregnancy through winter. The goal is to give birth at a time when plenty of resources are available for newborns—being born in springtime is evolutionarily beneficial.

So animals with long pregnancies tend to be short-day breeders, meaning they only breed in the short days of autumn and winter; they’re pregnant through the winter and give birth in spring. Whereas animals with short gestation periods are long-day breeders; they conceive in the long days of spring or summer and, because their pregnancy is short, have their young that same spring or summer. Many species only mate and are only capable of getting pregnant during a specific time of year—those long or short days, for instance—and the length of day itself directs their hormones and ability to conceive.

Humans may not be so different from other mammals. Day-length has the potential to influence human fertility and it does seem to explain the patterns of birth seasonality in some places, but not others. In addition to the length of day, researchers have shown that social status and changes in the standard of living also affect birth seasonality. There seems to be no single driver for birth seasonality in people, with an array of social, environmental and cultural factors all playing a role.

What does birth season have to do with disease?

Forest fires require fuel to burn. After a big fire, kindling must be replenished before another fire can spread.

Disease epidemics are no different. Childhood infectious diseases require susceptible children for a pathogen to spread through a population. Once children are infected and recover from diseases like polio, measles and chickenpox, they are immune for life. So for new epidemics to take off, there must be a new group of susceptible infants and children in the population. In the absence of vaccination, the birth rate in a population is a major determinant of how often childhood disease epidemics can occur.

In humans, the average birth rate is extremely important for understanding disease dynamics, with changes in birth rate influencing whether an epidemic will occur every year, or every few years, and how big an epidemic can be. For instance, polio epidemics in the first half of the 20th century resulted in many thousands of children paralyzed by polio each summer in the U.S. The size of polio outbreaks was dictated by the birth rate. Because of this, polio outbreaks became more extreme after the World War II baby boom, when the birth rate increased.

Similarly, the timing and strength of birth peaks also affects the length of time between epidemics. Importantly, regardless of how often an epidemic occurs—like births—it is always seasonal. And births have been shown to directly alter the seasonal timing of viral outbreaks in children.

There is one thing all researchers in this field agree on: People are starting to lose birth seasonality throughout the Northern Hemisphere. (Due to a lack of data, it is currently unknown what is happening in countries south of the equator, such as those in Latin America and Africa.)

There are two pieces of evidence to support this. First, the strength of the birth pulse—from June to November in the U.S.—has been decreasing for decades; and second, locations that had two birth peaks per year now only have one.

This loss of birth seasonality may be partially due to social factors, such as pregnancy planning and the increasing disconnect humans have with the natural environment and, therefore, the seasons. The root of this change is likely tied to industrialization and its downstream societal effects, including indoor work, fewer seasonal jobs, access to family planning, and modern housing and artificial light that obscures the natural day length that could influence fertility.

Whatever the cause of birth seasonality, one thing remains clear, at least here in the U.S.—right now remains the prime time for conception.

Micaela Martinez is an Assistant Professor of Environmental Health Sciences at Columbia University Medical Center, and Kevin M. Bakker is a Research Fellow in Statistics at the University of Michigan. This article was originally featured on The Conversation.