Kepler and Dawn guzzled through their precious gas for similar reasons. 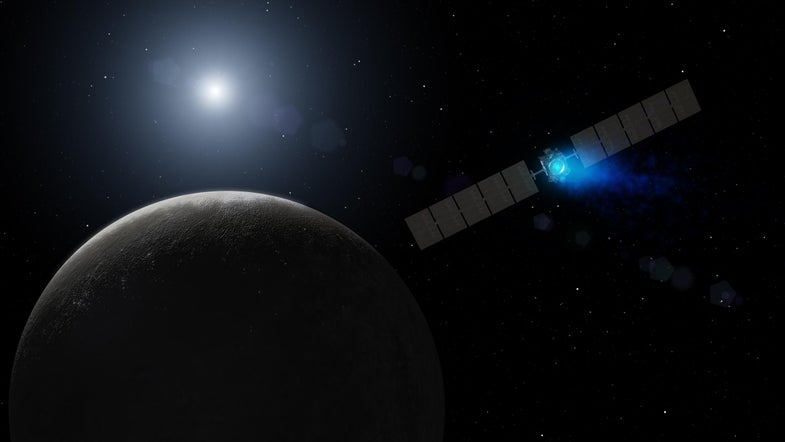 Late Wednesday night, the Dawn spacecraft skimmed 22 miles above the pockmarked surface of Ceres, halfway between Mars and Jupiter. It fired its thrusters gently, but frequently as it flew, adjusting its winglike solar array whenever the dwarf planet’s gravity caused one to dip. Then, without warning, the next pulse sputtered and nothing came out. Unable to square its panels with the sun, Dawn dropped into safe mode and went dark. Its support team, who by pure coincidence happened to be on duty, immediately suspected the 11-year mission was over.

“At that point, we were practically running on fumes,” says Marc Rayman, Dawn’s chief engineer for NASA’s Jet Propulsion Laboratory.

The fact that Dawn’s tank ran dry just two days after the exoplanet-hunting Kepler telescope made similar headlines came as a surprising, but not shocking coincidence, as both teams had been aggressively managing their dwindling supplies for months. While the two spacecraft worked in different regions of the solar system, the arcs of their lives—and deaths—are similar. Each faced a decade-long struggle against the inevitability of parts breaking down, supported by a team of engineers forced to balance the same scarce resources and handicapped by the same imperfect design feature.

Both machines charged their batteries by solar power, so the limiting factor was their maneuverability. To stay pointed at scientific targets and to rotate toward Earth to beam that knowledge home, the spacecraft used two strategies. Most of the time they relied on “reaction wheels,” disks that would spin up in one direction to twist the craft the other way. But occasionally, in order to adjust the ever-spinning wheels without changing orientation, the spacecraft would use hydrazine fuel to fire thrusters. Charlie Sobeck, the system engineer for Kepler at NASA’s Ames Research Center, likens the setup to a hybrid car. “Usually you use the electric engine,” he says, “but occasionally the battery goes dead and the gas engine has to come on and power up the battery.”

Dawn and Kepler launched in 2007 and 2009 respectively with four wheels each (one for each axis of rotation and one backup) and dozens of pounds of fuel. Smart money would have been on the hydrazine as the limiting factor, but as reaction wheels mysteriously started to fail—first one on Dawn in 2010, followed by one of Kepler’s in 2012—the engineers realized they faced an unexpected challenge. They could compensate for missing wheels with extra use of thrusters, but each firing brought the end of the missions a little closer.

Neither Rayman nor Sobeck knows exactly what went wrong with those wheels. Possibilities range from poor lubrication to internal static electricity shocks leaving tiny craters in their bearings. With no deep-space mechanics to call on, they had to fly as best they could with the broken parts. A naive choice might have been to accept shorter timelines and navigate exclusively by the less-efficient thrusters, but in both cases, engineers got creative and found alternative options.

When a 2013 breakdown of Kepler’s second disk ended its primary mission, its team figured out a way to turn the sun into a virtual third wheel to complement the remaining two. Light exerts the slightest of pushes, and by facing directly toward the sun the spacecraft found just the right angle to stay balanced. The new flying mode was slightly more inefficient from a hydrazine perspective and restricted observations to certain bands of sky, but there are stars everywhere. The resulting K2 mission went on to add more than 350 new exoplanets over five years to the primary mission’s discovery of thousands. “We had not expected that there was going to be a two wheel solution,” Sobeck says, “but it turned out to be very, very effective.”

Unlike Kepler, the dominant force on Dawn was a destabilizing one. After exploring the second largest object in the asteroid belt, Vesta, from 2011 to 2012, it still had two wheels spinning. Rayman knew that he’d need the aging reaction wheels to keep the unstable pull of Ceres’s gravity from tugging Dawn into a tumble, so he turned them off and navigated to the second destination mainly on hydrazine. “We accepted that we had this significant vulnerability,” he says. “We had to carefully manage [the wheels’] lifetime.” Dawn spun the wheels back up in December 2015 for smart navigation during low flybys.

Dawn’s buzzing around Ceres continued until Wednesday—despite the loss of the third wheel last year—solidifying its legacy as a sci-fi inspired explorer of uncharted worlds. On top of boasting an “ion engine” popularized by Star Wars and Star Trek, Dawn became the first spacecraft to orbit one extraterrestrial body, and then take off and hop to another.

Even with meticulous shepherding, the hydrazine onboard both crafts could aid the ailing reaction wheels only so far. The pressure in Kepler’s fuel line plummeted in early July, so Ames engineers shut the machine down to preserve the remaining drops for what they thought would be their final data download in August. “Many of us thought it was a 50-50 gamble whether we’d be able to do it,” Sobeck recalls. They successfully recovered that information and even squeezed in one final observation session before the hydrazine tank emptied completely in mid-October. Now Kepler awaits one final sleep command. Dawn remains completely unreachable. Unable to stabilize itself, the spacecraft has likely entered a slow, stately tumble that will continue around Ceres for decades to come, according to Rayman.

While NASA hasn’t been able to nail down the specific reasons why so many of Kepler’s and Dawn’s wheels failed, they’ve taken steps to improve the technology for future spacecraft. The wheels for both missions came from the same company, UTC Aerospace Systems, which supplied a similar model to Japan’s asteroid-hopping Hayabusa—another mission that overcame wheel breakdowns and orientation challenges. So while Kepler and Dawn dying within two days of each other is a wild coincidence, the fact that they both ran out of fuel together may not be entirely random. Rising internal temperatures meant that Kepler’s days were numbered regardless of fuel resources, but Dawn remained in otherwise excellent health and could have potentially continued operations.

UTC Aerospace Systems referred inquiries back to NASA, but Rayman says that other wheels from the same contractor have worked “just fine” and that the reaction wheel product line of Dawn and Kepler is no longer available.

Although the reaction wheels proved to be the duo’s Achilles heel in this specific case, Rayman praises the technology generally, pointing to Cassini as an example of a spacecraft whose wheels aimed it “beautifully” for nearly 20 years. Sobeck says that something has to break eventually, and these finicky gyroscopes can often be the first critical part to go. Most components don’t move much, but reaction wheels must spin thousands of times per second for years on end—so any imperfection can quickly produce catastrophic amounts of friction and heat.

Thanks in part to each team’s on-the-wing MacGyvering, the 500-million-dollar Dawn outlasted its primary mission by three years, and the 600-million-dollar Kepler beat expectations by six. Neither performance surprises Rayman, who suggests the reason why NASA spacecraft so often become overachievers comes down to economics and good engineering. “If you’re committing hundreds of millions of taxpayer dollars,” he says, “for let’s say an 8-year mission, you don’t design it so that everything is going to fail at 8.01 years.”

Rayman says he would love if the two missions could continue, but waxes philosophical about how lucky the community is to have had them for so long. He compares the situation to receiving 1,000 dollars a day for a decade, and then this week the windfalls suddenly cease. “You might think, ‘well gosh, I want a thousand dollars today, too,'” he says. “But the other way to look at it is, ‘look how rich I am.’ Kepler and Dawn both returned fabulous riches for a wonderfully long time.”