Earth life: an early arrival at the party 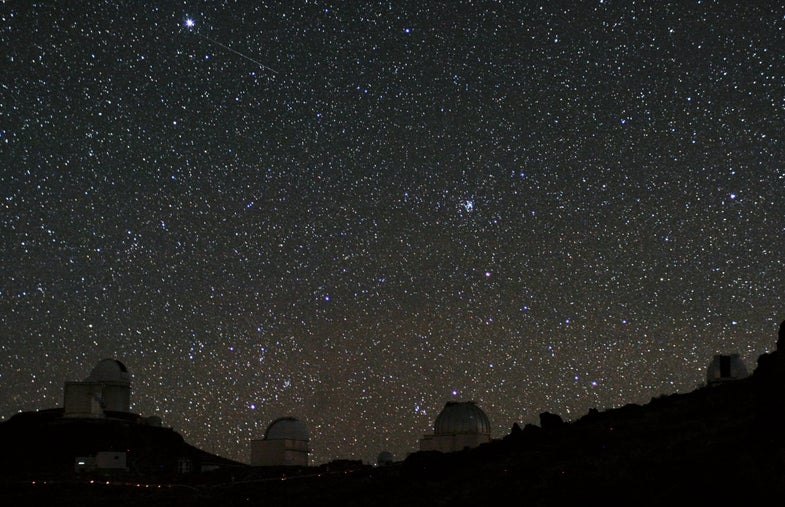 For centuries, philosophers and scientists have wondered about the possibility of habitable planets outside the Solar System. Today, this idea is more than speculation: many hundreds of exoplanets have been discovered over the last couple of decades, by astronomers all over the world. Various different techniques are used in this search for new worlds. In this unusual photograph, telescopes using two of these methods, the ESO 3.6-metre telescope with the HARPS spectrograph, and the space telescope CoRoT, have been captured in the same shot. The photograph was taken by Alexandre Santerne, an astronomer who studies exoplanets himself. The High Accuracy Radial velocity Planetary Search (HARPS) spectrograph, the world’s foremost exoplanet hunter, is an instrument on ESO’s 3.6-metre telescope. The open dome of this telescope can be seen on the left of this image, behind the angular enclosure of the New Technology Telescope. HARPS finds exoplanets by detecting small changes in the motion of a star as it wobbles slightly under the gravitational pull of the orbiting planet. This is known as the radial velocity technique for finding exoplanets. The faint trail of light high in the sky in this 20-second exposure is not a meteor but CoRoT, the Convection Rotation and planetary Transits space telescope. CoRoT searches for planets by looking for the dimming of light from a star which occurs when a planet passes in front of it — the transit method. The space telescope’s location above the Earth’s atmosphere improves the accuracy of its observations by removing the twinkling of stars. Potential planets found by the transit method are confirmed using complementary techniques such as the radial velocity method. Indeed, on very the night that this photograph was taken, HARPS was being used to follow up exoplanet candidates detected by CoRoT! In November 2012, CoRoT unfortunately suffered a computer problem, meaning that — although it is still functioning — it can no longer retrieve data from its telescope (see the news on the CoRoT website, or for example this Nature News article). The CoRoT team have not given up though, and are working to revive the systems. Whether or not CoRoT can be revived, there is certainly no doubt that the mission has already been a great success! The spacecraft has doubled its originally planned mission lifetime, and was the first spacecraft to discover an exoplanet using the transit method. CoRoT has made great contributions, both to the search for exoplanets, and to the study of the interiors of stars through the field of asteroseismology. The search for exoplanets helps us understand our own planetary system, and may be the first step towards finding life beyond Earth. HARPS and CoRoT are just two of the many exciting instruments developed to assist astronomers with this search. Alexandre submitted this photograph to the Your ESO Pictures Flickr group. The Flickr group is regularly reviewed and the best photos are selected to be featured in our popular Picture of the Week series, or in our gallery. In 2012, as part of ESO’s 50th anniversary year, we are also welcoming your historical ESO-related images. Since submitting the photo, Alexandre has also become an ESO Photo Ambassador. Links This photograph, with annotations, on Alexandre Santerne’s Flickr photostream Alexandre Santerne’s Flickr photostream The “Your ESO Pictures” Flickr group The "Your ESO Pictures" announcement ESO Photo Ambassadors.
SHARE

The world is in a tizzy over the mysterious fluctuations astronomers are seeing in light from a distant star. While those variations could turn out to have a perfectly non-alien explanation, the excitement over them shows just how badly we want there to be other civilizations in the universe.

Now, a study published this week in Monthly Notices of the Royal Astronomical Society, suggests that our loneliness is only temporary. If human civilization manages to hang on for several billion years (unlikely, but we’re an optimistic bunch) then we might just see other planets with other civilizations.

The researchers, from NASA’s Space Telescope Science Institute (STScI), looked at the data from telescopes like the Hubble and Kepler to get a better idea of how galaxies, planets and solar systems form. Using those observations and computer models, they calculated that Earth is only in the first 8 percent of all Earth-like planets that will ever form. That’s right, 92 percent of Earth-like (a.k.a. habitable, with liquid water on the surface) planets haven’t even been formed yet.

“Our main motivation was understanding the Earth’s place in the context of the rest of the universe,” author Peter Behroozi said in a statement “Compared to all the planets that will ever form in the universe, the Earth is actually quite early.”

Because it is so early, the researchers think it is highly unlikely that we are the only planet that will ever develop intelligent life. In the paper, Behroozi and his co-author, Molly Peeples, write, “assuming that gas cooling and star formation continues, the Earth formed before 92% of similar planets that the Universe will form. This implies a 8% chance that we are the only civilisation the Universe will ever have."

Those are pretty good odds that we aren’t alone. We might just need some patience to finally make first contact.