You don’t want these parasites to go extinct 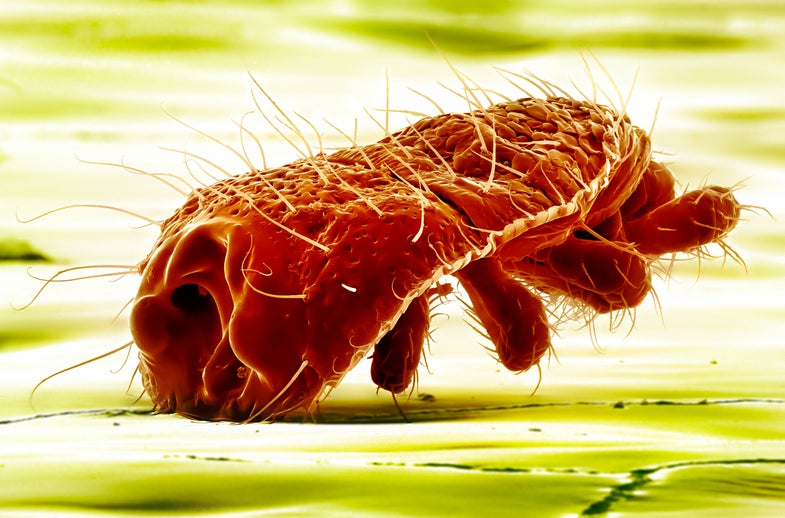 Macro shot of a parasite in the human body.
SHARE

Humans might fantasize about a world without ticks, fleas or giant kidney worms. But parasites connect food webs and serve vital purposes in every ecosystem. And scientists aren’t really sure what would happen if we lost them.

Biologist Colin Carlson was cooking pancakes with a parasitologist friend when they started talking about the effects that climate change will have on parasites. She thought it would be impossible to track down enough specimens for a comprehensive scientific study. Carlson took that as a challenge, and teamed up with Anna Phillips, a zoologist at the Smithsonian Museum of Natural History, and 16 other scientists from eight different countries. They created a massive database of over 100,000 kinds of parasites, then whittled down their study to around 50,000 species. By tracking how these blood-suckers, stomach-dwellers and kidney-eaters are moving and disappearing as the climate changes, Carlson and his team predicted how parasite populations will shift as this process continues. They found that a third of all parasites face a risk of extinction.

It’s difficult to predict how climate change will alter ecosystems by 2070. Most climate models agree until the 2030s, then temperatures increase at different speeds and forecasts diverge. But even in the best-case scenario, Carlson says, parasites will face some serious reshuffling.

Critters that currently live in warmer climates will move up north—which means more parasites may move up into the U.S. and Canada. It’s not clear how parasites that evolved in one environment will behave in a different place. But the fact that they’re likely to have fewer natural predators and less competition for the resources they require doesn’t bode well. “I think this is sort of the big unknown,” says Carlson. “A new wave of invading parasites will be entering.”

And while some parasites are set to stake out new territory, a wide range of species face threats of outright extinction from two sources: the death of their hosts and the changing base habitat. Most parasites spend at least part of their lives in an open environment, often as larva. They swim around in streams or swamps, which makes them vulnerable to changing climates.

The researchers found that parasites affecting humans were as likely to face extinction as those that target other species. However, there was one group of parasitic worms—Acanthocephla—that faced fewer threats than the other groups. These worms don’t usually infect people; their specialty is fish, amphibians, invertebrates, birds and other mammals. The researchers weren’t sure exactly why these wrigglers seemed to fare better than other parasites in the models—they may just be geographically lucky. But co-author Anna Phillips says that this strange exception to the rest of the study brought up an important point for her. “We wanted to address parasite diversity on the whole, not just what affects humans,” she says. Scientists estimate that 86 to 99.999 percent of species remain undiscovered, and parasites aren’t the most glamorous organisms to put your name on. Extinctions will affect ecosystems that we do not yet understand, which makes it impossible to know how other creatures will be impacted. Even for species we’re already familiar with, the domino effects remain unclear.

For example, take a pest that is currently plaguing the Northeast—the deer tick, which spreads Lyme diseases and other nefarious infections. Its suitable habitat is actually set to increase by 213 percent by the 2080s, according to a 2005 study. Scientists don’t know what effect that spread will have on the ants, spiders, wasps and birds that eat the ticks (and the things that eat them), or the deer and humans that suffer in their wake.

The threat level of each known species is now in a public database. Carlson would have met a dead end soon after that pancake breakfast without the help of museum collections like the U.S. National Parasite Collection, which has been built over hundreds of years. “The researchers in 1892 couldn’t have fathomed the things that we are doing with ecological modeling today,” says Phillips. “We can’t imagine what we’ll be using the specimens for in the future.”

Scientistific studies usually end with a plea for more research. But in this case, the unknowns so outweigh the certainties that trying to predict how the natural world will respond to this loss left the scientists grasping for words. “The impact of losing these parasite species to extinction—we don’t know what that will be,” says Phillips. “It’s really difficult to predict with even of the most optimistic of scenarios what our landscape of biodiversity will look like in 2070.”