How to speak city pigeon

Are they talking about us? Rosemary Mosco has the answers. 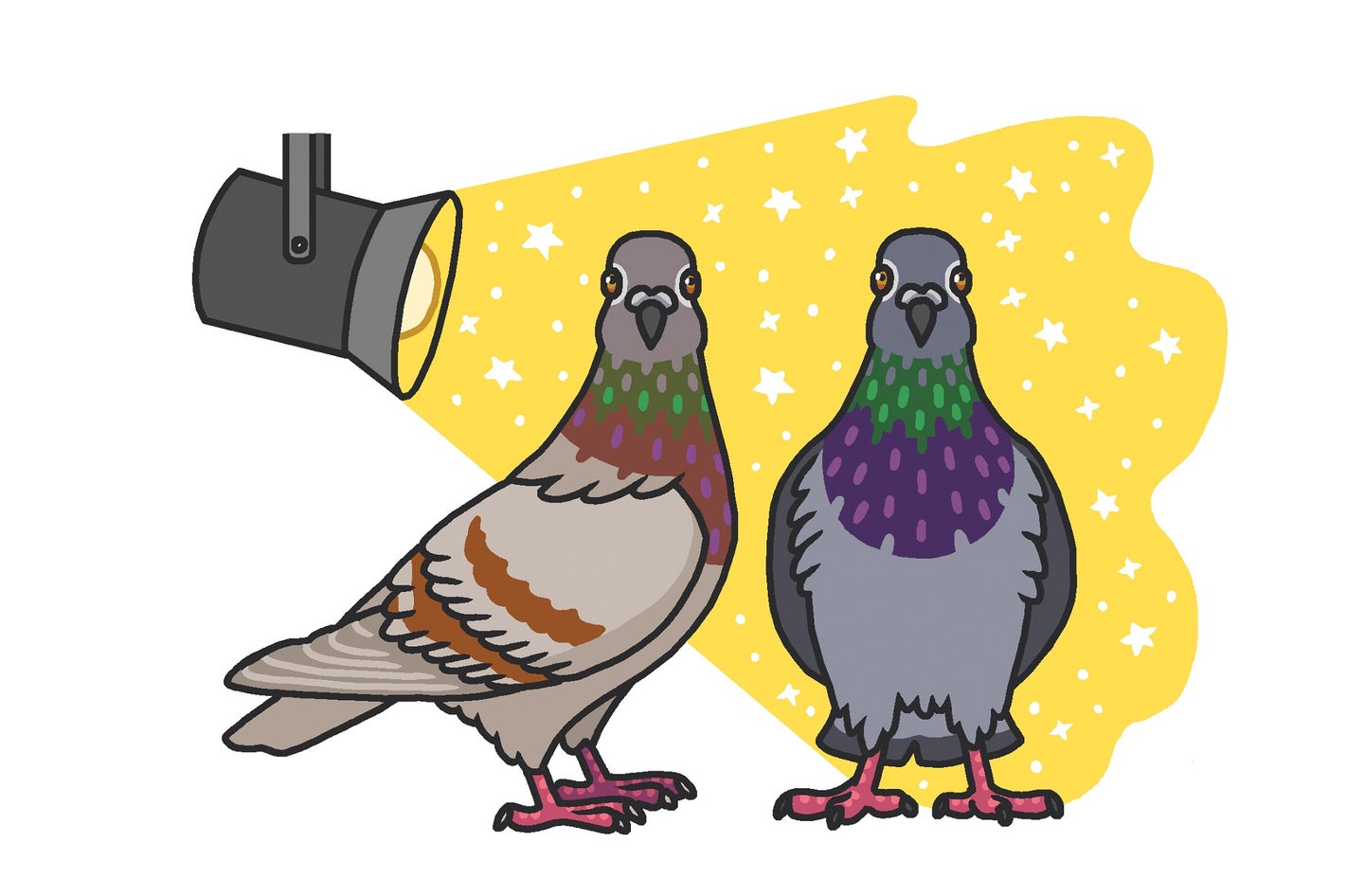 The world is a pigeon's stage, and you're just an extra. Rosemary Mosco
SHARE

If you watch a pigeon throughout the day, you’ll see it do so much more than peck for food and crap on statues. It may dance, chase another bird, clap its wings, kiss its mate, take off almost vertically, or feed milk to its young. A pigeon is living the complex, nuanced life of a modern-day dinosaur. Here are some of the behaviors you’ll see.

How to speak pigeon

Pigeons are famous for their cooing, but why do they do it? And how else do they communicate with their pigeon pals? Read on to uncover their full repertoire, from coos and grunts to claps and whistles.

What you’ll hear: a deep, partly trilled cooing sound that rises and then falls.

Why it happens: The display coo is all about showing off.

Even if you don’t know a ton about pigeons and doves, you probably know that they coo. And it really does sound like coo—the word “coo” is onomatopoeic. Note that not all members of the pigeon family make this sound; many do, but some produce weird quacks, chatters, and other noises. The orange dove, for example, sounds like a ticking metronome.

If you watch a pigeon coo, you’ll notice something weird. Whereas many songbirds open their beaks wide when they belt out a tune, a pigeon’s mouth stays shut the whole time. When a dove or pigeon coos, air passes through the syrinx (a vocal organ at the base of the windpipe) and builds up in that poofy expanding crop.

The display coo is a male pigeon’s song, though you’ll sometimes hear it from female pigeons, too. When a male is ready to mate, he makes this sound during the bow-coo display (see Singing and Dancing on page 162). Part of the song is a trill and part of it is more of an oo sound, though the particulars can vary. While display cooing, the male bows and spreads his tail, strutting around his potential mate. But he’s not just interested in wooing a female. He also wants to intimidate other males who might be hanging out nearby.

Why it happens: You’ll hear this call when a pigeon is looking for love, or when a pair is strengthening their bond at their nesting site.

If you’ve ever had pigeons nesting outside your apartment window, you know the advertising coo. It’s a really weird noise. Lacking the gentle trill of the display coo, it sounds oddly human, like a deep-voiced person going “Woo! WOO!”

Male pigeons make advertising coos when they’re ready to start a relationship. They hang out on a perch near a possible nest site and coo away until a female pigeon drops by to visit. Later, both males and females make this coo at the nesting spot. This may help reinforce their bond or encourage the male to go gather some twigs for the nest. The pair will complement the calls with a fetching display of head bobbing and delicate wing twitching.

What you’ll hear: a baby pigeon making a wheezy whistle.

Why it happens: The chick is encouraging its parents to bring it some food.

Odds are, you’ve heard this call without realizing it. Pigeon chicks can’t produce the deep-throated coos of adult birds until they’re seven to eight weeks old; instead, they make whistling, wheezing, high-pitched peeps. Once you start noticing these calls, you’ll find that there are hidden pigeon nests everywhere.

By crying out, a baby pigeon is saying, “Hey! I’m a baby, and I’m hungry! Gimme that milk!” The chick will often pair its call with urgent wing flaps. When it leaves the nest four to six weeks later, it’ll still whistle for a while to demand food or signal that it’s not a threat to nearby adults.

What you’ll hear: a loud slapping sound as a pigeon takes off.

Why it happens: It’s either a way to say “I just had sex” or an expression of alarm.

If you live in a city center, you’ve probably heard the clapping of startled pigeon wings echoing through the urban canyons. Pigeons make that sound on purpose. On the upswing of a flap, they slap the muscles and stiff feathers of their wingtips together. It’s sort of like holding your arms above your head and clapping with your palms turned away from each other.

Pigeons may clap when something startles them into flight, perhaps to warn other pigeons of danger or to scare an approaching predator. But there’s another big reason why pigeons make this sound: Males do it as part of a post-sex showoff display. It’s almost as if they’re applauding their own performance. We all know that guy.

What you’ll hear: a high-pitched whistling sound as a pigeon flies away.

Why it happens: This whistle may help warn other pigeons of approaching danger.

If you startle a pigeon, you’ll hear a wheezy whistle as it flaps away. This isn’t because its wings are sloppily constructed or because it’s panting heavily with the exertion. The whistle is a signal that conveys valuable intel to other pigeons.

When researchers took a close look at the wingtip plumes of pigeons, they discovered a specialized region that’s less stiff and flutters in the wind. Was it the source of the whistle? To find out, scientists Robert Niese and Bret Tobalske came up with an ingenious strategy: They grabbed a can of hairspray and applied it to that feather region to stiffen it. Did this dampen the whistle sound? It sure did! Though the whistly wingtip design may come at an aerodynamic cost, it likely helps a pigeon alert its pals of a threat.

To explore this idea, researchers tried recording the wing-­whistling sounds of another type of pigeon, the crested pigeon. When they played the sounds back to the pigeons, the birds burst into the air—the whistle served as a warning. This is what it sounds like when doves fly.

Pigeons make a few other noises, including:

• Alarm grunt: If a potential predator (or scary human) approaches a pigeon, it’ll utter a quick grunt. It may also whack the predator with its wings.

• Stomping feet: A pigeon may intentionally stomp its feet when it lands, possibly to express its annoyance.

• Hissing and beak snapping: When danger threatens the nest, baby pigeons hiss and snap their beaks to try to
scare away the intruder.

To read on, buy A Pocket Guide to Pigeon Watching: Getting to Know the World’s Most Misunderstood Bird.