3 wild ideas for how to stop a tornado

To stop a tornado, you first have to know how it's formed. 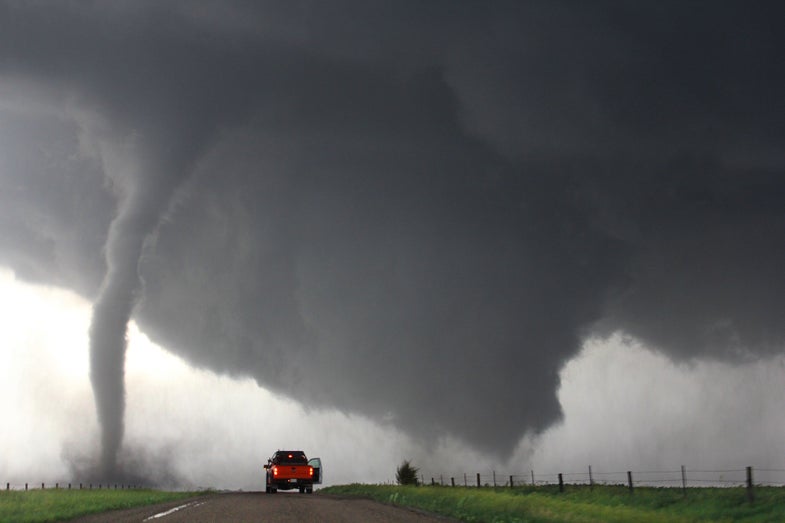 We don't know how to stop a tornado just yet. NOAA Weather in Focus Photo Contest 2015
SHARE

This post has been updated. It was originally published on July 10, 2003.

Reader Robert Hayes of Kailua-Kona, Hawaii, asks: “Is there some way a small, nondeadly atomic bomb could somehow blow apart a tornado as it forms, averting any damage the storm might bring?”

While some might assume this idea to be an absurd one, we were willing to check it out (even the “nondeadly atomic bomb” part). And lo, it turns out that researchers are currently hard at work devising ways to control the weather—particularly disastrous weather systems like tornados and hurricanes—and hope to put their ideas to the test in the coming decades. Any storm depends on a host of complex, interrelated drivers, like heat flows and wind movements. The basic anti-storm strategy is to take the smallest of these factors, the one most amenable to change, and change it—in the manner, say, of throwing a wrench into the smallest cog at a factory in hopes that disrupting one part of the system will cause the entire assembly line to shut down.

[Related: 8 otherworldly photos of tornadoes and other Midwest storms]

Yet disrupting even one little part of a storm system, especially a system as massive as a hurricane, which can produce as much energy as the total global power output, will be mighty difficult. Here are three ideas in the works:

1. Research indicates that in order to form, a tornado needs both a cold, rainy downdraft and a warm updraft. To stop a tornado from forming, just heat this cold downdraft until it’s cold no longer. And how would one do this, you ask? Simple: Blast it with beams of microwaves from a fleet of satellites. The satellites would collect solar energy, transform it into microwaves, and send a beam down to Earth. The beams would be focused on cold downdrafts, heating them like last night’s leftovers. The European Space Agency has funded initial studies on building this type of satellite, though it hopes to use the satellites as high-altitude solar-power stations, not as weather modifiers.

2. Hurricanes get most of their energy from evaporating seawater, which is why they quickly die out over land. To prevent this evaporation, spray a thin layer of oil over the water. This should stop, or at least weaken, a Caribbean hurricane before it devastates Miami.

3. Divert the path of a hurricane by heating the atmosphere in front of it, presumably with the aforementioned microwave satellites, or with a giant orbiting mirror that reflects the sun’s energy.

All this, as should be expected, is still at the extreme hypothetical stage. Not only will we need to develop the ability to monitor storms on a much finer scale than is currently possible, we’ll also have to create and coordinate the intervening energy sources. Yet localized weather control is not pure fantasy: A study published in Nature showed that high-altitude jet contrails create lower day-to-night temperature swings—without even blowing anything up.