And how do they feel about the season premiere of The Newsroom? 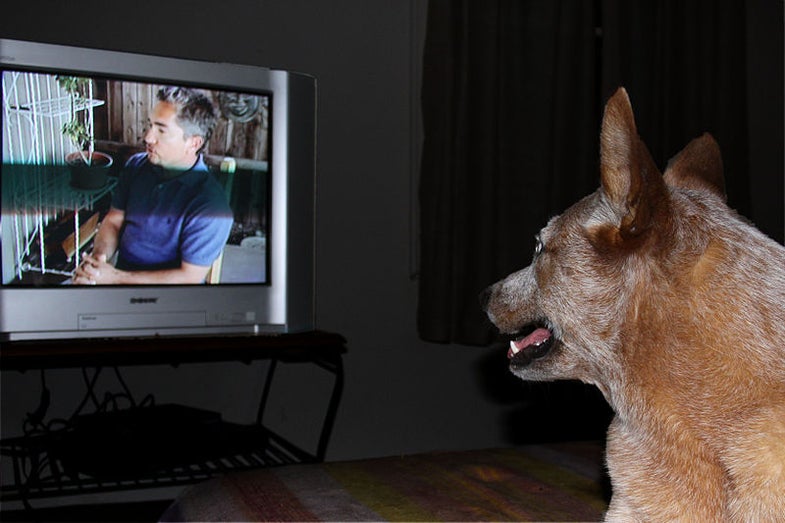 A TV channel explicitly aimed at canine viewers launched in Israel earlier this year, following a successful launch here in the States. But can dogs actually see what’s happening on a TV?

The BBC asked Stanley Coren, professor emeritus in the psychology department at the University of British Columbia and expert on the subject of the dog-human relationship, for help answering that question. (We’ve previously talked to Coren about domesticated foxes and whether animals dream.) His answer? Sure, dogs can watch TV, but it depends on a few optic factors as well as the temperament of the dog itself.

Refresh rate is the term that’s most important here–it refers to the speed at which an image is replaced by the next image on the screen. The first HDTVs had a refresh rate of 60Hz, meaning the screen draws 60 pictures each second. Our eyes can be fooled by about 50Hz, so we see a continuous moving picture. If you drop below that, we start to see flickering, like in a flip-book.

Dogs (and cats, though they’re not mentioned in the BBC article) have much sharper eyes than we do; dogs will still see that flicker up until about 75Hz. Luckily, newer TVs have much higher refresh rates, so you can grab a TV with a 120Hz, 240Hz, or even higher refresh rate. That’s needed for a dog to identify the picture as moving and not as a series of still images.

Positioning also seems to be important for dogs. They won’t pay much attention to TVs that are placed at the eye level of humans, since they’re not used to looking up there. TVs for dogs typically have to be placed on the ground for the dog to investigate and watch. And certain shots or styles of video are of more or less interest to dogs, too; videos that are shot low to the ground tend to hold a dog’s interest more, as do shots of animals (but not cartoon animals).

Helpful tips if you want your dog to share your interests! “Have a seat, Barkley. Game of Thrones is on.” Truly man’s best friend.